Review: The Sea Dreams It Is the Sky by John Hornor Jacobs - More2Read

The Sea Dreams It Is the Sky by John Hornor Jacobs 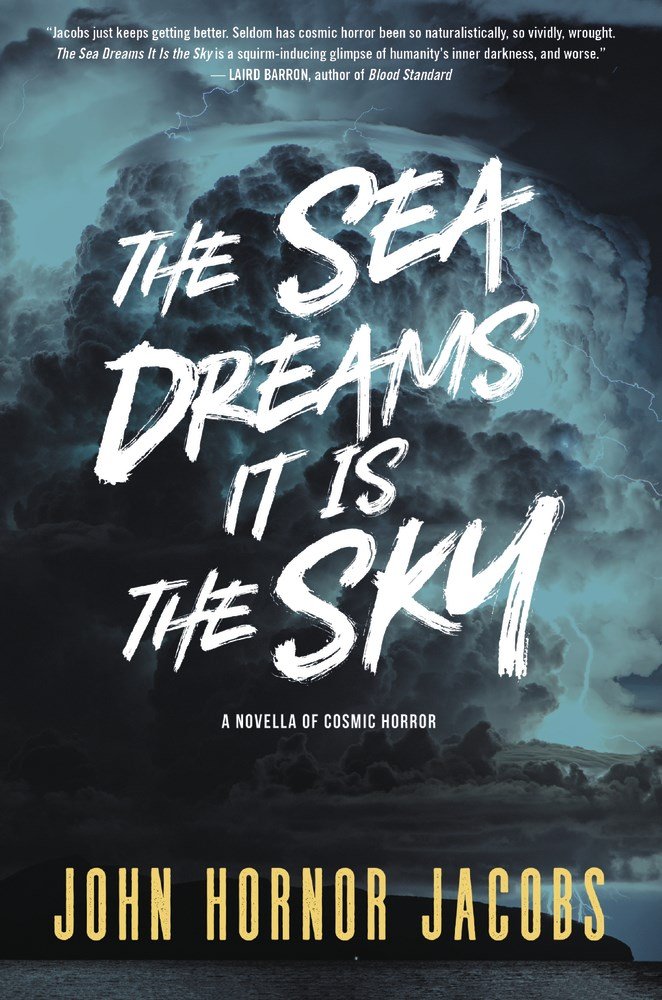 They had escaped their country, but they couldn’t escape the past

Having lost both her home and family to a brutal dictatorship, Isabel has fled to Spain, where she watches young, bronzed beauties and tries to forget the horrors that lie in her homeland.

Shadowing her always, attired in rumpled linen suits and an eyepatch, is “The Eye,” a fellow ex-pat and poet with a notorious reputation. An unlikely friendship blossoms, a kinship of shared grief. Then The Eye receives a mysterious note and suddenly returns home, his fate uncertain.

Left with the keys to The Eye’s apartment, Isabel finds two of his secret manuscripts: a halting translation of an ancient, profane work, and an evocative testament of his capture during the revolution. Both texts bear disturbing images of blood and torture, and the more Isabel reads the more she feels the inexplicable compulsion to go home.

It means a journey deep into a country torn by war, still ruled by a violent regime, but the idea of finding The Eye becomes ineluctable. Isabel feels the manuscripts pushing her to go. Her country is lost, and now her only friend is lost, too. What must she give to get them back? In the end, she has only herself left to sacrifice.

THE SEA DREAMS IT IS THE SKY asks:

How does someone simply give up their home…especially when their home won’t let them?

Praise for The Sea Dreams It Is the Sky:

“Jacobs just keeps getting better. Seldom has cosmic horror been so naturalistically, so vividly, wrought. The Sea Dreams It Is the Sky is a squirm-inducing glimpse of humanity’s inner darkness, and worse.” – Laird Barron, Award-winning author of Blood Standard, The Croning, and Occultations

“The author does an excellent job of immersing the reader in this culturally rich setting […] but it’s Avendaño’s backstory that is the Lovecraftian foundation of the story […] raising the story from something merely good to something deliciously sublime.” – Kirkus Reviews

“Equal turns poetic and hypnotic, Jacobs resurrects the surreal imagery of Jorge Louis Borges and couples it with visceral prose that cuts to the bone.” – Teresa Frohock, Author of Miserere: An Autumn Tale and Where Oblivion Dwells

Pages into a sensory journey of poet, and identity, writings and unravellings.
A reading Interlude in sporadic inceptions amidst reverie of disquietness nightmarish and dreamlike through possibly artistry, deciphering grotesque, macabre, tortures and need for safety with poetic prose viscerally into depths of pain and joy with watcher and teacher of words, amidst rebellion and the arcane.
Author has successfully crafted a memorable read that is gothic artistry, an inward and outward struggle and quest, a short work, writing about writers in framework of cosmic horror.

“I drank too much rum and scotch and wine and ate too many tortillas and cheese and lamb dripping with fat, packing on weight, a Lord Byron at the shore. I did not sleep well, despite the ocean only paces from my back door. When slumber totally eluded me, I would go down to the waves and wade in, head full of desperate and dark images, hoping the old cure, salt and foam, would wash away my shadow. But the thoughts remained.”

“I half fancied myself taking the passages and publishing them as The Sea Dreams It Is the Sky, my novel abandoned once and for all. This idea became firm in my mind. I began my real work, then. How to not just translate this from Latin, but elevate the ancient words to art?”

“The photos became words. The words became poems. The poems became frameworks for elements of my soul.”

Reviewed by Lou Pendergrast on 25 October 2018