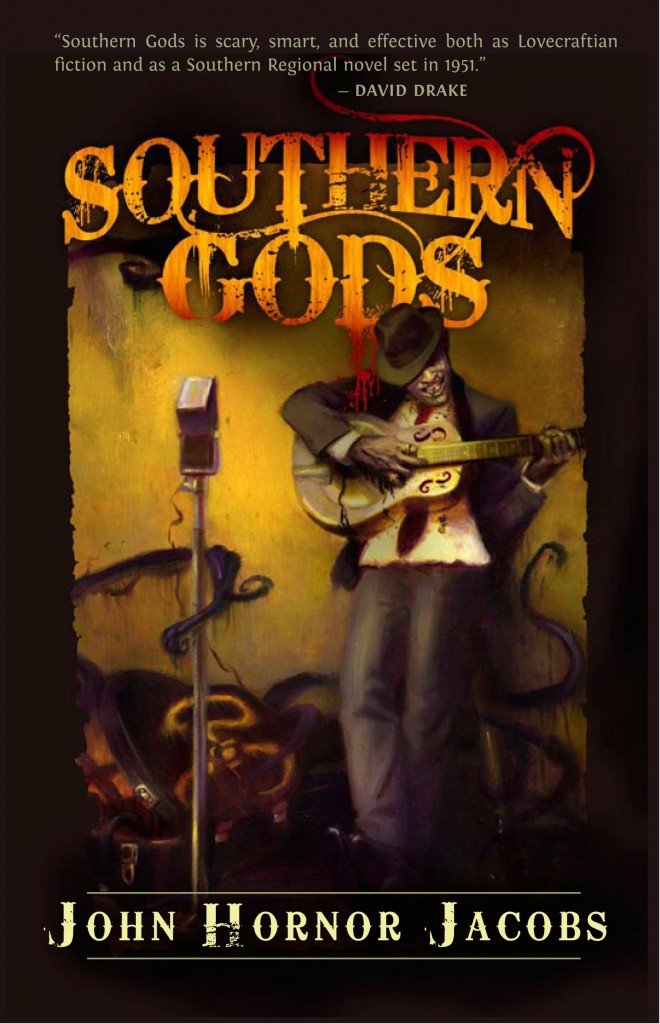 Disturbed and enraged by the bootleg recording the DJ plays for him, Ingram follows Hastur’s trail into the strange, uncivilized backwoods of Arkansas, where he hears rumors the musician has sold his soul to the Devil.

But as Ingram closes in on Hastur and those who have crossed his path, he’ll learn there are forces much more malevolent than the Devil and reckonings more painful than Hell . . .

In a masterful debut of Lovecraftian horror and Southern gothic menace, John Hornor Jacobs reveals the fragility of free will, the dangerous power of sacrifice, and the insidious strength of blood.

WINNER OF THE DARRELL AWARD FOR BEST NOVEL

“If you dig crime/horror/dark fantasy/southern gothic crossover… written with a confident voice and a haunting, poignant edge, pick up John Hornor Jacobs’ debut novel Southern Gods. I recommend it wholeheartedly and look forward to whatever else Jacobs presents to us next.”
– Tom Piccirilli, Four-Time Bram Stoker Award and Two-Time International Thriller Award winner

“A brilliant, smartly-written horror-noir novel, and one of those ideas that every writer worth their salt will say ‘Damn! Why didn’t I think to do that first?’”
– Brian Keene, Bram Stoker Award winning author of The Rising, City of the Dead, Kill Whitey, and The Conqueror Worms

“While Lovecraftian themes and imagery are pervasive, it is the tale’s depth of emotion that profoundly haunts. . . Southern Gods creates a malign magic all its own.”
– Hellnotes

“To say Southern Gods is just a gothic horror novel would do it a huge injustice. Hornor has created something much bigger and more important. He delves into the horrors of society and family, paralleling the blight of Hastur. The setting bleeds into the reader’s mind and pulls him or her into the author’s world.”
– Horror World

“If William Faulkner, Jim Thompson and H.P. Lovecraft had an orgiastic blood sacrifice ritual to honor the Old Ones in the Delta Swampland at the height of the muggy Deep South summer at midnight, Southern Gods would probably be the result.”
– Ed Kurtz, author of Bleed

“John Hornor Jacobs. Remember the name, because if there’s any justice in the universe, he’s going to be a big deal one day soon. John’s prose is by turns lyrical and tough-as-nails. He effortlessly conjures an eerie southern landscape that will surely haunt the dreams of anyone who reads Southern Gods.”
– Bryan Smith, Author of Darkened, House of Blood, and Kayla and the Devil

There is a music that once heard has an effect upon the listener and also there are books out there filled with pages that once glanced at have an effect upon the reader. Occult books that talk of other gods, worlds, and evil forces some may see them as Humbug and false but other know too well of their power over the reader and the deadly consequences of its recitation. Evil calls to itself and many characters in this story are to be caught in its path, an evil plan, a plan that only certain powers could destine for its subjects. One man Ingram, the main protagonist, an ex-marine nicknamed Bull due to his largeness, has been hired to track down some missing people. He finds himself in search of a mysterious musician and a music that stirs very obscure and Ill feelings within, destruction seems to be left in the path of the music. He is by trade a man for hire and has killed many, he will not hesitate to kill his enemy and deliver a blow with a sharp delivery of efficiency. Ingram finds himself caught in a web of a secret world filled with murder and vile acts perpetrated by the most darkest forces possible. This story brings me back to darkness present in stories written by H.P Lovecraft (by way of Robert Chambers) and Hjortsberg’s Falling Angel.
Fate delivers him to the doorstep of a woman and her children, they will discover that they need him more than ever as they too find themselves part of a bloody ill fate to come.

The author has successfully written a dark arcane story of blues and murder, he lays out the story well and really immerses you in an original story that deals with secret powers and books, all things dark and evil. He has conjured up characters that you will remember and keeps you wanting more to come in the story. A southern story with all things southern the landscape and the people but with a Lovecraftian twist of Gothic horror. I am really looking forward to his next complexed story of the arcane. He is a writer to watch out for and has already for his first novel be nominated for the Bram Stoker Award for superior achievement in a a first novel. A winner of the Darrell Award for best novel.

Reviewed by Lou Pendergrast on 04 April 2012