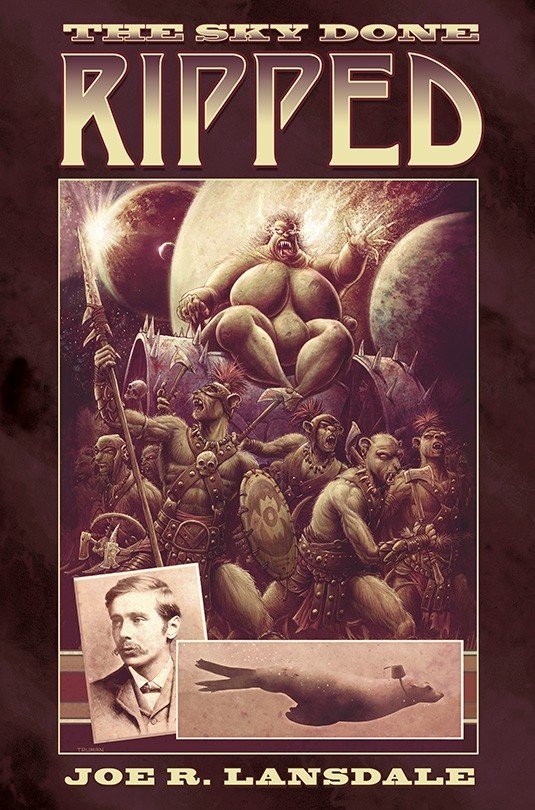 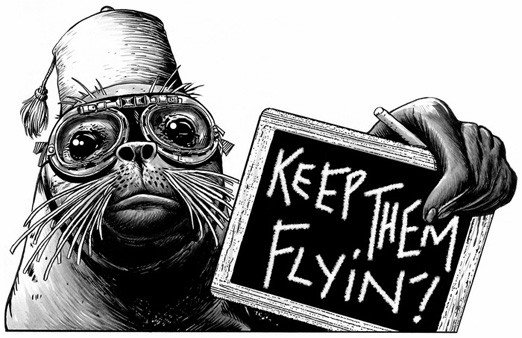 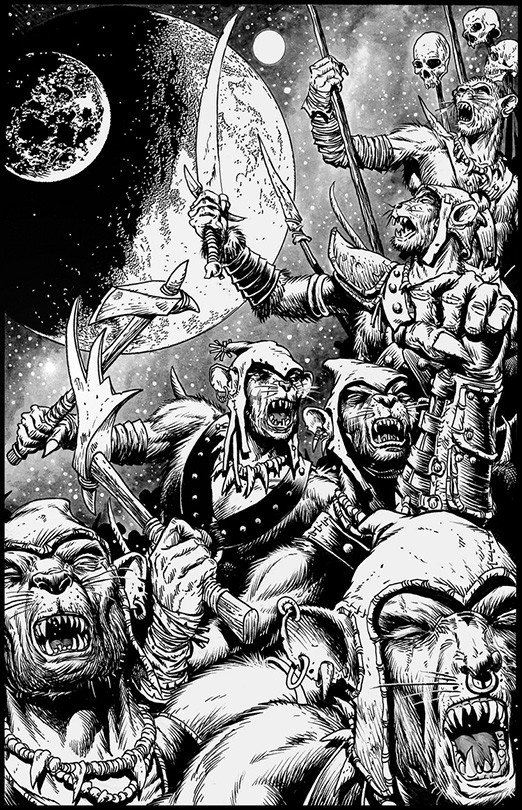 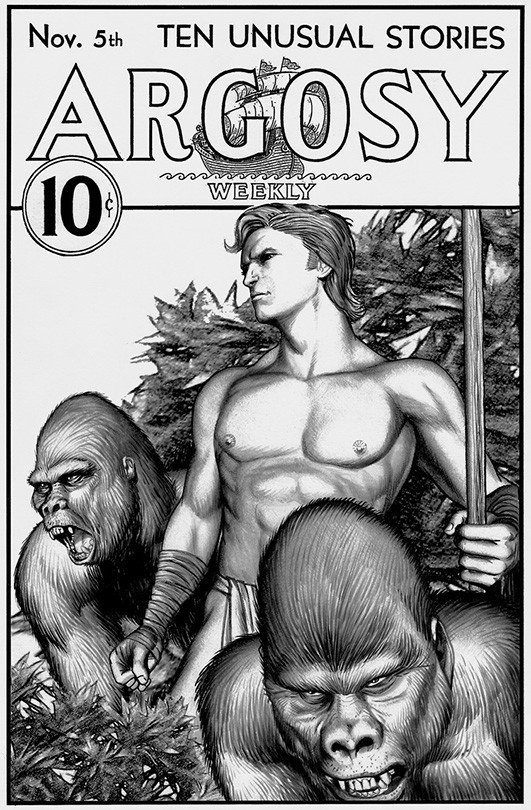 From the Inside Flap The Sky Done Ripped:

You might think two books of adventure involving Ned the brain-enhanced Seal would be enough for any little seal’s lifetime, but not so.

Ned and H. G. Wells, returning from correcting wounds in the fabric of time, not to mention a brief trip to an alternate Mars, have rescued two shipwreck survivors, Bongo Bill and Suzie Q. They have saved them from drowning or possibly being killed by alien invaders.

In the process of jumping from one dimension to another, trying to discover a time path home, they find themselves in an inner world with a stationary sun. It’s a warm world with jungles, rivers, and land-locked seas. It is full of primitive creatures, including dinosaurs, highly intelligent apes, cannibals, strange storms and bad hygiene.

Deciding on a brief picnic and minor exploration before jumping to Victorian England, Ned and his friends end up saving a famous apeman from human-eating birds, and soon set out to assist the apeman, Tango, in stealing a Golden Fleece with curative powers, a fleece skinned from the body of a strange space traveler. The fleece resides in a magnificent city, a kind of Shangri-La in the far Blue Mountains.

Their plan is to use the fleece to cure Tango’s beautiful wife, who has fallen into a coma. Nothing seems to cure her, but the rumored miraculous powers of the Golden Fleece just might.

If the world doesn’t kill them, then another survivor of the shipwreck from which Bongo Bill and Suzie Q were rescued just might. She has been pulled into a time warp and blended with the souls of marauding aliens, as well as the techno souls of their machines.

She has mutated. She has grown to great size. She has invented rolling machines that maul the trees and crush the earth, blend rocks and bones, blood and jungle into one vast wasteland. She has gained terrible powers, and lost all connection to humanity. She has become She Who Must Be Obeyed and Eats Lunch Early. Her whole purpose is chaos, and she has gathered an army to help her do just that. She has destroyed the villages she has come across and enslaved the inhabitants. She and her army are heading in the direction of the Blue Mountains, to the fabled city that contains the Golden Fleece.

Inevitably, she will collide with our heroes, and it won’t be pretty.

Come now to the worlds and times of Ned the Seal. Share his journeys, as he honks the horn on his power sled, avoids becoming a culinary prize of beasts and cannibals, and settles in for a meal of fish, baked or fried, dried or raw.

Cause the Sky Done Ripped and everything has gone to adventurous hell. And thank goodness.

Praise For The Sky Done Ripped:

“Lansdale puts his gift for pulp to great use in the rollicking third installment of the adventures of Ned the Seal (after 2010’s Flaming Zeppelins)… Lansdale combines elements from classic sci-fi adventure stories and mythology into a high-energy steampunk romp. Readers will revel in the humorously purple prose and spot-on illustrations by Timothy Truman.”
–Publishers Weekly

“…a bizarre romp through an inner Earth full of war machines, cannibals, and dinosaurs. Lansdale seems to have shifted away from the steampunk stylings of the earlier novels into H.R. Haggard-style pulp fiction (but with a lot more cursing and blood).”
–Booklist

“The Sky Done Ripped features Ned and H. G. Wells on their way home from dimension-hopping exploits with two shipwreck survivors in tow, on a lost world populated with dinosaurs, intelligent apes, an ape-man, human-eating birds, cannibals, and a Golden Fleece with curative powers. If any of that sounds intriguing, you’re primed and ready for Lansdale in full-blown pulp fiction mode.”
–Kirkus

A wonderfully crafted memorable likable character in Ned, the plucky seal wearing a fez, travelling on a sled with enhanced brain, ability to write with grafted thumbs, and capable engineering abilities with The Time Machine.

Planet of the Apes and Mad Max converging and into a tale that could convert to an adult rated animated film with its rip-roaring darkly humorous fully loaded fun ride escapade with the unforgettable Ned The Seal and She Who Must Be Obeyed and Eats Lunch Early.

There is a fluidity to his telling with the right word economy and usage, writing memorable characters, good and bad, his forte, a tilted twisted beautiful world he has created in this one that might just brighten up the end of year 2019.

Wonderful artwork by the great artist Timothy Truman will make this a sellout limited edition.

Here you have an example of author writing what he wants, not for the trend or mainstream, like that quote on writing by Dashiell Hammett to Black Mask magazine:
“If I stick to the stuff that I want to write-the stuff I enjoy writing-I can make a go if it, but when I try to grind out a yarn because I think there is a market for it, then I flop.”
-Dashiell Hammett
Letter to the editor, Black Mask, 1924.

“Hitch up your drawers and run like hell. Squeak and crunch, grind and squirt. The machines won’t stop. The mighty ones come with their mighty queen and all her slaves. Hide your men. Hide your women. Hide your children. Hide your supplies. Flee to the forests. Run like hell. Already people are dead and dying for miles and miles, and the ground is being paved with corpses and everything in the great army’s path is knocked down and smoked by fires.”

Near-hairless said, “My name is H. G. Wells, and this young aquatic gentleman is Ned the Seal.” Ned barked like a seal, of course.
“Is there an H. G. Wells on your world, an ape version?”
“Doesn’t ring a bell,” I said.
“Time Machine? It’s a book I wrote. Quite popular.”