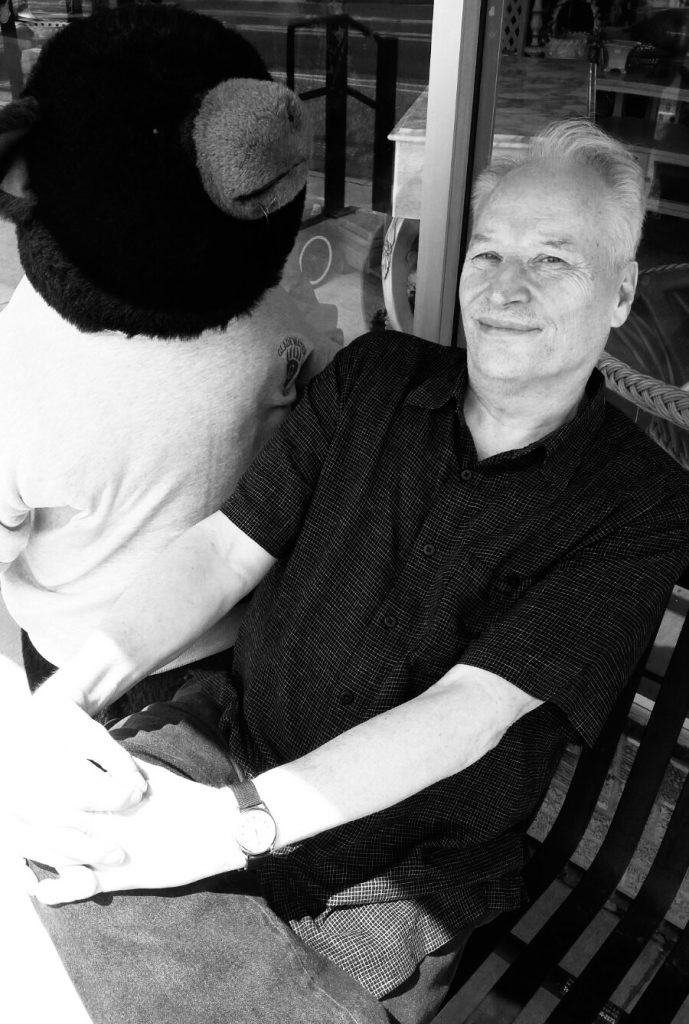 Lansdale has written novels and stories in many genres, including Western, horror, science fiction, mystery, and suspense.[1][2] He has also written for comics as well as Batman: The Animated Series. He has written 45 novels and published 30 short story collections along with many chapbooks and comic book adaptations. Several of his novels have been adapted to film and to television series.[3]

Frequent features of Lansdale’s writing are usually deeply ironic, strange or absurd situations or characters, such as Elvis Presleyand John F. Kennedy battling a soul-sucking Egyptian mummy in a nursing home (the plot of his Bram Stoker Award-nominated novella, Bubba Ho-Tep, which was made into a movie by Don Coscarelli).[4] He is the winner of the British Fantasy Award, the American Horror Award, the Edgar Award, and ten Bram Stoker Awards.

His Hap and Leonard series of ten novels, four novellas, and three short story collections feature two friends, Hap Collins and Leonard Pine, who live in the fictional town of Laborde, in East Texas, and find themselves solving a variety of often unpleasant crimes.[4] The characters themselves are an unlikely pairing; Hap is a white working class laborer in his mid forties who once protested against the war in Vietnam and spent time in federal prison rather than be drafted and Leonard is a gay black Vietnam vet. Both of them are accomplished fighters, and the stories (told from Hap’s narrative point of view) feature a great deal of violence, profanity and sex. Lansdale paints a picture of East Texas which is essentially “good” but blighted by racism, ignorance, urban and rural deprivation and corruption in public officials. Some of the subject matter is extremely dark, and includes scenes of brutal violence. These novels are also characterized by sharp humor and “wisecracking” dialogue.[5]These books have been adapted into a TV series for the SundanceTV channel[6] and a series of graphic novels will be published in early 2017.[7] Season 2 is based on the second Hap and Leonard novel Mucho Mojo and season 3, which premiered on 3/7/18, is based on the third novel The Two-Bear Mambo.[8]Much of Lansdale’s work has been issued and re-issued as limited editions by Subterranean Press[9] and as trade paperbacks by Vintage Crime/Black Lizard Publications.[10] His current new release publisher is Mulholland Books.[11]Lansdale also publishes with Dark Regions Press,[12] and Tachyon Publications.

Lansdale and daughter Kasey have started a new publishing company called Pandi Press to control the re-issue and publishing of his older works.[19]

Joe Lansdale just published his first book of essay and memoirs titled Miracles Ain’t What They Used To Be published by PM PressOutspoken Author Series.[20] His next release is a Hap and Leonard novel titled Jackrabbit Smileand is due for March 27, 2018.[21] He also, along his daughter Kasey, just released a collection of Dana Roberts mysterys titled Terror is our business: Dana Roberts Casebook of Horrors.

Nice to have a chance to chat again it was back in 2013 I had an interview with you, and since then Hap and Leonard had been adapted to screen. Has the TV show pushed beyond what you expected in audience following in your fiction between then and now?

I think it did pick up my sales and make more people aware of the series, as well as my non-series books. It was a great experience to have new readers and new fans, and I really liked the show. I had my beefs here and there, but I would. I created them. Overall, very good. At the end of it, though, it’s me and the keyboard. That’s what I care most about, though I also love film and TV, but not as much as books and prose. 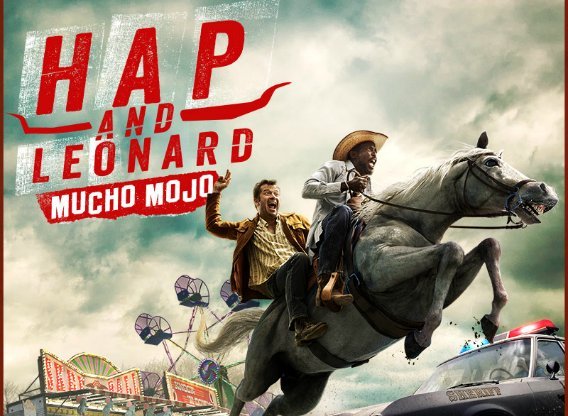 There was to be another season and then there wasn’t, what is happening with the show?

Well, there were three seasons, and that’s all I knew there would be, though we hoped for a fourth. But there was never a moment when a fourth was promised. I would have loved to have seen it continued, but as James Purefoy said, we had three great seasons. I concur. I also got to see Jim Mickle’s career rise, and my brother Nick Damici came off well because of it too.

COLD IN JULY was very nice. I was less involved with that. If I don’t feel I’m part of the team directly, then I don’t get involved, and a film is far different than a TV show where your characters, the ones you are best known for, are depicted weekly, so you’re more invested. Is this the end of the Hap and Leonard series in film? Who knows? 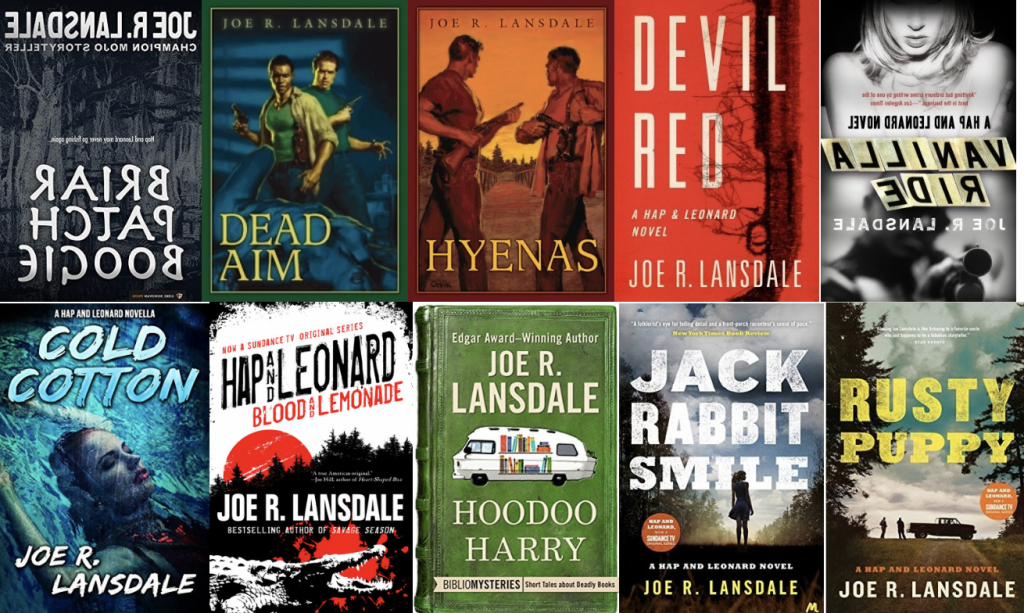 On the movie note, The Thicket was optioned for film, and that one great novel that many love, The Bottoms, is there any developments in them being adapted to screen?

Both of these are under option, and they are edging forward, but right now, it’s all in limbo for the moment. That can change at the drop of a hat, so we’ll see. 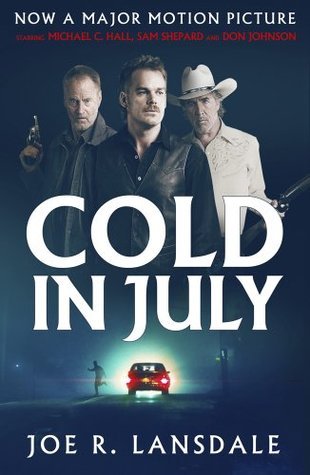 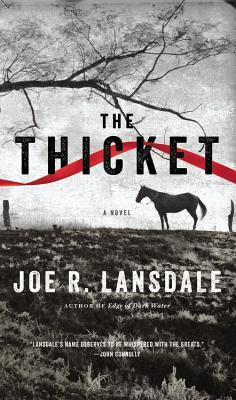 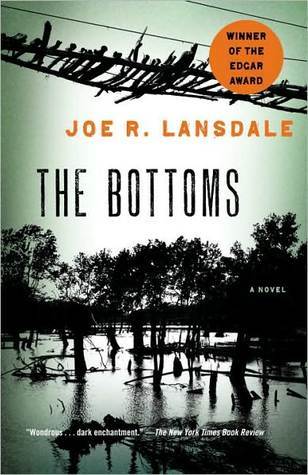 You have a new short story collection out, Driving to Geronimo’s Grave And Other Stories, do you have any history behind writing and inspiration behind the tales?

I have plenty of history behind the writing of the stories, and I present that in the back of the book, telling about each story, so I won’t give it away here. I think it’s a good and varied collection. Looks to be sold out on publication, but there are still places that have bought the book and will offer it, but my advice, if you want one, snap it up. 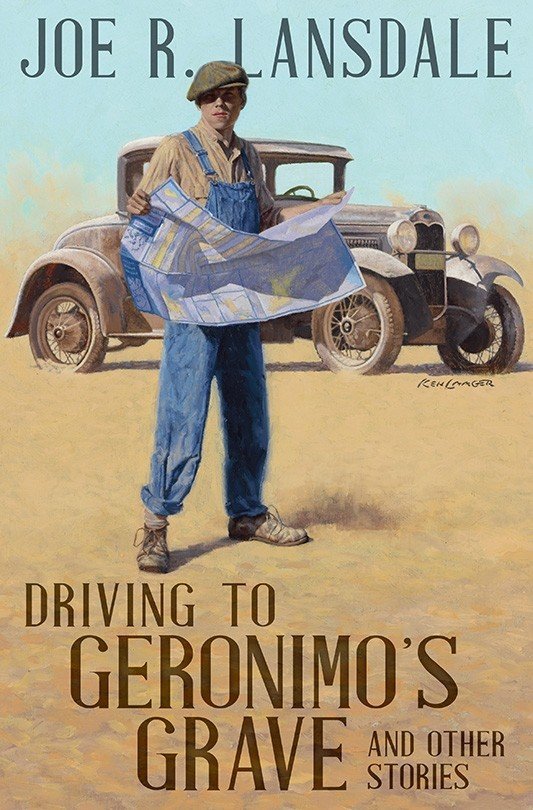 From the Dusty Great Depression to the far future, to the wild west, to the era of big fin automobiles, soda shops and double features, as well as dark journey on an icy ocean full of ravenous sharks and a fantastic shipwreck that leads its survivors into a nightmarish Lovecraftian world of monsters and mystery, Joe R. Lansdale returns with a pack of stories for your consumption and enjoyment.

Joe R. Lansdale has been writing novels and stories, as well as screenplays and comics, for over forty-five years, and this is his latest concoction, encompassing stories informed by a variety of genres, but not quite comfortably fitting into any of them.

The reason is simple.

Joe R. Lansdale is his own genre. 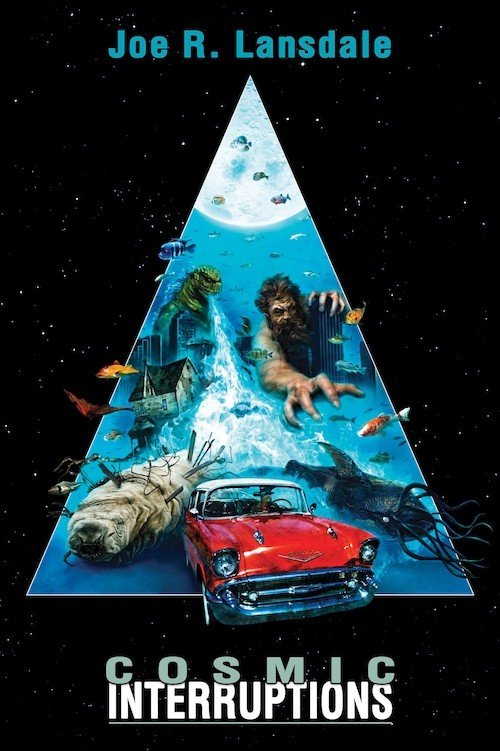 Cosmic Interruptions is a collection of speculative fiction by Joe R. Lansdale. The stories here have been grouped as part of a four part set, this first volume loosely falling into the speculative fiction, science fiction, and off-beat fantasy realm. The stories range from alternate universes to dark futures to the warping of time and space, and a variety of unclassifiable items. There is action, humor, whimsy, and a large dollop of what was once called A Sense of Wonder. Future volumes will gather tales of crime and mystery fiction, horror and East Texas Gothic, and historical and western stories. This is a unique chance to gather not only Lansdale’s popular stories, but some that are lesser known and should be known more broadly.

There were a few short stories in past works in collaboration with an author who passed away this year, Bill Crider. What’s the story behind that?

Bill Crider and I were dear friends. We love his entire family. He lost is wife a few years before his death, and Judy was very close to us all as well. Bill and I only wrote one story together, called A RIGHT TO BE DEAD, if I remember. It was no gem. Sold to a Canadian magazine BLACK CAT, I think was the title. All I remember is they tampered with the story, but again, it wasn’t a great one. We had fun writing it. I really wanted to turn his DAN RHODES series of books into a film, or TV series. It could still happen. I have collaborated very little in prose. I’m not drawn to it, but I had some fun collaborations with Lewis Shiner, and both of my children, Keith and Kasey, as well as my wife, Karen, and brother, John. 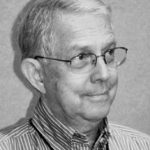 He received an M.A. at the University of North Texas, in Denton. Later, he taught English at Howard Payne University for twelve years, before earning a Ph.D. at the University of Texas at Austin, where he wrote a dissertation on the hardboiled detective novel. He then moved to Alvin, Texas, with his wife, where he was the Chair of the Division of English and Fine Arts at Alvin Community College. He retired in August 2002 to become a full-time writer.[1]

He was the author of the Professor Sally Good and the Carl Burns mysteries, the Sheriff Dan Rhodes series, the Truman Smith P.I. series, and wrote three books in the Stone: M.I.A. Hunter series under the pseudonym “Jack Buchanan”. He was also the writer of several westerns and horror novels. (Source https://en.wikipedia.org/wiki/Bill_Crider/a> ) 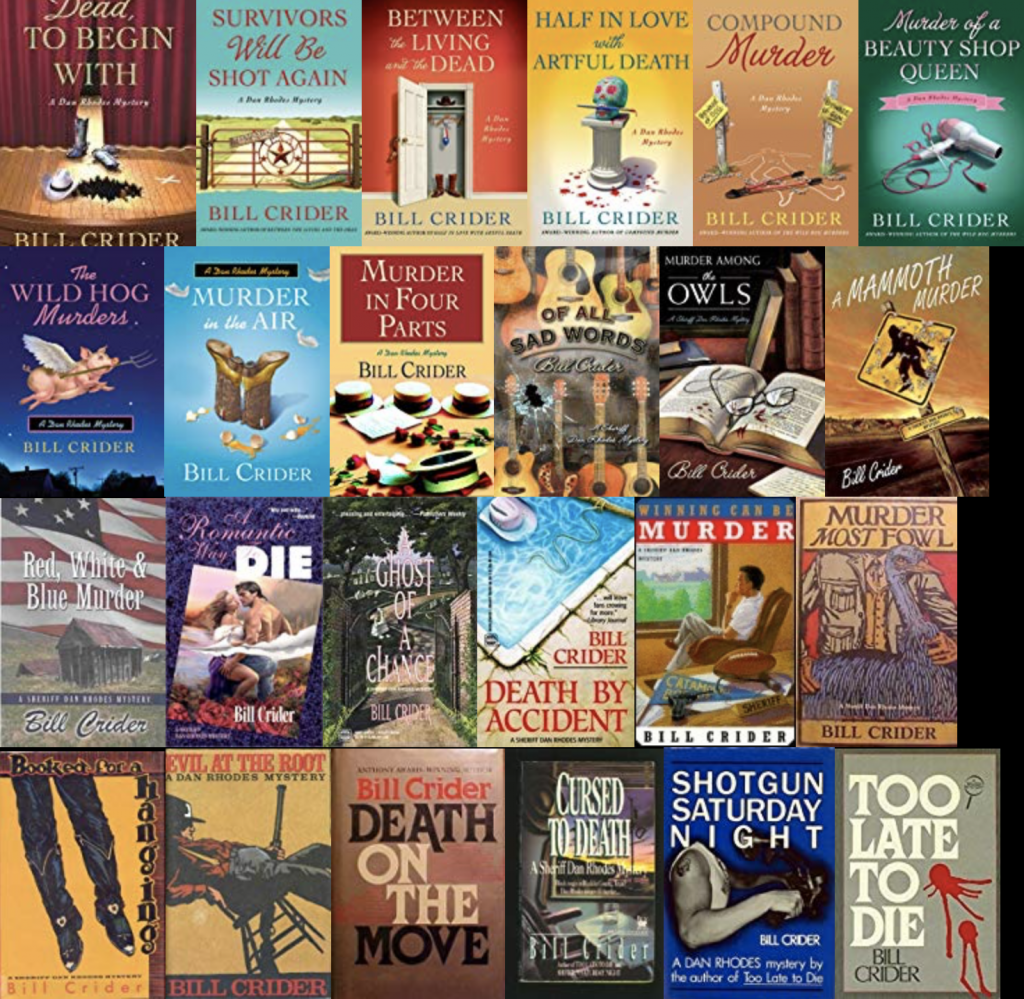 Many of your characters have a fight in them, they are fighters.
Is there one that brought they greatest joy to create and why?

Oh, I enjoy writing them all, as I grew up with boxing and martial arts. I was in a stupid bunch of altercations when I was young, because I was young and stupid. But I’ve been there, and have sparred in “sports” terms, so I have a feel for it as a writer, because I’ve had a feel of it in the flesh.

LP
What do you hope to achieve with your writing?

Joe Lansdale
I love doing it first, and it’s a fine way to make a living.

I like to think I have something to say at least now and then, and I’ve always seen Hap and Leonard as my way of being series oriented, action and crime based, and to deal frequently with social issues. One thing the show did was it drew awareness to that aspect more, though it was there all along, and had, of course, been noted before. But I think that revealed that under layer to potential readers.

Do you have any motto in life principles you think a writer needs in the writing path?

Joe Lansdale
Just read a lot and varied, and put your ass in a chair and write.

LP
Some writers go for morning or evening runs, others walk, along with the writing process.
Do you have any routines in physical activity?

I used to exercise a lot. As I’ve gotten older I walk and lift light weights and stretch. I teach private martial arts classes once a week. This is my fifty-fifth year as a martial artist, if I count the two years my dad taught me boxing, wrestling techniques and self defense. He was forty-two when I was born and had lived with my mom through the Great Depression. He fought at fairs for money, boxing and wrestling. He had experience, and he gave me my love for martial arts. Weight is a constant battle, even when I eat a quarter of what I used to eat. Getting older is a bitch.

LP
Thank you for your precious time and sharing your thoughts.

Reviewed by Lou Pendergrast on 14 September 2018