Nothing More Dangerous by Allen Eskens 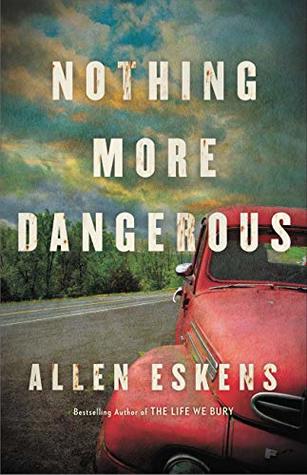 Nothing More Dangerous by Allen Eskens:

In a small town where loyalty to family and to “your people” carries the weight of a sacred oath, defying those unspoken rules can be a deadly proposition.

After fifteen years of growing up in the Ozark hills with his widowed mother, high-school freshman Boady Sanden is beyond ready to move on. He dreams of glass towers and cityscapes, driven by his desire to be anywhere other than Jessup, Missouri. The new kid at St. Ignatius High School, if he isn’t being pushed around, he is being completely ignored. Even his beloved woods, his playground as a child and his sanctuary as he grew older, seem to be closing in on him, suffocating him.

Then Thomas Elgin moves in across the road, and Boady’s life begins to twist and turn. Coming to know the Elgins-a black family settling into a community where notions of “us” and “them” carry the weight of history-forces Boady to rethink his understanding of the world he’s taken for granted. Secrets hidden in plain sight begin to unfold: the mother who wraps herself in the loss of her husband, the neighbor who carries the wounds of a mysterious past that he holds close , the quiet boss who is fighting his own hidden battle.

But the biggest secret of all is the disappearance of Lida Poe, the African-American woman who keeps the books at the local plastics factory. Word has it that Ms. Poe left town, along with a hundred thousand dollars of company money. Although Boady has never met the missing woman, he discovers that the threads of her life are woven into the deepest fabric of his world.

As the mystery of her fate plays out, Boady begins to see the stark lines of race and class that both bind and divide this small town, and he is forced to choose sides.

Praise For Allen Eskens:
“One of the most talented writers in mystery fiction today.”

“Eskens vividly renders how small towns try to keep their secrets, and how sometimes they cannot.”

A mystery tale that pulls the heart strings with a great bond of friendship with two young men amidst a fierce pull of injustice and murder.

There will be problem solving and things that make the heart move with this fine small town poignant mystery with at its core people in a web of good and evil.

There is a life buried within the story with the likable and memorable character Hoke, Boady, our young main protagonist of fifteen years of age, is set upon on a task in finding answers.

With all the injustice and crime, matters smouldering in Boady’s chest he is on the path to finding courage and some things just worth fighting for.

Lucid and clear storytelling using right technique and revealing to have you captivated.

Fine memorable characters with Hoke, Boady, and Thomas, ones forged and crafted in this tale, to be quoted and remembered by readers for many years to come.

“Out in front of me, the Ozark hills rolled along like a lumpy quilt on an unmade bed, the land all wrinkled and twisted like God had casually dropped it there as he passed by. I traced the long meandering line of the valley in front of me until my eyes came to rest on the hazy outline of a water tower eight miles away, proof of civilization beyond my woods.
It used to be that I would stand on that fence post and feel like a king, with miles of trees stretching out all around me. I knew every path, pond, creek and cave in those woods. I wandered over that terrain during endless summer days, inventing games that I could play by myself, cutting trails with my machete, and making elaborate campsites complete with fire pits and twine-string hammocks. I dug mud from the floors of rock outcroppings looking for abandoned treasure but finding only more mud. I made boats out of sun-dried turtle shells and floated them down the creek with crawdads for skippers. Those woods had been a nest that I once thought I would never want to leave.
But around the time I first stepped through the doors of St. Ignatius High School, my beloved woods began to change, the hills growing tall and foreboding—walls cutting me off from the rest of the world. I became preoccupied with thoughts of cityscapes and oceans, and the enormity of life beyond Jessup. What started out as an itch in my chest had festered to the point of near suffocation, and I knew that I had to get out of that town and away from the hell that was St. Ignatius. All I needed was a driver’s license and a car—and I had a plan to get both of those.”

“When I finally went home, I emerged from the woods to find Hoke sitting on his porch, writing in a large black book with a red spine. There had to be more than one of those books, black with the red spine, because in my earliest memories of Hoke, he held that book on his lap, a pencil sticking up from the fingers of his good hand as he scribbled his thoughts.
I had asked him a few times what he was writing, and he replied with vague comments like he was exorcising ghosts or answering questions that no one yet knew to ask. He would say things like that, and as a little kid I felt like I should know what he was talking about but didn’t, so I never pushed the issue. As I got older, though, I understood that his answers were meant to divert the conversation away from his books. He wanted to keep his secrets, and so I let him.”

“Boady, there are some words that carry the weight of history, and that’s one of them. It’s a word we came up with so that we could make that whole race of people something less than we are. Us and them, remember?”

It’s like Dr. King said: ‘Nothing in all the world is more dangerous than sincere ignorance.’ Sometimes I think that’s the truest thing a man’s ever said.”

Allen Eskens is the USA Today-bestselling author of The Life We Bury, The Guise of Another and The Heavens May Fall. His debut novel, The Life We Bury, has been published in 16 languages and is being developed for a feature film.
He now lives with his wife, Joely, in out-state Minnesota where he has been a practicing criminal defense attorney for 25 years.
Reviewed by Lou Pendergrast on 14 November 2019