Interview with Steve Toase On his collection To Drown in Dark Water, Writing, and Folk Horror - More2Read

Interview with Steve Toase On his collection To Drown in Dark Water, Writing, and Folk Horror 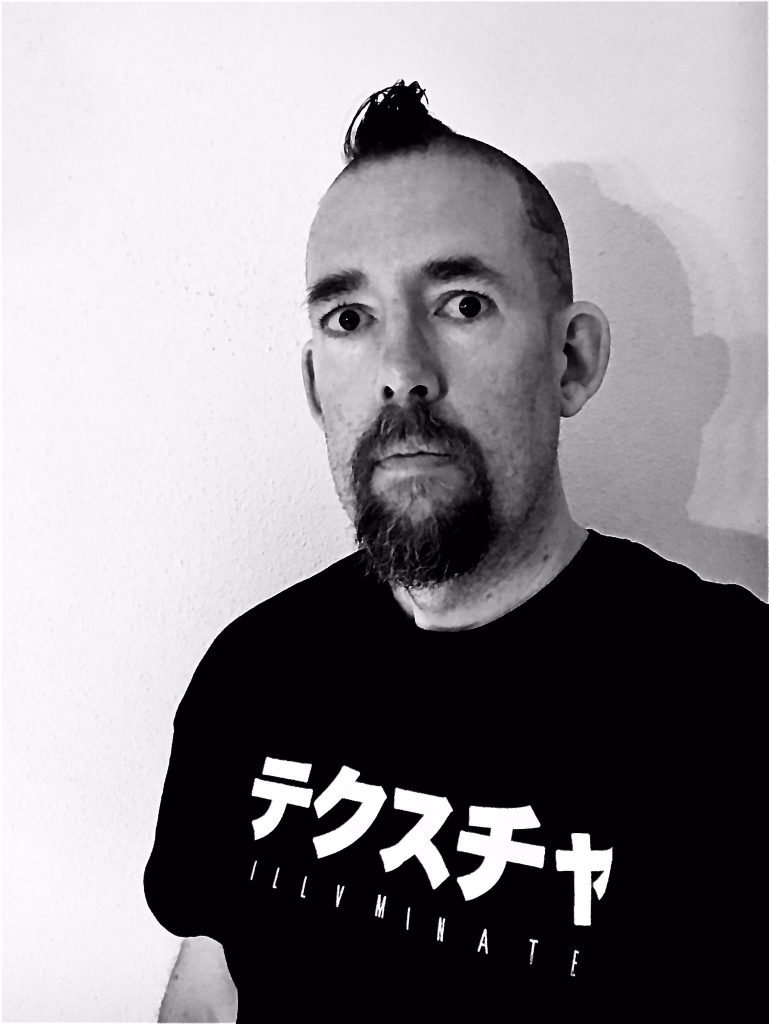 Steve Toase was born in North Yorkshire, England, and now lives in Munich, Germany
He writes regularly for Fortean Times and Folklore Thursday. His fiction has appeared in Nightmare Magazine, Shadows & Tall Trees 8, Nox Pareidolia, Three Lobed Burning Eye, Shimmer, and Lackington’s. Three of his stories have been reprinted in Ellen Datlow’s Best Horror of the Year anthologies.

The Interview with Steve Toase

Welcome and thanks for this time to chat on writing.
Congratulations on your debut story collection To Drown in Dark Water.

What are the books and the story behind this collection as a whole?
For instance aspects like having the first goal and aim of having a collection, to choosing the name, and the books and inspirations of the past behind the crafting the kind of stories in here.

Putting together the collection was very much down to timing. I wanted to be in a position to have a good track record of stories to form the core of the collection, with enough solid unpublished material to showcase my work. I also wanted to find the right publisher and feel very lucky Michael Kelly saw something in my work that fitted with the tone of Undertow.

The title was inspired by a British Public Information Film from the 1970s called The Spirit of Dark and Lonely Water, then we found Stefan Koidl’s artwork for the cover and everything fell into place.

In terms of inspiration, I grew up reading collections like Twisters: Stories of the Sinister and Macabre edited by Steve Bowles, and Roald Dahl’s Wonderful Story of Henry Sugar. Later I discovered Clive Barker’s Books of Blood and Angela Carter’s short stories. All of these fed into how a collection of stories can be extremely unsettling.

Three tales in this collection, Children of the rotting straw, Atelier, and Under the Banner of the Black Stamen, what was the seed and inspiration behind them and what do you hope to communicate with these great stories?

Children of the Rotting Straw was inspired by a line that came from nowhere and I was quick enough to write down. ‘The sky was made of sticks’. Everything else came later, but I knew once I had that central overarching image it was going to be odd, off kilter; almost fairy tale like in the way the story unfolds, and it does take influence from a specific folk tale. Also I think scarecrows are extremely disturbing.

Atelier really comes from my love of Munich and the art of Munich. The first time we visited Munich was a birthday trip so my wife could see the Franz Marc paintings held at the Lenbachhaus art gallery. Atelier is set at the time of the first Der Blaue Reiter exhibition, and several of the images in the story take inspiration from artwork by Kandinsky and Marianne Von Werefkin. I don’t normally write stories that have a historical setting, but this gave me a chance to research some of the places associated with the art scene at the time. I also wanted to use that style of storytelling often seen in cosmic horror and work by writers like MR James where the story is told by another party who has in turn been told the story.

The tale The Kromlau Gambit and The Jaws of Ouroboros has a villain character Papa Yaga, what is the inspiration behind him?
Will he get another chance on the page in the future?

Papa Yaga is one of my favourite creations (but credit must go to my wife Annie for coming up with the name). He’s essentially a gender flipped Baba Yaga (the walking dragline where he has his base in The Jaws of Ouroboros is a nod to Baba Yaga’s chicken legged hut), who is incredibly powerful, has a moral centre but it is so far skewed to one side that he is almost pure evil, certainly for anyone who crosses him.

I do have another Papa Yaga story in my drafts and I definitely want to return to him because he is so much fun to write! 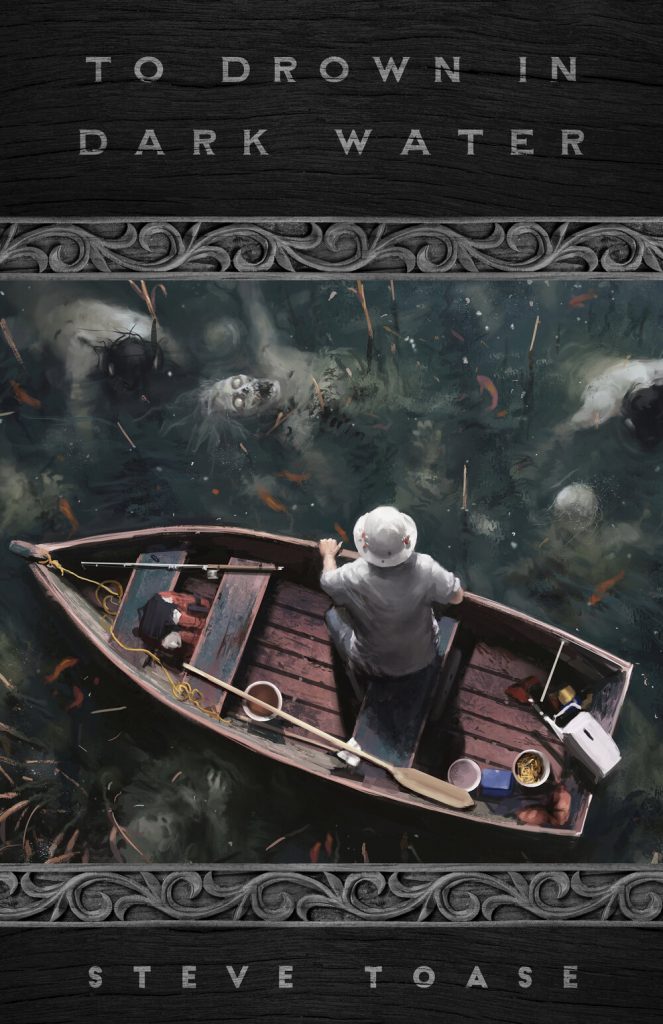 Take me back to your writing beginnings.
When you decided to seriously start crafting your first short story. What are your memories of that?

I dabbled with poetry when I was little (I still have the first book I wrote in), but my first short stories were at school. I think I was in third year at secondary school and wrote a vast (for me) fantasy story that filled at least two exercise books. As an adult I started writing fiction in the early 2000s, and wrote a short story inspired by the name of the park opposite where we lived (Charlie Cake Park in Armley, Leeds). We made a little booklet of it, with illustrations by my wife, and gave it as a present to our friends.

When, where, and with what do you do your writing?

I write three days a week. As well as fiction I also write for magazines. I have a regular page reviewing comics for Fortean Times, and have written for motorbike magazines since around 2007. At the moment I’m very lucky to have a home office (nicknamed the oubliette) in the cellar of the apartment block we live. I write pretty much exclusively on a laptop because my handwriting is atrocious.

What do you hope to communicate and have the reader experience with your writings?

I want to unsettle people. I rarely go for the jump scare. I prefer to write stories that have an inevitability to them. You realise the horrific outcome is on its way but there is absolutely nothing that can be done to stop it. [slight spoiler] There’s a scene near the end of the This Is England TV series where some men put one of the characters in the back of a van and you know that the person is not coming back. I think powerlessness is the most horrifying thing to experience.

Another side to that is I write about grief a lot, sometimes very obviously like in Green Grows the Grief, sometimes not so blatant, and with those stories I want to try and capture that feeling. There’s a powerlessness there too.

What writing advice would you share with aspiring author?

Find time to write. If you can put down a sentence a day you’ll soon have a story. If you only have two hours to write on a weekend, crack on.

If you don’t have a lot of time to sit down in front of a keyboard you can use the time when you’re working on your day job or looking after your kids to think about your stories and characters. By the time you do sit down you will have a lot of your ideas put together already

Don’t self reject. When you do start submitting work, plan a route for your submissions. Use Submission Grinder or Duotrope etc to research your markets and aim for the best paying and leading magazines. If they reject your story, move onto the next one. Eventually you’ll find someone who will click with your work. Whether you’re rejected or accepted, remember your manners, and if you are rejected don’t reply. Just move on to the next submission.

What would be your recommended folk horror fiction reading?

Folk horror is quite a difficult genre to pin down because until recently it’s one that has very much been created in retrospect. What I mean is there isn’t one unifying element that can define folk horror. The borders of the genre are still amorphous, expanding to include many different works. Shirley Jackson’s The Lottery is folk horror as is M.R. James, and to a degree The Willows by Algernon Blackwood.

What’s really interesting is seeing how folk horror is realised in different writing traditions, for example in the work of Nin Harris.

For me one of my favourite short stories by Clive Barker, In The Hills, The Cities, is most definitely folk horror.

I would recommend the Fiends in the Furrows anthologies from Nosetouch Press (I’m a bit biased as The Jaws of Ouroboros was published in the first volume).

I’d also recommend We, The Folk by G.V. Anderson in Nightmare Magazine. I’d also recommend looking at the books put out by Wyrd Harvest Press (the press associated with Folk Horror Revival) who are have put out some excellent books looking at different aspects of the genre.

Thistlebone, a comic coming out from Rebellion Press, is a very good take on folk horror, as is Through the Woods by Emily Carroll. In fact comics are one area where folk horror has really taken hold, with some excellent explorations of the genre. 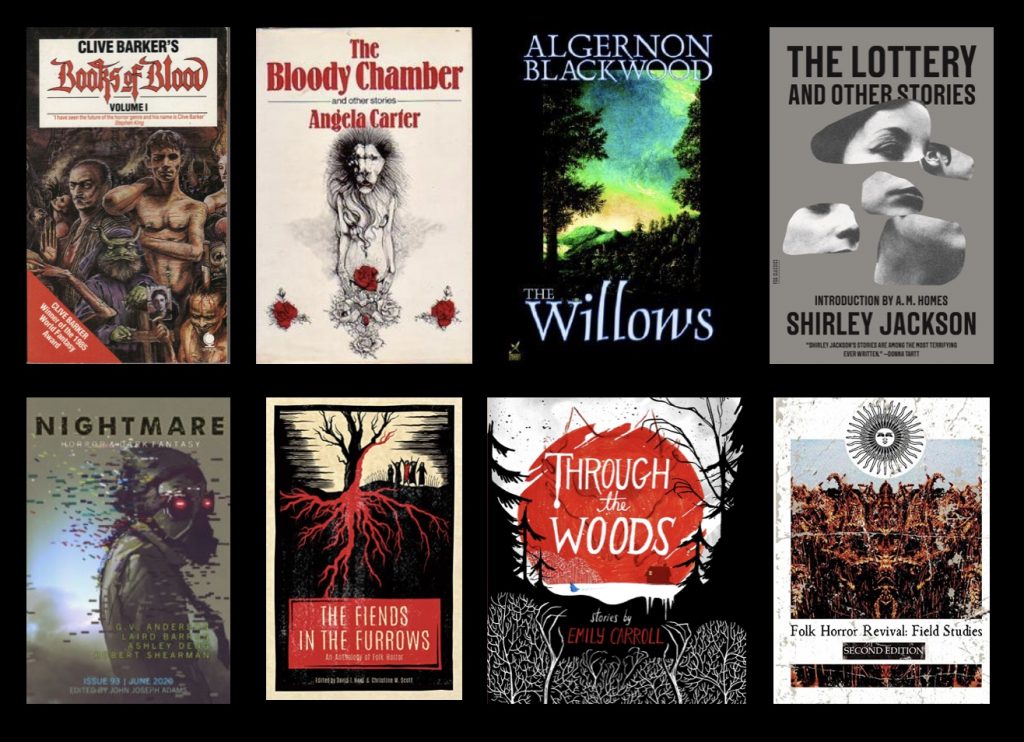 Movies, there have been a few good ones of recent with a folk horror theme.
Which are your favorite folk horror movies?

Robin Redbreast is a fantastic early folk horror film. One of my favourites (as much for how daft parts of it are) is Psychomania, a biker occult film from 1973. From the more recent consciously folk horror films I love Kill List, The VVitch, and Midsommar. Also, and I don’t think this is often included in folk horror lists, I would highly recommend the German film Das weiße Band.

To dive into this in far more detail I would recommend joining the Folk Horror Revival Facebook group, and for film picking up Howard David Ingham’s book We Don’t Go Back: A Watcher’s Guide to Folk Horror. 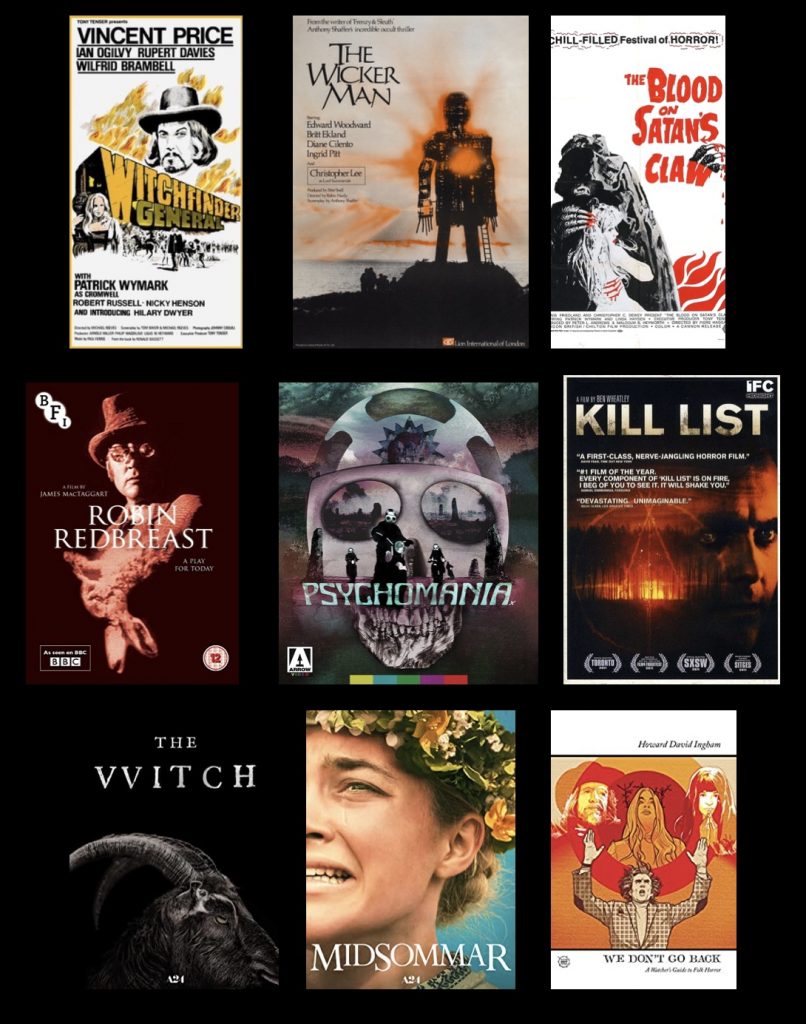 The books you would pick up again to read and have picked up many times before. What are they and what aspects of the story you love?

The Robert Holdstock Mythago Wood series still remain a solid favourite, particularly Lavondyss. Also Merlin’s Wood, the collection of his short fiction. I love the way they explore how people engage with myth and place. There’s a story in Merlin’s Wood called Earth and Stone which is one of my favourite archaeology stories.

Italo Calvino’s Invisible Cities, and China Mieville’s The City and The City. Both deal with a sense of place, and how we relate to and filter our experience. With the idea of unseeing Mieville distils ideas of how we unsee in the real world, from the citizens of East Germany not seeing Westerners in the service stations on the route to West Berlin, to the way people ‘unsee’ people experiencing homelessness.

Never Let Me Go by Kazuo Ishiguro. Just the absolute banality of the horror is beautifully written.

I also read a lot of comics. I’ve recently been working my way through loads of Vertigo comics like Sandman, The Invisibles, Y The Last Man, Hellblazer, and Doom Patrol.

Anything you read of recent months and years that you would recommend?

Tracey Fahey’s new collection I Spit Myself Out. I’m currently reading Sing My Sadness Deep by Laura Mauro which is a stunning collection. The Bone Weaver’s Orchard by Sarah Read. Mexican Gothic by Silvia Moreno-Garcia. The Other Side by Alfred Kubin. Comicswise, I would highly recommend Vicious Creatures by Sarah Gordon. 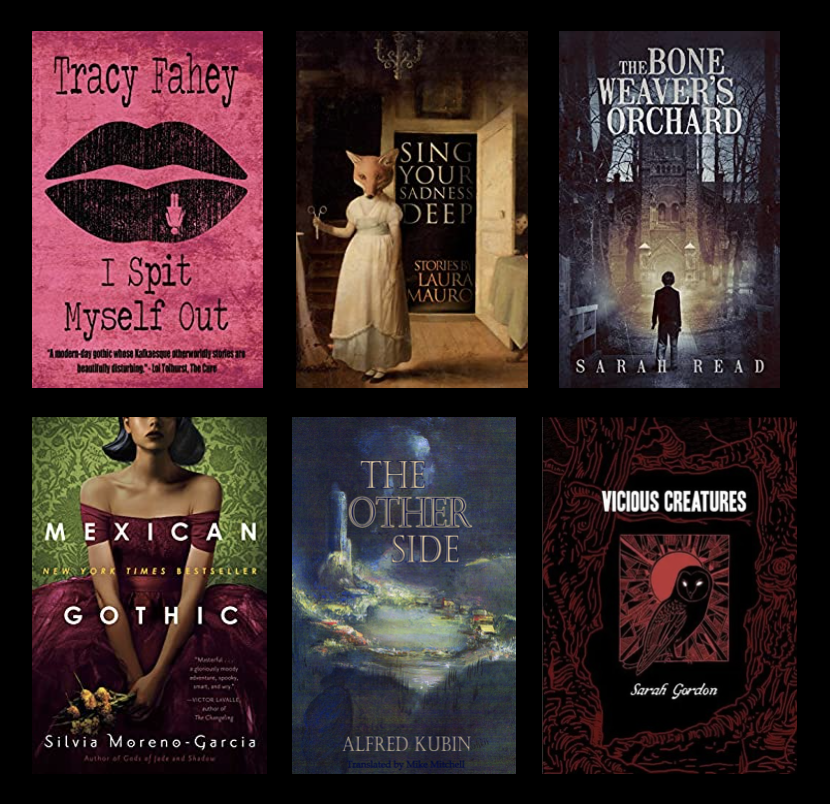 Thank you for your precious time to sit and share on writing.

His first short story collection ‘To Drown In Dark Water’ is due out from Undertow Publications on the 27th April.

Reviewed by Lou Pendergrast on 13 April 2021