To Drown in Dark Water by Steve Toase 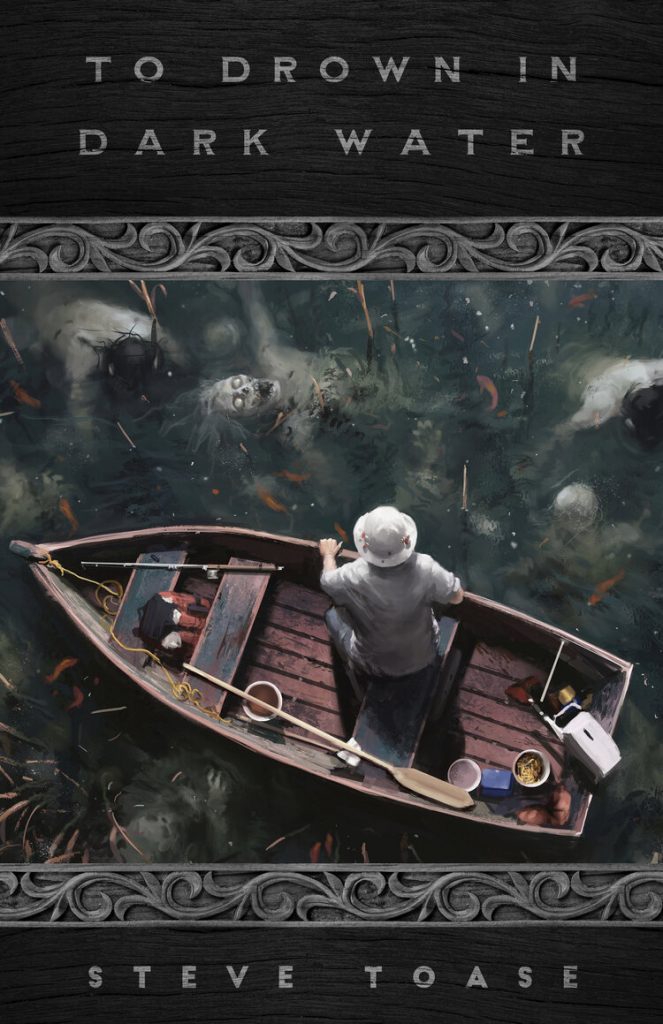 About To Drown in Dark Water:

The debut short story collection from Steve Toase heralds the arrival of a transcendent visionary of modern horror, a melding of the beauty and terror of Clive Barker and Tanith Lee, with Steve’s distinctive visceral and vibrant voice. Containing 6 new dark visions and a curated selection of reprints, including 3 stories from the acclaimed Best Horror of the Year series, To Drown in Dark Water is a veritable feast of gruesome delights.

Praise For To Drown in Dark Water:

“There are masters of folk horror and masters of weird horror; there are masters of cosmic horror and masters of psychological horror. But on the Venn diagram where all those intersect, there is only Steve Toase. “To Drown in Dark Water” is a masterpiece debut collection from an author of astounding promise. Everyone is going to be talking about this book.”
—Sarah Read, Bram Stoker and This is Horror Award-winning author of The Bone Weaver’s Orchard and Out of Water.

“To Drown in Dark Water carries the reader on strange tides to worlds both weird and familiar; to worship ancient folk-gods and terrifying new deities. The stories contained herein are compassionate, elegant, and sharp as a knife. Steve Toase is an immensely skilled storyteller weaving vital new mythologies for a world on the cusp of great and terrifying change.”
– Laura Mauro, British Fantasy Award-winning author of Sing Your Sadness Deep

An unsettling strangeness remains after this collections completion with these characters amidst terrors of the straw, land, sea, death, rituals, and within.
The author has carefully crafted disturbing scenes with originality and pitted characters against all kinds of horrors with an extra dose of story imagination.

Call Out
A creature enters the moors and a vet is faced with the terror before him and the land owner by his side all things brought into ones focus and hearts yearn for salvation and safety, a visceral little folk horror.

“Opening the field gate, Malcolm sensed something born wrong sheltered in the old cattle shed. The sickly sweet smell of decay spread across the hillside. Round his feet, half-blind, featherless jackdaws cawed.”

“As a country vet, he was used to rot. Hoof infections, orf, or abscesses, his work year was filled with the scent of decaying flesh. This was something else. Like bathing in abattoir waste.”

“Somewhere deep inside, in the place that cocooned stories, he realized he must turn his back. If he didn’t, and soon, his heart would turn itself inside out of his chest in sympathy.”

The Kromlau Gambit
Talk of ritual, meteors, and space, a cosmic horror short.

“Quite literally a key. Over many centuries man has pigmented the earth with religion and magic and superstition. The taint of ritual has settled against the upper atmosphere, replicating a protective magical circle around the globe.”

“You see gentlemen. If we work together we can achieve great things. A pure soul is a delicate flavour. One to be savoured. Like fine caviar. Something I’m sure you gentlemen, as loyal party members, will be familiar with. A good untainted soul settles on one’s tongue. Nip the edge with an incisor and the flavour slides down one’s throat.”

Winter home
There to be an annual ritual with an animal sacrifice.

Green Grows the Grief
There is grief with Sophie in a state of bereavement but also amidst strange developments as she gets through this time of ghost and growth, with seeds and bones and strange expectations.

Not all the Coal that is Dug Warms the World
A little pain within, deep chronic and life changing, but there is home help and daughter at hand to aid but also there is money to be made, unethically cultured minerals, along with the pain.
This story evoking empathy and unease for suffering poor soul.

“When I turned 44 I knew I would never be well again. A dense erosion in the depths of my bones that I curled up around saw to that.”

Children of the rotting straw
There be will be straw and deadly scarecrows, a harvest is due,and a need for wool, and young girls wearing harvesting suits in the motion, all part of your reading time immersed in strange world crafted with folk horror.

Beneath The Forest’s Wilting Leaves
Father and son walk in woods, son discovers something, eventually after few trips, a collection is made of these small treasures and findings. One day they decide to camp in the woods and fates shift.
Folk horror.

“No-one ever saw them return to the place beyond the sky of sticks, but everyone saw the beds left empty of children.”

“There were no people, no-one taking breath, just the children of the rotting straw.”

No Sun to Guide the Way
New shop owners needing to clean up and repairs due along with a woman in the water and horrors.

Atelier
New painting job for an artist at the The atelier, she is in for a little absurdities, strangeness and troubles with an unknown patron to paint. A disturbingly strange good tale.

“Munich drowned.
Rainwater collected on the gallery floor, each room heavy with the scent of sweat and damp wool. I tried to concentrate on the Franz Marc in front of me but the showers hitting the window glass took my thoughts away.”

“It is not easy to make a living as an artist in this city, and it is not easy to be revolutionary or experimental, especially if you graduated from the Künstlerinnen-Verein with no inheritance behind you. As you may have guessed I do not have rich dead relatives.”

“She would make herself available twice a week for portrait sittings with the unnamed patron.”

Under the Banner of the Black Stamen
A haunting journey across the seas accompanied by Sabine, the dead and Psychopomps.

“Sabine cannot see the archipelago. It is hidden as all islands of the dead should be. A bank of fog runs down the middle of The Channel, the white cliffs beyond hidden for a generation. The stories say it is held in place by the spirits of the dead, their buttoned fingers pinning the strands of fret to the sea floor. She does not know if that is true, but every time the ferry passes through the fog the cold gets into her bones like un-exorcised spirits.”

“At one time, when the ferries brought the living back and forth, the goal was to move as fast as possible. Be the quickest on the water. Now that the only cargo is those that do not breathe, and those that do not have a choice, the ferries go slow and mournful. There is little for Sabine to”

Our Lady of The Tarpaulin
There be a goddess made of wood and a crowd, a congregation celebrating, and transgressions.

Dancing Sober in The Dust
A researcher with interest of a museums costume artefacts.
Horrifying costumes to dance in and perform, with blood and pain.

The Jaws of Ouroboros
There will be calculated precise killings and stone circles.
The ground they stand on is a danger, eating up what it can.
Papa Yaga a shady character who appears also in The Kromlau Gambit story.

Steve Toase was born in North Yorkshire, England, and now lives in Munich, Germany. He writes regularly for Fortean Times and Folklore Thursday. His fiction has appeared in Nightmare Magazine, Shadows & Tall Trees 8, Nox Pareidolia, Three Lobed Burning Eye, Shimmer, and Lackington’s. In 2014 “Call Out” was reprinted in The Best Horror Of The Year 6, and two of his stories were published in Best Horror of the Year 11. He also likes old motorbikes and vintage cocktails. You can find him at stevetoase.co.uk

Reviewed by Lou Pendergrast on 26 April 2021