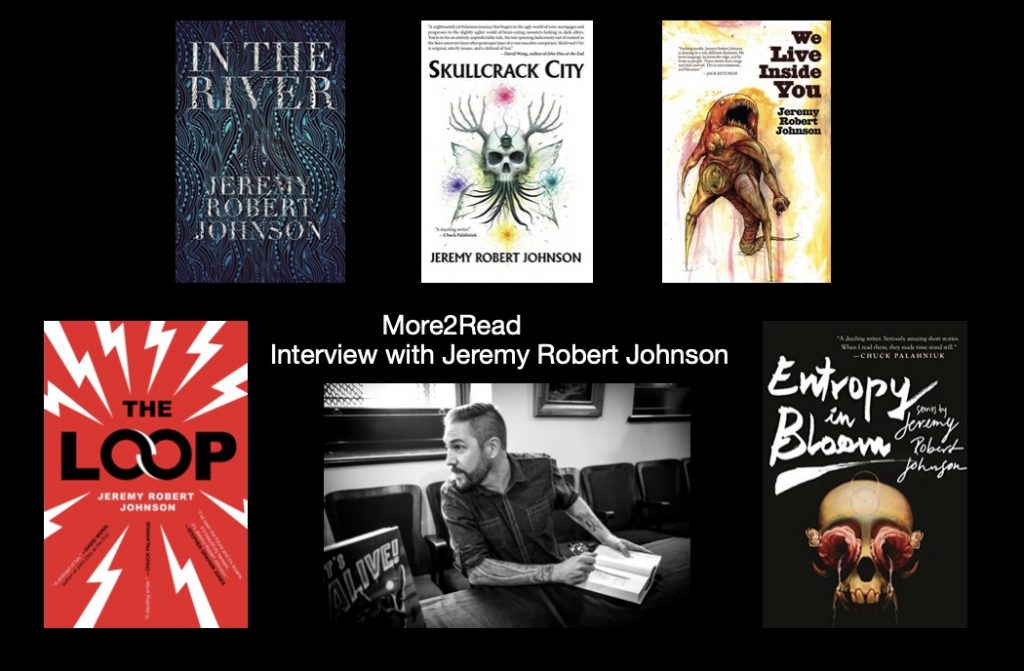 Jeremy Robert Johnson is the author of the The Loop, released in September 2020, a novella In The River, and critically-acclaimed collection ENTROPY IN BLOOM, as well as the breakthrough cult novel SKULLCRACK CITY. His fiction has been praised by The Washington Post and Publishers Weekly, authors such as David Wong, Chuck Palahniuk, and Jack Ketchum, and has appeared internationally in numerous anthologies and magazines. In 2008 he worked with The Mars Volta to tell the story behind their Grammy Winning album The Bedlam in Goliath. In 2010 he spoke about weirdness and metaphor as a survival tool at the Fractal 10 conference in Medellin, Colombia. In 2017 his short story “When Susurrus Stirs” was adapted for film and won numerous awards including the Final Frame Grand Prize and Best Short Film at the H.P. Lovecraft Film Festival. He is repped by Mollie Glick (Literary) and Jon Cassir (Book-to-Film) at CAA, and is at work on a host of new books.

Jeremy is intermittently social over at Facebook, Instagram, and Twitter if you’re into that. He does not have a newsletter even though everyone keeps saying, “Man, you gotta get a newsletter. That social media stuff is dying fast.”

Welcome and congratulations on your new work The Loop, published September 29th 2020. Tell more about the seed and inspiration, and the metamorphosis of the seed into this final baby.

The Loop had a long, strange genesis. Originally my agent had pitched me the idea of writing a YA Horror novel and I was thinking of something that merged The Outsiders with Invasion of the Body Snatchers. I studied up on YA, and steeled myself for reigning in my crazier impulses, and was excited for the challenge of creating a novel in this new form. Then, very unexpectedly, my novel Skullcrack City defied all of our expectations and became a crowd-pleasing bestseller. And once that recognition reached the New York circuit some very serious editors started reaching out expressing their interest in something like what I’d just written. My weird stuff had accidentally become commercially viable. At that point the new drive was to write another completely insane novel, YA or not. So I took the kernel of an idea I had for that YA novel and said, “How would I tell this story if there were no constraints?” and I started work on The Loop.

But then! I’d effectively juiced my brain writing two deeply personal novellas (“The Sleep of Judges” and “In the River”) and I found myself in the horse latitudes of a very strong writer’s block. My wife, who is wise beyond my ability to understand, thought that I might find inspiration if I used a sensory deprivation tank. She bought me a gift certificate to a place called Float On, and by that weekend I was in the tank. While in the tank, I meditated on the idea of the novel with the hope that some kind of key would be provided to unlock the rest of the work. About 45 minutes in my consciousness rose above my body, floating among these beautiful, swirling green stars. And then those stars coalesced and formed a single word:

That was my answer. I asked myself who Lucia was and Lucia/Lucy from The Loop rose in my mind and I knew I had to tell her story.

Then I wrote the thing. (That’s the least interesting “me sitting and typing” part of the story.)

How long from idea through to first draft and final draft did this work take?

What were you trying to communicate within the reader with this tale?

Writer and teacher Kris Saknussemm once told me, with regards to ones writing, “Never excuse and never explain.” I think that’s very wise advice. The writing is what it is, and each individual’s subjective experience of the work is what they take away from it, regardless of what I’ve tried to communicate.

But if I was successful then readers might get all the cheap thrills of an 80’s horror/sci-fi paperback rack, or they might read an angry polemic about class and othering and commodification of humanity under capitalism (or if I really pulled this thing off, maybe both). 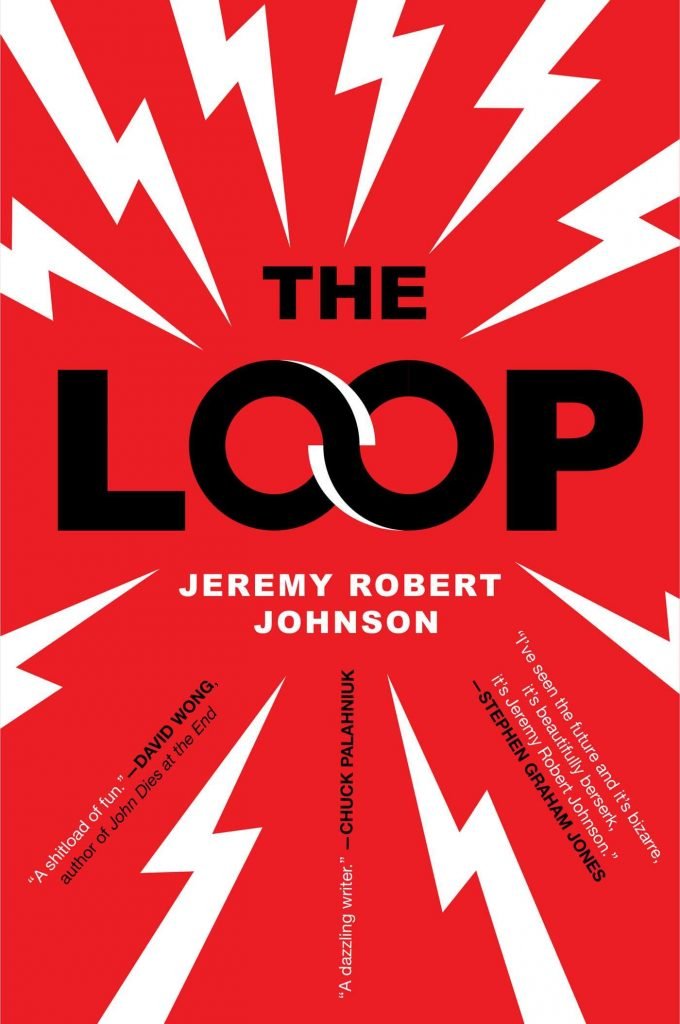 Your work In the River from 2017 was a great story under 150 pages and a poignant little ballad. Tell me more about the seed and inspiration behind it.

Second, that book is very much about the deep and terrifying love and attachment of being a parent, and comes both from my own experiences as a father, and from something horrifying my wife woke and told me in the middle of the night, and from the story of a South American shark attack that I remember reading about as a child but of which I can no longer find any record.

Of anything I’ve written I think In the River might be the story that outlives me. It’s my most universal and emotionally relatable book, and the one time I really felt like I was channeling something. It was a really raw and draining experience to write it, but I’m glad it exists.

Writing: when, where, and with what, do you do it?

When: Whenever I can. I used to have a schedule, but the chaos of 2020 has blown that all to hell.

Where: The Garoffice, aka my temporary pandemic office in our drafty, currently wildfire-smoke-filled garage.

With what: A Toshiba Satellite laptop and remote Logitech keyboard and my clumsy, never-learned-the-home-keys fingers.

Pantser for short stories. Outliner for novels. (I never stick to the outlines, but they give me the courage to start.)

What key advice would you give to the aspiring novelist and short story author?

First, the old chestnuts: Read widely (even and especially outside your most beloved genres). Write often.

Second: Don’t get into this to make money. Most folks don’t, and even moderate successes won’t get you near the stability, insurance, and income of the average corporate drone. The money and fame are anomalous in this industry. Do this because you don’t know how to stop. Because you love it. Because you have to.

Third: Write your truth. Write those intimate things that make you sweat and worry. That’s the stuff that resonates and connects.

Fourth: If you are thinking in terms of commerce, novels sell better than shorts. (Yes, there are rare exceptions like Saunders/Hempel/Link who are primarily known for shorts, but they are rare [and Saunders and Link made more from their novels].)

Fifth: Read the magazines you submit shorts to, and the books from editors and agents you wish to work with. Know your market and you’ll spend less time and effort frustrating yourself and others.

Sixth: Actual writing is more important than any writing scene/writing teacher/writing workshop. Keep creating and working and don’t get caught up in the peripherals.

Seven: Don’t listen to me. I’m a mid-lister who writes insane books. Rather, search out advice from people who have achieved the tangible successes you desire for yourself.

Jack Ketchum, a great writer and teacher passed, once said this in praise: “Jeremy Robert Johnson is dancing to a way different drummer. He loves language, he loves the edge, and he loves us people. This is entertainment…and literature.”

Tell me what it felt like and what a writer like Jack meant to you and what he brought to writing and teaching.

This is like the part in those old Barbara Walters interviews where she’d try to get the guest to cry, right?

I mean, that meant the world to me, that Dallas had even read my stuff, let alone said something so deeply kind. The day he sent that blurb my way I remember reading it, printing the email and tacking it to the wall, and then just kind of floating. Probably had some drinks. I just…you shouldn’t need that kind of validation from your predecessors, you know, you should believe in your own work implicitly, but the truth is I’m not ironclad in believing in myself, and for a writer I hold in that stature, for the guy who wrote Off Season and The Girl Next Door and “The Rifle,” to say that…it meant so much.

As far as his teaching, his work alone was a masterclass in turning human darkness into something that could be both propulsive and deeply felt. He had that Hubert Selby Jr. kind of thing, where you felt like he cared about even the worst of his characters. That empathy ran deep. He wanted us, himself, everyone, to be better than we are. And he was unflinching in expressing that.

Privately he also advised me about my worst writing habits on a very technical/editorial level. A lot of the character-based stuff that I finally/hopefully got right in The Loop is because I had Dallas’ advice in mind.

Dallas William Mayr (November 10, 1946 – January 24, 2018), better known by his pen name Jack Ketchum, was an American horror fiction author. He was the recipient of four Bram Stoker Awards and three further nominations. His novels included Off Season, Offspring, and Red, which were adapted to film. In 2011, Ketchum received the World Horror Convention Grand Master Award for outstanding contribution to the horror genre.[1][2] 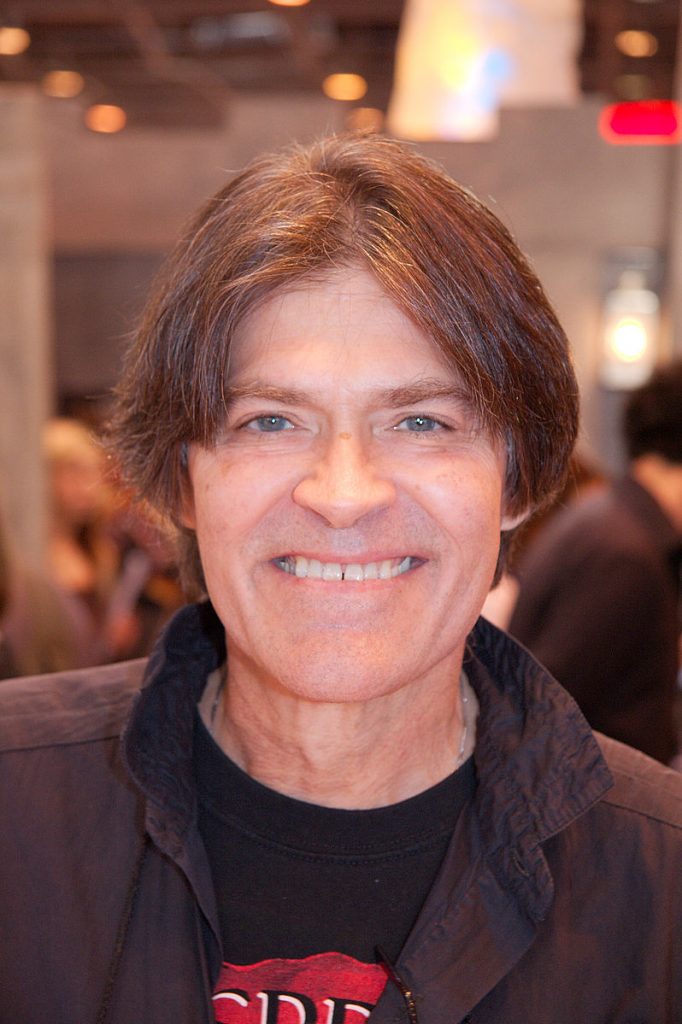 On social media you listed four transgressive novels as your favorite.

What did they communicate to you and which aspects did you love? 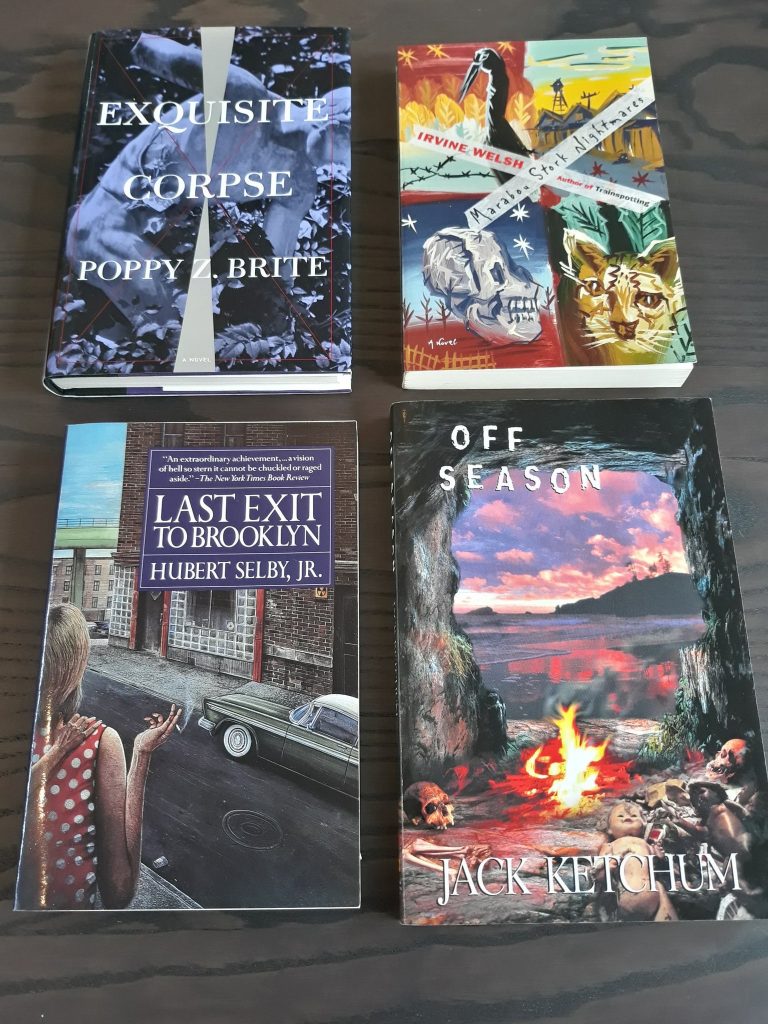 Exquisite Corpse showed me how satire and absurdity and nastiness and eroticism and unflinching violence could merge into a dangerous, potent, beautiful thing. I love/hate the last forty pages of that book. I remember turning back the pages to try to make the ending change, to free myself from that spider’s web.

Marabou Stork Nightmares showed me how intimate and formally experimental a work could be, and how heartbreaking and nightmarish and thrilling it could be to live inside the mind of such a flawed, damaged person.

Last Exit to Brooklyn is an all-timer when it comes to directly forcing you to experience the pain of others. It is an inescapable howl of agony, and all of that pain lands because Selby gave a fuck about the people who live inside of those experiences. It is the precise opposite of exploitation, a wildly dark (and sometimes darkly humorous) expression of love for humanity in all its inherent suffering.

Off Season was magic to me. I’m not sure I even blinked the first time I read it. Its reputation for nastiness preceded it, but I was more impressed by how lean and driving the prose was, and how long the story was built inside the character’s psychological worlds before the cannibalistic outside world intruded. Add in the narrative twists and a passage inside the overwhelmed house that reads like a beautiful fever dream and I was completely fascinated.

Who are your memorable characters from fiction, and why?

I’ve been riding this train of glorious horror releases that 2020 has offered up and the last two to knock me sideways were Survivor Song by Paul Tremblay and The Only Good Indians by Stephen Graham Jones. Prior to that I really loved Kelly Link’s Get in Trouble and Andy Davidson’s The Boatman’s Daughter.

Dystopian and sci-fi movies: which ones are your favourites?

Top 10, in a mix of those categories today and at this moment, would be: 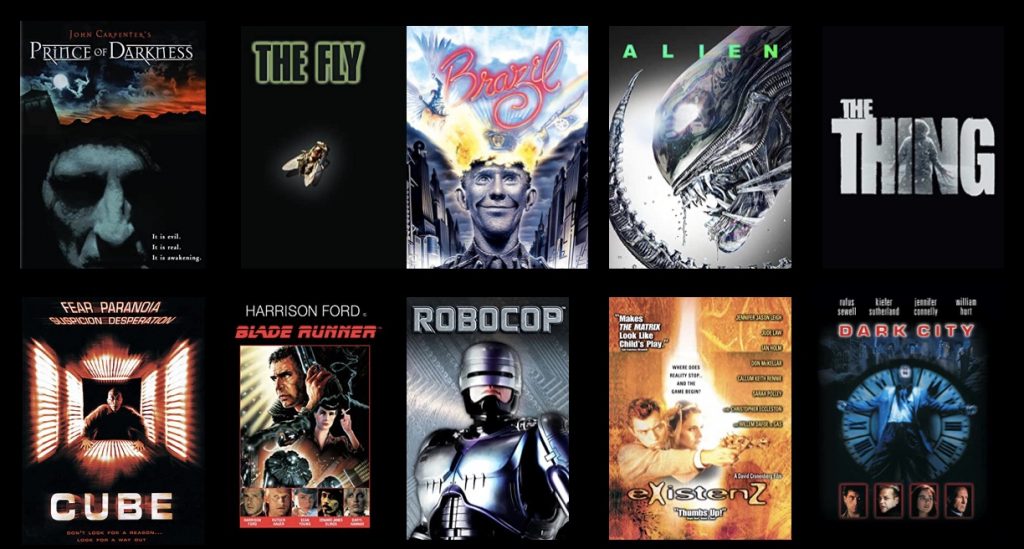 Thank you for this chat on writing and all the best with your release.

Thanks for having me!

Reviewed by Lou Pendergrast on 01 October 2020