Book Review: Your House Will Pay by Steph Cha - More2Read

Your House Will Pay by Steph Cha 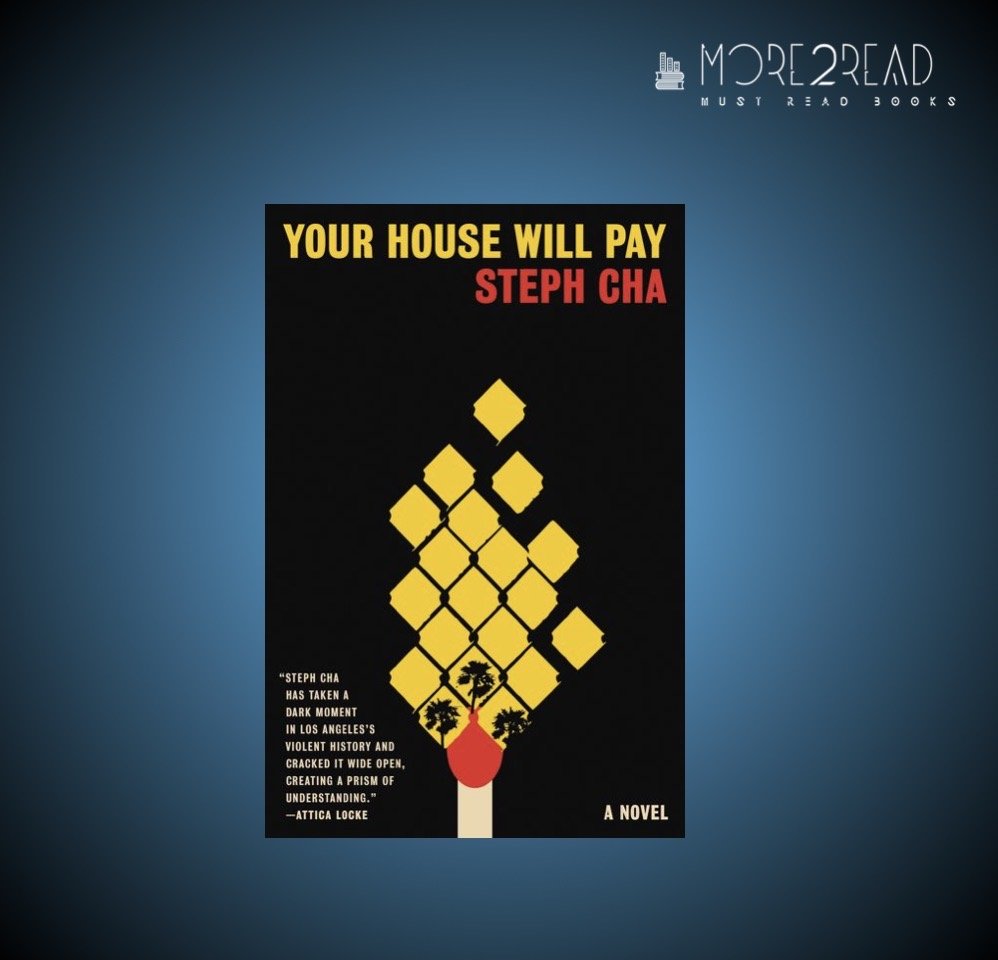 A powerful and taut novel about racial tensions in Los Angeles, following two families—one Korean-American, one African-American—grappling with the effects of a decades-old crime
In the wake of the police shooting of a black teenager, Los Angeles is as tense as it’s been since the unrest of the early 1990s. But Grace Park and Shawn Matthews have their own problems. Grace is sheltered and largely oblivious, living in the Valley with her Korean-immigrant parents, working long hours at the family pharmacy. She’s distraught that her sister hasn’t spoken to their mother in two years, for reasons beyond Grace’s understanding. Shawn has already had enough of politics and protest after an act of violence shattered his family years ago. He just wants to be left alone to enjoy his quiet life in Palmdale.
But when another shocking crime hits LA, both the Park and Matthews families are forced to face down their history while navigating the tumult of a city on the brink of more violence.

Praise For Your House Will Pay:

“Cha does a masterful job imbuing each character with nuance and care.”
—Buzzfeed

“As the action moves through SoCal’s diverse and divided communities, grief, rage, repentance, duty to family and more force readers to consider all sides of complex moral issues. Add the journalistic and police-procedural elements, not to mention capturing the chaos of the 1992 Rodney King riots, and it’s clear this is a high-stakes novel.”
—L.A. Times

“Cha…offer[s] an incisive and searing look at race relations, violence, and the intersection of disparate traumas. It’s a riveting, revelatory novel—a must-read.”
—Nylon

“A riveting thriller about two families’ heartbreaking struggles to confront and transcend rage and loss.”
—Kirkus

“Your House Will Pay is a propulsive and well-plotted novel set in Los Angeles where crime and tension are at an all-time high. In Cha’s narrative that explores race, class, and community in Los Angeles, her characters must confront their histories and truth.”
—The Millions

“Your House Will Pay never downplays the impacts of racism and trauma, but Cha’s nuanced portrait of the two families in crisis sparks hope for the possibility of connection and mutual understanding, if not forgiveness.
—Maris Kreizman for Pacific Standard

“Steph Cha’s Your House Will Pay has got it all. This suspense-filled page-turner about murder, repentance, and forgiveness draws from the fraught history of Los Angeles, where America’s immigrant dream bleeds into America’s racist nightmare. The novel would have been relevant thirty years ago. It will likely be relevant thirty years in the future.”
—Viet Thanh Nguyen

“A marvel. Cha finds new angles on a city that has been the focus of myriad stories and films. But this one is unique and totally gripping.”
—Michael Connelly

“A gripping and deftly plotted story of two families, and two communities, set in the aftermath of a police shooting in Los Angeles. Steph Cha’s Your House Will Pay is a sensitive portrait of racial tension, buried memory, and the difficulty of reconciliation.”
—Laila Lalami

“In Your House Will Pay, Steph Cha fearlessly explores the duality of LA’s promise and betrayal, its vision of new beginnings and the brutal divisions that cut between race and class. Cha takes her place as one of the city’s most eloquent storytellers in this soul-searching illumination of one of the tragedies at the heart of the 1992 LA riots.”
—Walter Mosley

“With Your House Will Pay, Steph Cha has taken a dark moment in Los Angeles’s violent history and cracked it wide open, creating a prism of understanding—of the pull of generational violence and its enduring devastation, but also of the power of human grace against all odds. It’s a touching portrait of two families bound together by a split-second decision that tore a hole through an entire city.”
—Attica Locke

“A haunting portrait of two lives—and a city—in turmoil, Your House Will Pay is both a crackling page-turner and a deeply felt work of eloquence, clarity, and devastating insight. With this riveting standalone, Steph Cha firmly establishes herself as not just one of crime fiction’s most exciting young voices, but one of its most exciting voices—period.”
—Elizabeth Little

“A propulsive, lacerating novel about two families caught in the turmoil of a city and nation in crisis, and the tensions that drive history and fate, pit freedom against love, and lace our own best impulses to our worst. Fearless, insightful, and alight with a brutal compassion, Your House Will Pay is a devastating exploration of grief, shame, and deeply buried truths, and the hope that endures when all else seems lost.”
—Catherine Chung

“A thrilling and nuanced look at race relations in Los Angeles that depicts family life, grief and inheritance with such humanity and complexity. A wonderful thoughtful and exciting [novel] that will stay with you.”
—Nikesh Shukla

“Your House Will Pay is the goods. Sharply written, tragically and movingly relevant.”
–Rob Hart

“A real-life racial incident is transfigured into a riveting thriller about two families’ heartbreaking struggles to confront and transcend rage and loss…Cha [blends] a shrewd knowledge of cutting-edge media and its disruptive impact with a warm, astute sensitivity toward characters of diverse cultures weighed down by converging traumas. Cha’s storytelling shows how fiction can delicately extract deeper revelations from daily headlines.”
–Kirkus (Starred Review)

In 1992 L.A at the time of rioting tragedies hit the streets hard, and one family in this tale harder.

The corruption spreading and the divide, the two sides of the fence of the divided denizens of LA strung through the narrative.
Two families need fixing with all the regret and pain travailed.

This crucible of good and evil in this L.A before you with a history of violence with innocence and guilt reoccurring strung together words with storytelling skill has carefully laid down truths in the framework of fiction.
With the whole whirlwind coming to an end you may shed a tear in its final stages of metamorphosis in the compelling narrative with murder and racial tension, past and ongoing, from a tragedy in the 1992 LA riots to present day, has complexities of the human condition to ruminate within the reader.

Your house will pay, but ultimately a price no one wants to pay, who will pay and suffer by the end of this compelling tale.

“It wasn’t like she didn’t care. She understood that there was a lot of tragedy in the world, and it bothered her, for sure, that people were racist and horrible, and that black people kept dying.”

“There was a good chance the job wouldn’t stick. Shawn knew it; Nisha knew it; Ray knew it. Sure, a fresh parolee could only be so picky. But there were other options, ones that paid better and didn’t involve trucking across the county with other people’s belongings. Most of these happened to be illegal.
Ray hadn’t had a legit job since high school. Shawn hadn’t either, until Manny decided to give him a shot. They’d spent all their time with the Baring Cross crew, messing around, getting in trouble, moving dope and running capers when they needed money. It made it hard to find work even when they wanted to go straight. The last time, Ray got so demoralized he held up a bank with a toy gun he’d bought for Darryl. He got caught three hours later, still carrying his $7,000 take in cash, stashed in a duffel bag with the fake gun. That was armed robbery. One dumb-ass federal crime that bought him a twelve-year prison sentence, reduced to ten for good time. Now here he was.”

“It’s inspiring to see young people engaged in this stuff,” said Searcey. “There’s a straight line between your aunt and Alfonso Curiel, and it’s your generation that’ll make sure that one day, kids like them aren’t murdered with impunity.”

“Los Angeles, this was supposed to be it. The end of the frontier, land of sunshine, promised land. Last stop for the immigrant, the refugee, the fugitive, the pioneer. It was Shawn’s home, where his mother and sister had lived and died. But he had left, and so had most of the people he knew. Chased out, priced out, native children living in exile. And he saw the fear and rancor here, in the ones who’d stayed. This city of good feeling, of tolerance and progress and loving thy neighbor, was also a city that shunned and starved and killed its own. No wonder, was it, that it huffed and heaved, ready to blow. Because the city was human, and humans could only take so much.”

Reviewed by Lou Pendergrast on 16 October 2019