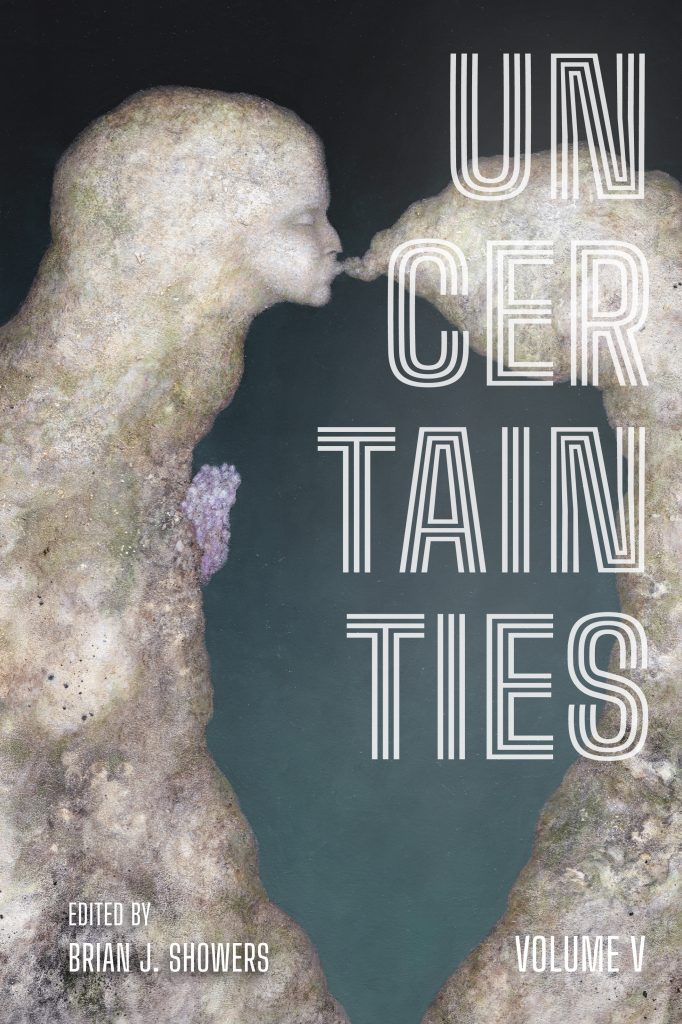 “Surely all this is not without meaning.” – Herman Melville

“Ghost stories,” as Elizabeth Bowen observed, “are not easy to write—least easy now, for they involve more than they did.” But these twelve writers take up the challenge, each in their own way, with expert awareness of the genre’s limitless possibilities.

Uncertainties is an anthology series—featuring authors from Canada, America, the United Kingdom, and the island of Ireland—each exploring the concept of increasingly fragmented senses of reality. These types of short stories were termed “strange tales” by Robert Aickman, called “tales of the unexpected” by Roald Dahl, and known to Shakespeare’s ill-fated Prince Mamillius as “winter’s tales”. But these are no mere ghost stories. These tales of the uncanny grapple with existential epiphanies of the modern day, when otherwise familiar landscapes become sinister and something decidedly less than certain . . .

“Everything We Say and All the Things We Do” – Jason E. Rolfe

“Not Even Legend” – Alan Moore

“So Much Potential” – Simon Strantzas

“Washed in the Blood of the Sun” – John Langan

There is a wonderful little afterword by the editor Brian J. Showers, a small treatise on what scares, words, and storytelling. He quotes from great essays and this little work will have you explore further reading works mentioned and ponder on writings and the psychology of horrors. In the last paragraph introducing the collection he mention this:

“Which brings us to the present volume, the fifth in a series of unsettling tales. Believe it or not, Uncertainties is a themed anthology. The remit was nothing so superficial as vampires or zombies or folk horror or Cthulhu (only in dustbowl Oklahoma this time), but rather to exhibit horror’s myriad nuances, to open up strange vistas of unsettling possibilities and other-worldly ideas, to commune with intrusions from the outside and those disquieting gestations from within. “Ghost stories,” as Elizabeth Bowen observed, “are not easy to write—least easy now, for they involve more than they did.” But these twelve writers take up the challenge, each in their own way, with expert awareness of the genre’s limitless possibilities.
Algernon Blackwood put it well in “The Willows”, a story that’s caused me many sleepless nights in terrible awe of the unknown: “ ‘There are things about us, I’m sure, that make for disorder, disintegration, destruction, our destruction,’ he said once, while the fire blazed between us. ‘We’ve strayed out of a safe line somewhere.’

So you can call these stories whatever you’d like: weird, strange, eerie, uncanny . . . I call them Uncertainties.”

These stories are weird and eerie with uncertain aspects and a joy to read. They do successfully as the editor mentioned:”exhibit horror’s myriad nuances, to open up strange vistas of unsettling possibilities and other-worldly ideas, to commune with intrusions from the outside and those disquieting gestations from within.”

The stories I liked the most where:

The hardback is a work of great craftsmanship with lovely high quality paper that hold well in the hand each page and the binding tight and hard to break, the artwork wrapping it winterly and ghostly. this also came with a beautiful art piece as a bookmark. 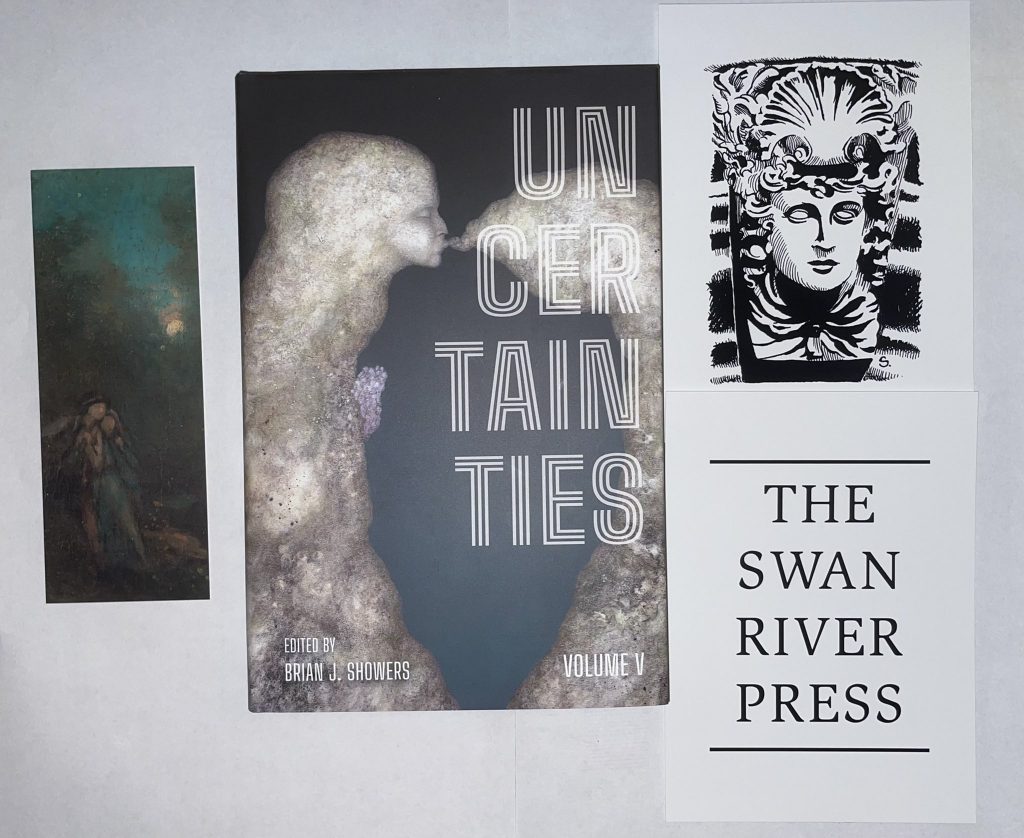 Below is a brief analysis:

Charlie the Labrador is missing and a father with shotgun and son set out from the McAlister farm to find him in the “suppurating sore at the heart of the valley,” the three sisters bog.

Tension building with the eeriness of what fate lays waiting in the woods, three wicked sisters of the woods maybe not so new aspect but you feel the short sense of uncertainty and trepidation with missing dog to be retrieved with a price to pay.

Six year old Trevor playing keeping busy out with mum, dad, and grandad, on a picnic.
Just keep seen will you little boy, stay away from the woods, bushes and don’t talk to strangers.
Trickster of the trees awaits “you coo. you do” voice heard voices uttered in peculiar ways creepy terrifying immersive short.

To See the Sea
Sean Hogan

A New start away from the city with love in suspension, at the sea and maybe some peace amidst the anxieties and complexities, a haunting fate in store with main protagonists search for solitude and freedom.
Mysterious short story that has a memorable lasting affect transported to a sense of alienation and crucible of one life.

A little getaway under different names by the sea in Bangor in February a carnival/funfair interloping the splendour.
The story keeps you reading on in the unfolding mystery of uncertain trouble awaiting written with the right amount of details and immersion.

A disease amongst school of girls ones struck by laughter of another realm, a laughter of a devil. There is a priest in exile, a stranger in a vibrant Tanzanian town by a sea with a girl missing and a sin he has yet to end. The writing is crafted with some great prose style, descriptiveness and atmosphere, a mysterious strange tale that one wants more.

So Much Potential
Simon Strantzas

Hilda out on blind date, bad dates, dates that just won’t give up. One unlike any she encountered before, a threatening figure and terrifying effect on her and away from date as soon as possible Roxanne should have known better setting her up with such a specimen.

Questions arise for Hilda and the reader certain uncertainty wether something be illusion or hallucination compelling you forward in the narrative of creepy uncertainty that date that stalker kind of person Blake Massas who he is what is he will he be round that corner at night sense of anxiety a visceral feeling and having you embedded in the scene that is pulsating with the fear of the main character’s heart at one with yours in edge of your seat way.

Washed in the Blood of the Sun
John Langan

You may have happened to stop at the certain pump station with a teacher working there and you may not have seen that evening what things were to traverse a man running out and then another.
This teacher trying to make ends meet working four days a week, nights at a gas station, with father sick and then there is Ron also with father sick in hospital, both friends.
He relates an incident of 30 years ago and matters of his life then amidst a doctorate by day working by night and tells of his love of Camus and certain classical music and significantly words of Bataille and a French poem have important aspect in this tale.
With time the real story unfolds a state of affairs of re-enacting something, there will be a remedy sought with irreversible actions that have the main character spiral and descend into an otherness chasm of unease and dread.
An immersive haunting tale that induces successfully uncertainty and uneasiness.
“We give you our blood, give us your blood”

Reviewed by Lou Pendergrast on 20 September 2022