The Vessel by Adam Nevill 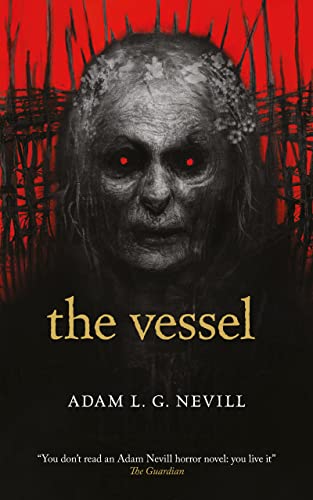 An eerie folk horror novel from the author of Cunning Folk, The Reddening, The Ritual, No One Gets Out Alive and the four times winner of the August Derleth Award for Best Horror Novel.

‘A watcher may remark that after sleeping for so long, the building appears to have been roused.’

Struggling with money, raising a child alone and fleeing a volatile ex, Jess McMachen accepts a job caring for an elderly patient. Flo Gardner – a disturbed shut-in and invalid. But if Jess can hold this job down, she and her daughter, Izzy, can begin a new life.

Flo’s vast home, Nerthus House, may resemble a stately vicarage in an idyllic village, but the labyrinthine interior is a dark, cluttered warren filled with pagan artefacts.

And Nerthus House lives in the shadow of a malevolent secret. A sinister enigma determined to reveal itself to Jess and to drive her to the end of her tether. Not only is she stricken by the malign manipulation of the Vicarage’s bleak past, but mercurial Flo is soon casting a baleful influence over young Izzy. What appeared to be a routine job soon becomes a battle for Jess’s sanity and the control of her child.

It’s as if an ancient ritual was triggered when Jess crossed the threshold of the vicarage. A rite leading her and Izzy to a terrifying critical mass, where all will be lost or saved.

“You don’t read an Adam Nevill horror novel: you live it” The Guardian

‘In refining the tale of supernatural horror to its essence, M.R. James increased the terror, and among his living inheritors is Adam Nevill’ – Ramsey Campbell

The story opens with a haunting description and invitation to a remote dwelling The Vicarage where behind the walls lays a history of which will soon be initiated and unraveling with the occupant an elderly wheelchair bound Flo and her carer in this folk horror.

There will be intrigue instilled within the reader with various mysterious elements of which at the centre resides an elderly women named Flo of 89 years of age, one who had once two children and a husband and now alone, a victim of a stroke three years previous and a dementia sufferer, mysterious happenings to be revealed and discovered amidst the presence of her carer Jess one who is determined to investigate and uncover Flo’s past.

A two sitting read that was a haunting folk horror read that consumes and transports.
With eloquent prose style the author frames the scenes vividly with atmosphere and tension, there be malevolence and the sinister and at the same time empowering and entrancing with a tragedy at Nerthus House, The Vicarage by the Grove, with horrors and decay something needing aligning however sinister it maybe.

“A stillness profound enough to be uncanny hushes a woodland glade. Trees encircle the placid water of a circular pond therein, the surface a black mirror reflecting a sombre sky.
Glimpsed between the columns of trunks and downy birch branches that ring the water, white blossom and vivid flowers erupt along the borders of a distant lawn. Beyond this mown pelt of grass, a weathered vicarage stands sentinel. An outcrop of dour stone with windows as impenetrable as the pond’s untroubled surface.”

“Vicarage, garden, wood and pond grow smaller below the reprieved thrush. It sees the land become a patchwork in which the suggestion of a circular village, with the vicarage forming the hub of an indistinct wheel, assumes shape.
Black clouds cover the world.”

“Proud Nerthus House at dusk.
Across the road, those who watch the vicarage’s transformation see windows beaming golden. Not only has the grin at ground level broadened but the eyes are open and alight upstairs. A watcher may remark that after sleeping for so long, the building appears to have been roused from within.”

“A bird alights from the yew tree beside the group and bursts into the air. The vicarage and the garden grow smaller below its ascent. As the bird flies higher, the earth takes on the shape of a new pattern. An eye. In the centre of a bushy copse of tree tops resembling a rough green iris, the tiny black pond of the grove becomes a pupil staring into the sky. From out of the fringe of greenery that is the grove, the faint lines of ancient green paths form spokes that pass in straight lines from the pond. They reach beyond the boundary of the vicarage and thread between the tiny buildings of Eadric.”

Adam L.G. Nevill was born in Birmingham, England, in 1969 and grew up in England and New Zealand. He is an author of horror fiction. Of his novels, ‘The Ritual’, ‘Last Days’, ‘No One Gets Out Alive’ and ‘The Reddening’ were all winners of The August Derleth Award for Best Horror Novel. He has also published three collections of short stories, with ‘Some Will Not Sleep’ winning the British Fantasy Award for Best Collection, 2017.

Imaginarium adapted ‘The Ritual’ (2016) and ‘No One Gets Out Alive’ (2020) into feature films and several other works are currently in development for the screen.

Adam also offers three free books to readers of horror: ‘Cries from the Crypt’, downloadable from his website, and ‘Before You Sleep’ and ‘Before You Wake’ are available from major online retailers.

The author lives in Devon, England. More information about the author and his books is available at: www.adamlgnevill.com 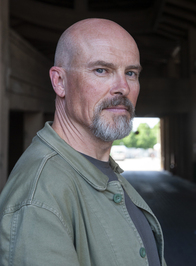 Reviewed by Lou Pendergrast on 01 November 2022