Review: The Third Bank of the River by Chris Feliciano Arnold | More2read

The Third Bank of the River: Power and Survival in the Twenty-First-Century Amazon by Chris Feliciano Arnold 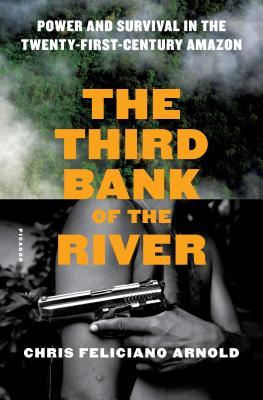 A sweeping look at the war over the Amazon-as activists, locals, and indigenous tribes struggle to save it from the threat of loggers, drug lords, and corrupt cops and politicians

Following doctors and detectives, environmental activists and indigenous tribes, The Third Bank of the River traces the history of the Amazon from the arrival of the first Spanish flotilla to the drones that are now mapping unexplored parts of the forest. Grounded in rigorous firsthand reporting and in-depth research, Chris Feliciano Arnold reveals a portrait of Brazil and the Amazon that is complex, bloody, and often tragic.

During the 2014 world cup, an isolated Amazon tribe emerged from the rain forest on the misty border of Peru and Brazil, escaping massacre at the hands of loggers who wanted their land. A year later, in the jungle capital of Manaus, a bloody weekend of reprisal killings inflame a drug war that has blurred the line between cops and kingpins. Both events reveal the dual struggles of those living in and around the world’s largest river. As indigenous tribes lose their ancestral culture and territory to the lure and threat of the outside world, the question arises of how best to save isolated tribes: Keep them away from the modern world or make contact in an effort to save them from extinction? As Brazil looks to be a world leader in the twenty-first century, this magnificent and vast region is mired in chaos and violence that echoes the atrocities that have haunted the rain forest since Europeans first traveled its waters.

“A journalistic account of the rush to develop the Amazon rainforest and its cost in human lives…[Arnold] draws much-needed attention to crime without punishment in a remote-but not invisible-part of the world.”
– Kirkus Reviews

“Arnold pulls few punches in this sobering account of the unfolding genocidal threat, adding another dark layer to the urgent story environmentalists are already telling about how the logging of rain forests is playing a drastically destructive role in climate change.”
–Booklist

“Arnold handles all of the narrative strands expertly and shows a keen eye for detail…The reader leaves with a newfound understanding of the diversity, complexity, and corruption to be found in the modern Amazon.”
– Publishers Weekly

“A vital passionate chronicle of life and death in the world’s last Wild West.”
– Jon Lee Anderson, author The Lion’s Grave and Guerrillas

“With The Third Bank of the River, Chris Arnold brings us valuable insights into the forces conspiring to devastate the Amazon and the valiant struggle of those seeking to impose the law in a land where the rule of the gun prevails. A real page-turner.”
– Scott Wallace, author of The Unconquered: In Search of the Amazon’s Last Uncontacted Tribes

You just can’t make these things up, the whole terribleness within, the corruption, the crimes, this narrative, truth things that past and still go on upon this earth.

Reporting with plenty of heart and passion with clarity in writing.

He went in deep sometimes crossing the thin line between life and death, he returned to his first home, in search of a world he wants to understand of the cause and effect of certain events, conditions of people and histories.

Terrible fate of humans in this narrative.

There is a search for truth behind one Bloody Weekend of July 17 2015, he meticulously researched through reports, “Hundreds of pages of police reports, eyewitness accounts, and autopsies. Hours of grainy surveillance video, murders captured from a dozen angles. Endless wiretaps and cell phone screen captures, the story of how monsters are born.”

The reader will learn of the plight of people, against webs and layers of entanglement, corruptions and atrocities, in no words wasted writing, all layered out in easy reading style, in this passionate heart guided honest search of Amazonian histories.

“Brazil is in my blood. I was adopted from the southern city of Belo Horizonte as an infant, during the waning years of the military regime. When I returned twenty-five years later, the experience stirred something dormant inside me. I’d been daydreaming about this summer since the announcement that Brazil would host the World Cup, with the Olympics to follow in 2016. I’d never been a huge soccer fan, but this was a chance to experience a turning point in the history of my birth country. I spoke serviceable Portuguese and carried two passports: the Brazilian citizenship of my birth and the U.S. citizenship I scored at age thirteen at the sleepy federal courthouse in Portland, Oregon. From an editor’s perspective, I was a cheap date, pitching fully reported stories for a desktop-reported fee. I’d be lucky to cover my expenses, duck- ing out of my day job to fly to Brazil with a notebook full of ideas and a camera. What I wanted was some kind of quasi-spiritual experience to help me at last understand where I came from.”

“For the last of the Amazon’s isolated Indians, the turn of the twenty-first century was the latest chapter in a saga of hiding. They had escaped to these distant tributaries of the Amazon fleeing centuries of slavery, rape, and massacre by early European invaders and later-day rubber barons. Modern loggers and traffickers have been no less ruthless. Generations of isolated tribes have proven their resilience, teaching their children and grandchildren to evade the white man, to kill or be killed, but poison-tipped arrows are no match for automatic rifles.”

“In recent years, ecotourism had blossomed in the Amazon, at a cost to the forest and the dignity of its tribes. For a reasonable fee, countless guides in Manaus could take visitors out for an overnight glimpse of the rain forest just beyond the city. More sophisticated tour operators coordinated large group trips to remote lodges for a more immersive experience of the forest, its animals, its tribes, and even their psychedelic spiritual rituals. Along the way, those outsiders carried technology, pop culture, drugs, and alcohol to communities only a generation or two removed from ancient customs. Some nefarious gringos pay top dollar to plunge deep into the wilderness, where they can poach jaguars and caiman or satisfy carnal appetites free from the watchful eye of the authorities. Government officials worried that an influx of hundreds of thousands of foreign men during the World Cup would aggravate the insidious, age-old exploitation of women and children on the river. Our visit was a chance to see the government’s vision for a gentler, sustainable ecotourism.”

“I tucked those cautionary tales into the myth of Brazil that blanketed my childhood: a wondrous country, full of perils. There was no doubt I’d hit the lotto by being adopted to the United States where exotic dangers were confined to the R-rated section at the video store. Beyond movies and TV, everything I knew about Latin America I learned from my parents, who had brought me from urban Brazil to rural America in 1981, at the twilight of the military dictatorship, six weeks after I was born.”

“With black curly hair and dark eyes, I stood out next to my freckled, blue-eyed mom, dad, and brother. I was only a few years old when my mom tearfully explained in the simplest terms that I was adopted, holding me tenderly by the shoulders as if to brace me for the revelation. When she got it all out, I assured her that I didn’t mind and asked if it was time for a snack. She must have worried that she’d told me too soon, but my parents never wanted my history to feel like a secret. They preserved my Brazilian last name as my middle name on my U.S. documents to make sure I never forgot where I came from—and to leave a paper trail of my origins. I never did forget, but I never really cared, daydreaming about Brazil only on the occasional snow day, when I would trace the heart-shaped splotch on the globe the way another child might touch a birthmark.”

“In the vacuum of the Amazon, screams can go unheard and sins can go unpunished. The illegal loggers, wildcat miners, and drug traffickers of the twenty-first century are the latest in a ruthless lineage, exploiting the rain forest and its people for profit; yet in the history of the region, the lust for one commodity scarred the human landscape like no other.”

“Organized crime has festered in Brazil’s prisons since the years of the military dictatorship, when everyday smugglers and thugs were imprisoned alongside dissident artists and academics. Between torture sessions at the hands of the guards, the prisoners exchanged lessons. The criminals learned the importance of organization, strategy, and alliances. The guerrillas learned how to harvest the enormous profits to be found in the narcotics and firearms trade. One man’s bank robbery was another man’s expropriation. Destabilizing the military regime served both sides. By the turn of the century, even as Brazil grew into a young democracy, its prisons remained cradles of organized crime, cities within cities where criminal leaders recruited new talent, directed traffic, and ordered murder, torture, and extortion inside and beyond the walls. On the outside, they were enabled by local politicians eager to keep violent crime confined to the penitentiaries and poor neighborhoods—and to grab their share of power, profit, and influence.”

“By spring of 2016, the Ghost Riders were awaiting trial, nine military police and two criminal informants accused of orchestrating nineteen murders and attempted murders, beginning on the Bloody Weekend of July 17, 2015.”

“The sensational drama surrounding Brazil’s leadership pushed investigations into local corruption off the front pages. I spent the hottest part of every day in front of the air-conditioning unit at the Hotel Express in Manaus, sifting through documents about the Bloody Weekend. Hundreds of pages of police reports, eyewitness accounts, and autopsies. Hours of grainy surveillance video, murders captured from a dozen angles. Endless wiretaps and cell phone screen captures, the story of how monsters are born.”