The Reckoning by John Grisham 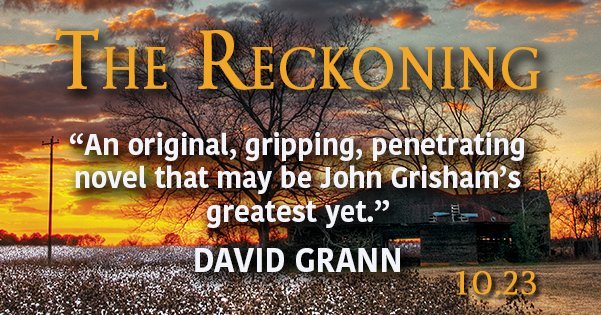 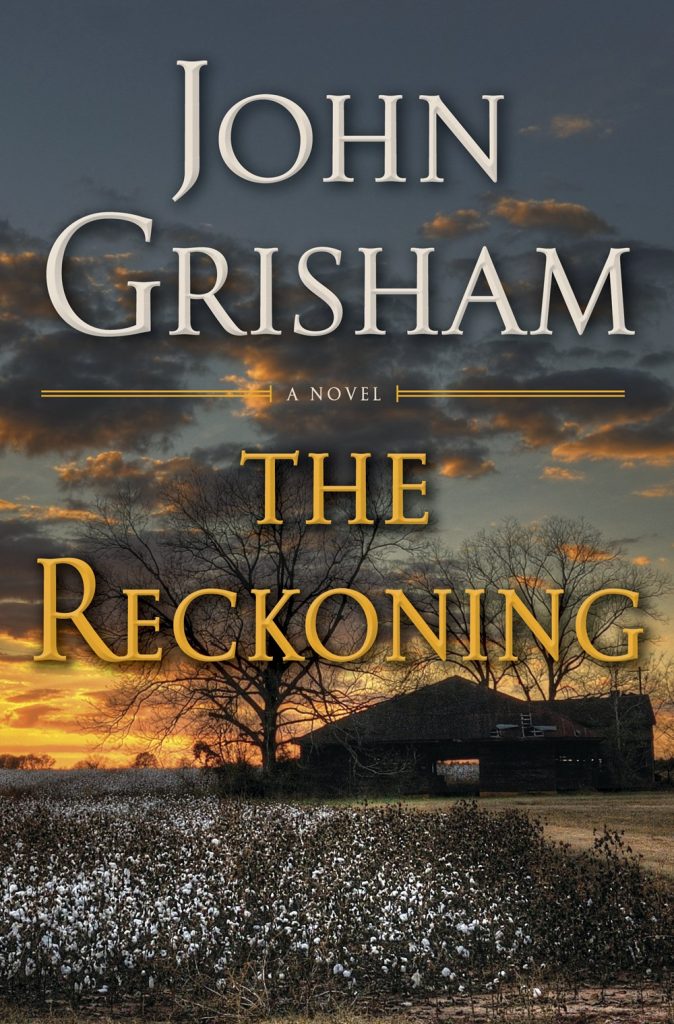 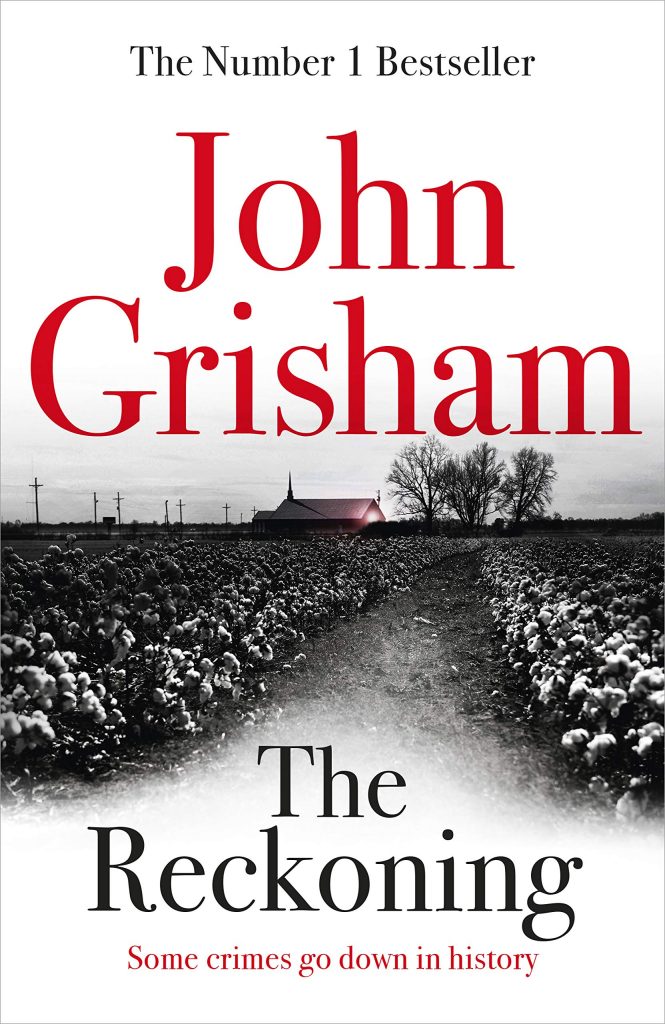 Pete Banning was Clanton, Mississippi’s favorite son—a decorated World War II hero, the patriarch of a prominent family, a farmer, father, neighbor, and a faithful member of the Methodist church. Then one cool October morning he rose early, drove into town, walked into the church, and calmly shot and killed his pastor and friend, the Reverend Dexter Bell. As if the murder weren’t shocking enough, it was even more baffling that Pete’s only statement about it—to the sheriff, to his lawyers, to the judge, to the jury, and to his family—was: “I have nothing to say.” He was not afraid of death and was willing to take his motive to the grave.
In a major novel unlike anything he has written before, John Grisham takes us on an incredible journey, from the Jim Crow South to the jungles of the Philippines during World War II; from an insane asylum filled with secrets to the Clanton courtroom where Pete’s defense attorney tries desperately to save him.
Reminiscent of the finest tradition of Southern Gothic storytelling, The Reckoning would not be complete without Grisham’s signature layers of legal suspense, and he delivers on every page.

Praise for The Reckoning:

“In this saga of love and war, John Grisham has given us a sprawling and engrossing story about a southern family, a global conflict, and the kinds of secrets that can shape all of us. From the courtrooms and jails of rural Mississippi to the war-torn Pacific, Grisham spins a tale that is at once entertaining and illuminating.”
—Jon Meacham, New York Times bestselling author of The Soul of America

“John Grisham is the master of legal fiction, and his latest starts with a literal bang — and then travels backward through the horrors of war to explore what makes a hero, what makes a villain, and how thin the line between the two might be.”
—Jodi Picoult, #1 New York Times bestselling author of A Spark of Light and Small Great Things

“John Grisham is not only the master of suspense but also an acute observer of the human condition. And these remarkable skills converge in The Reckoning—an original, gripping, penetrating novel that may be his greatest work yet.”
—David Grann, New York Times bestselling author of Killers of the Flower Moon

“A book that will break your heart, set your blood pumping and your mind racing, and leave you gasping for breath by the final page.”
— Candice Millard, New York Times bestselling author of The River of Doubt and Destiny of the Republic

Dexter Bell, was popular and highly regarded, Methodist preacher and had been minister of the Clanton Methodist Church for five years.
Wife Jackie

Rural Mississippi 1940’s, white peoples killing their own instead of a black person they just will no do it, or will they?
A narrative that has all the makings of a great tale.
The great trial of one peter banning commence forth, a white war hero murdered in cold blood a black Methodist preacher of a small community in Mississippi.
Really there is no case, he admits doing it, but will not say why, should be open shut case.
These characters and setting revived straight from great author William Faulkner’s works, with racial tension, injustices, and postwar times.
John Grisham couldn’t pick a better subject matter for this times a changing.

The solemn silence, the quickness to admit and not explain motive, the whole mystery enveloping and captivating the reader forward in search of answers.

Grisham is remembering his roots in this southern tale, and the masters like William Faulkner and paying some homage.
Loved to read William Faulkner come to life in this tale, he appears in a restaurant, and Joel, the murderers son, sees him in Town of Oxford Mississippi and again in a restaurant and asks for a signature. Everyone was at the time reading Faulkner. Go Down Moses gets a mention as Pete Banning reads it in a vehicle while being escorted by police. Joel struggled though Absalom, Absalom!, as did many, but a great story I have read more than once. Stella whilst on train was reading short stories of Eudora Welty, a great southern writer and highly recommended reading. Intruder in the Dust by William Faulkner had just been published in the timeline of this narrative. The Mansion, a restaurant, Joel is carrying Intruder in the Dust and his father’s As I Lay Dying, notices Faulkner seated eating, keen to have his books autographed.

Captivating, poignant and immersive reading.
A tale of three stories, love, war and murder, there will be tragedy in 1940’s rural small town Mississippi.

“What he want?” “He’s coming to arrest me, Nineva. For murder. I just shot and killed Dexter Bell, the Methodist preacher.”

“A popular preacher murdered in cold blood by the town’s favorite son, a legendary war hero. There had to be a damned good reason for it, and it was only a matter of time before the truth spilled out.”

“On a cold morning in early October of 1946, Pete Banning awoke before sunrise and had no thoughts of going back to sleep. For a long time he lay in the center of his bed, stared at the dark ceiling, and asked himself for the thousandth time if he had the courage. Finally, as the first trace of dawn peeked through a window, he accepted the solemn reality that it was time for the killing. The need for it had become so overwhelming that he could not continue with his daily routines. He could not remain the man he was until the deed was done. Its planning was simple, yet difficult to imagine. Its aftershocks would rattle on for decades and change the lives of those he loved and many of those he didn’t. Its notoriety would create a legend, though he certainly wanted no fame. Indeed, as was his nature, he wished to avoid the attention, but that would not be possible. He had no choice. The truth had slowly been revealed, and once he had the full grasp of it, the killing became as inevitable as the sunrise.”

“Ford County had not seen a white murder in over ten years. In 1936, a couple of sharecroppers went to war over a strip of worthless farmland. The one with the better aim prevailed, claimed self-defense at trial, and walked home. Two years later, a black boy was lynched near the settlement of Box Hill, where he allegedly said something fresh to a white woman. In 1938, though, lynching was not considered murder or a crime of any sort anywhere in the South, especially Mississippi. However, a wrong word to a white woman could be punishable by death.”

Reviewed by Lou Pendergrast on 21 October 2018