The Half-Freaks by Nicole Cushing 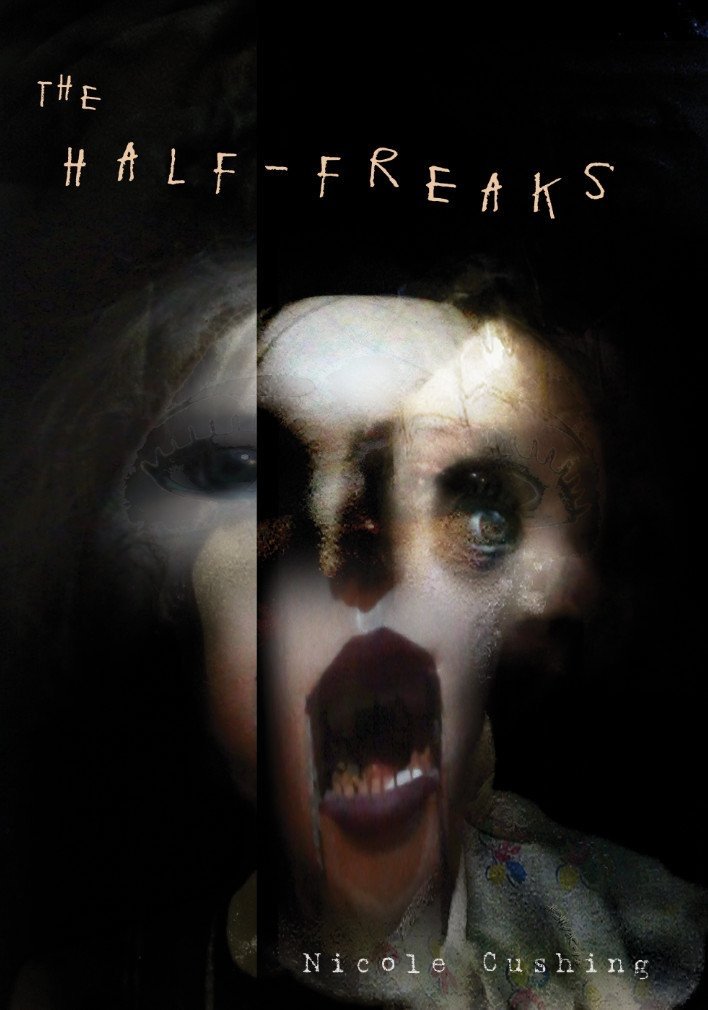 Harry Meyers is ill-equipped to handle funeral planning of any sort. If he had a goldfish and that goldfish died, he would probably find a way to bungle the flushing. But when Harry’s mother passes away without having made any arrangements, and he’s the only surviving next of kin, Harry is called on to navigate a grimly hilarious, half-real world of morgues, morticians, fetishes, and cosmic disaster. Transgressive and bleakly funny, terrifying but surprisingly humane, The Half-Freaks showcases Nicole Cushing’s ever-evolving take on the Weird.

Trade Paperback can be purchased at publisher site: https://vastarien-journal.com

A fabrication of Harry before you.
Immortalized with stark complexities of one unique Harry.

The obscurity and decadent waking and walkings of Harry await, his realm of self-loathing may get under your skin but at the same time you want to see out his fate.
Seeing out this tale and the fictitious Harry is due to the successful skill of the storyteller in lucid form with psychological insight into the construct of Harry, this form of horror writing at times being a channel to stir you up, and a possible task at hand here, whilst spinning the tale forward into the weird fun ride chasm that is Harry.
Delightful skeptic Harry, you fetid soul your are off your rocker!

There will be no fan fiction to follow or children of Harry.
See you at the Town Supermarket Harry, your an absurdity, an imposter, interloper in this realm of existence, and next time I see you, open your mouth and call me half-freak to my face!

Enter at your peril this divine dark comedy of Nicole Cushing conjuring.
Next up, I will watch the 1980 Ken Russell movie Altered States, mentioned in here.

“Broken”-is that the best word to use?
No.
Maybe clammy sums it up better. You know, sweaty. Wobbly. Sick. That’s how Harry’s brain feels most of the time. Like it’s tilted at a thirteen-degree angle. Like it’s slathered in snot. No, not snot-mold.”

“We tell ourselves that our favorite writer will be remembered forever, when in fact every writer who leaves the stage is eventually lost in the deluge of new writers looking to take their place. We dare not even consider the fact that language, as we know it, is on borrowed time. That one day, a mere two thousand years from now, no one will be able to understand Hamlet’s famous soliloquy, let alone the beautiful bleakness of Ligotti. And at that point, in less than the blink of a cosmic eye, it will be as though the Bard and the Grimscribe had never been born.”

“Harry remembers the ‘80s film Altered States, starring William Hurt as a scientist whose experiments with a sensory deprivation tank and hallucinogenic drugs make him physically devolve into a prehistoric ape-man.
Well, to be honest, Harry doesn’t remember the film in its entirety. You see, he’s never seen it in its entirety. For that matter, he didn’t even see it in the theater. (Mother didn’t approve of theaters.) Nor did he catch it on VHS. (Mother thought renting movies was a waste of money when there were so many programs available for free on television.)”

“I feel compelled to start off this chapter with an observation: libraries are not the same as they were when I was a child. Back then, there was an expectation that everyone entering those sacred halls would remain courteously silent for the length of their visit. If conversation was absolutely essential, then it was to be conducted in whispers. If, for whatever reason, a conversation was conducted at a volume louder than a whisper, the librarian would place her finger up to her lips and loudly go “Shhh!”
This etiquette was quite necessary, as the library was a place where people assembled to focus quietly on the written word. You came to the library for only three reasons: to read, to find something to read, or to research. If you came to do the latter, you needed a pencil, paper, the card catalog, and a few dollars in quarters to use the photocopy machine.”

Nicole Cushing is the Bram Stoker Award® winning author of Mr. Suicide and a two-time nominee for the Shirley Jackson Award. Various reviewers have described her work as “brutal”, “cerebral”, “transgressive”, “taboo”, “groundbreaking” and “mind-bending”. This Is Horror has said that she is “quickly becoming a household name for horror fans”. She has also garnered praise from Jack Ketchum, Rue Morgue Magazine, Thomas Ligotti, and Poppy Z. Brite. Visit her online at nicolecushing.wordpress.com.

Reviewed by Lou Pendergrast on 15 November 2019