Book Review: Everything Is Beautiful and Nothing Bad Can Ever Happen Here by Michael Wehunt - More2Read 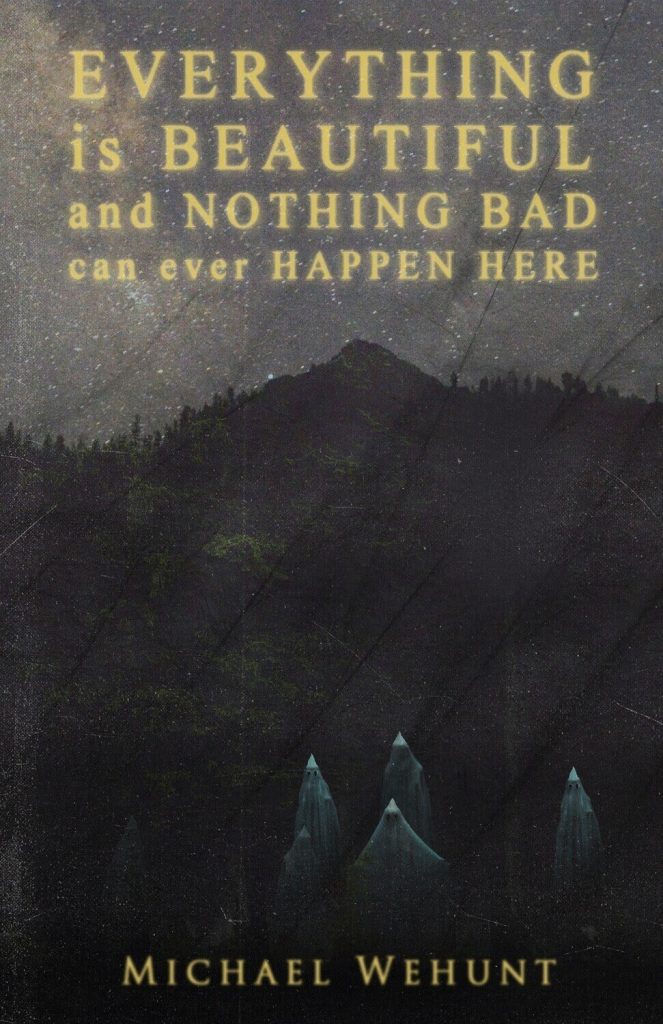 Now shipping!
Fully color illustrated by Luke Spooner
Signed, numbered, and limited to 250 copies
$10 from each sale of this chapbook will go to the Southern Poverty Law Center (Once sold out, a total of $2,500 will be donated to this charity!)

Bea Holcombe loves her life in Fontaine Falls, a perfect little town tucked away in the Blue Ridge Mountains in North Carolina. She has never thought to question that love until her next-door neighbor opens fire on a crowd of black demonstrators gathered in the city park to protest the town’s Confederate statue. Lester Neal has torn open an invisible wound in Fontaine Falls, and what festers inside of it will change Bea, her family, and the dimming mind of her mother forever.

As the national media descends and violence spreads, the town endures a conflict it is no longer insulated from. Bea is given a special sight so that she may witness how deep the rot has burrowed inside the postcard charm of Fontaine Falls. And she will be asked to turn the light of scrutiny and complicity upon herself as she is visited by horrors that won’t rest quietly. “This is a ghost story,” she tells us repeatedly. This unflinching, poetic novella is an examination of that claim—its layers of truth, of untruth, and the uneasy specters that inhabit modern America.

One resident of Fontaine Falls, North Carolina, in a perplexing window of living with new knowledge of neighbor bringing insight and deep reflection on humanity and tragedy with this somber ghost story on things people hide with hate involved.

That old fierce hate and rage shows itself in the narrative of one short lucid nightmare with letters, nouns, verbs, and characters, death is calling and one small heroism.

Publisher and author giving thanks to denizens of this earth paying forward with kindness and charity making a difference with this chapbook.

“That afternoon at twenty past one a masked man had gone to a park not three miles from where my children slept and started firing a gun, seeming to pick his targets out based on the color of their skin and their proximity to the Vance monument, where a small protest had been underway.”

“I stood at my spyhole and tried to think about living next door to such hate for more than two years, hate that mowed its lawn every week and waved from its car as it passed. I imagined the mess of mental issues and grievances that would swirl together in a certain way to coalesce in something of this magnitude. Wouldn’t an evil like that burn brightly enough for those of us around it to notice while there was still time?”

“We both wanted to pretend this was all happening in someone else’s town, but Fontaine Falls was too small for that.”

Reviewed by Lou Pendergrast on 03 December 2019