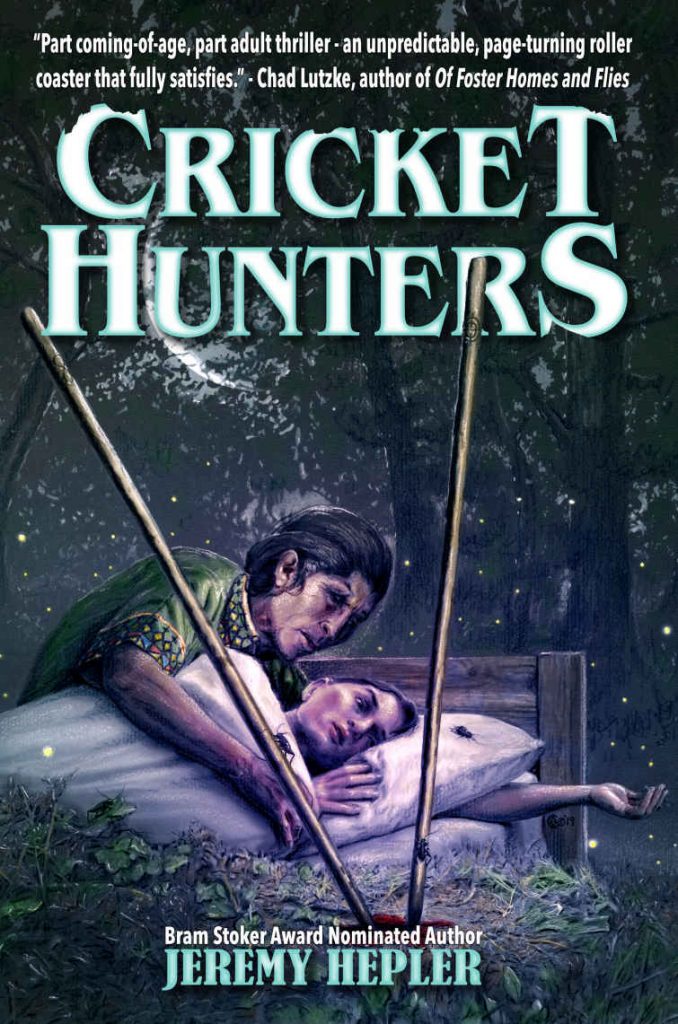 Celia (Garcia) Lundy was fifteen in the fall of 1998 when Abby Powell, one of her five friends who called themselves the Cricket Hunters, disappeared without a trace. Cops scoured the central Texas town of Oak Mott searching for Abby. Interviewed everyone. Brought in the Texas Rangers to assist. Three key suspects emerged and were focused on, but no evidence was found. Eventually, the case went cold, and the passage of time buried the truth of Abby Powell’s fate.

Fifteen years later, as the anniversary of Abby’s disappearance approaches, Cel’s life is upended when her husband Parker, also once a Cricket Hunter, goes missing. When bizarre clues surface that point to a link between Parker’s and Abby’s disappearances, Cel is forced to delve back into the past in order to navigate the present. With the help of her abuela, a self-proclaimed bruja, she embarks on a tumultuous journey fraught with confrontation and trickery, spells and spirits, theft and murder, in order to find out what happened to her husband, and why.

The Cricket Hunters, a crew of young once, they started off five, did everything together, righting wrongs, or at least tried to one could say, then they aged, married, and then they were less, and not a band of young hunters, this is their story along with all of being young to adulthood with love, spells, marriage, death, betrayal, disappearances and missing.

It was good to have the author Jack Ketchum remembered and mentioned in this book with his book Red and Ray Bradbury’s Illustrated Man has a few parts in scenes of this tale which was good too. Its great when books have real books featured in them.

Never expected at first, with that weird title, to have myself hooked, but the crafting of the tale, the mystery with the complex characters had me spiralling along to the end of the whole supernatural drama unfolding, and I just love a coming-of-age tale of the supernatural strain.
I learnt new Spanish words too, one being abuela, Spanish for grandmother.

“To him, reading was therapy. When he read, he didn’t fret or worry, overthink or rethink, assume or regret. When he opened a book, all of his daily problems vanished for a while. He relaxed. He healed. He forgot himself. Over the years he’d spent hundreds of hours reading out here under the canopy of Hunter’s Haven, jumping from world to world, journeying with friends and fighting foes. He muted his cell phone, opened the book, and began reading.”

“He pored over the words, through the sentences. He followed Avery Ludlow on his quest for justice after three heartless teens had shot his best friend, his dog, Red, for no reason other than malice. Parker had read the book three or four times, but Ketchum was one of his favorite wordsmiths, a master at pulling him in, and each time felt like the first.”

“Mesquite Creek split Hunter’s Haven into two nearly-equal halves. He couldn’t go on any farther. He sat down on the same rock he’d sat on a hundred times as a kid—“ Table Rock,” the Cricket Hunters had called it—looped his arms around his knees, and watched the woods on the opposite side of the creek, his mind struggling to rationalize the situation.
What the hell was going on? He didn’t believe in ghosts. Auras and spiritual energy, okay, but not human-shaped apparitions haunting forests. There had to be a logical explanation. She was real, right? If she wasn’t, was he hallucinating? Was his mind slipping?”

“All five had been friends for as long as they could remember. They’d played t-ball together, eaten cheap popsicles on Table Rock in Hunter’s Haven together, ridden their bikes to the municipal pool every summer together, trick-or-treated the streets of their middle-class neighborhood together, worked on their homework together, lied to their parents together, fought off bullies together, stolen together, danced together, but they’d never discussed or used a collective name. Others had. Natalie’s dad had occasionally referred to them as the Gateway Gang. Omar’s mom, the Rotten Bunch. But they’d never embraced a name themselves. That night, punctuated with guttural howls and blood purified sticks, they embraced one without discussion.
The Cricket Hunters.”

“Sans Cel, the hunters walked out of the hospital to a colorful sunset. Various shades of red and pink and gold and blue colored the cotton ball clouds hovering above the day’s last edge of sun. The onslaught of hues and their otherworldly smearing brought to mind a description Parker had read in The Illustrated Man earlier in the waiting room. Something about a sky of diamonds and sapphires and emeralds and streaking comets. That summer, his sister Jennifer had given him her worn copy with a bald tattooed man on the cover, and he’d quickly discovered that Bradbury was a painter with words, his descriptions often conveying more in one sentence than most authors did in an entire chapter. As Parker followed the others around the north end of the two-story brick building, he felt as though he were looking at a Bradbury crafted sky. As though God Bradbury had whispered a sentence into existence.”

Reviewed by Lou Pendergrast on 11 October 2019
We use cookies to ensure that we give you the best experience on our website. If you continue to use this site we will assume that you are happy with it.Ok