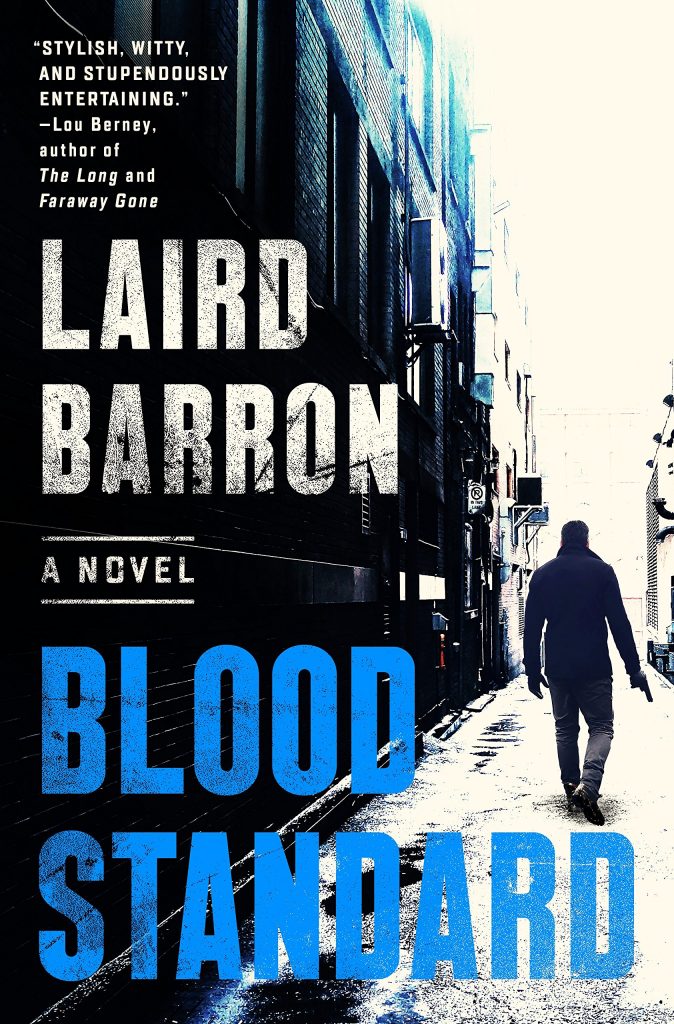 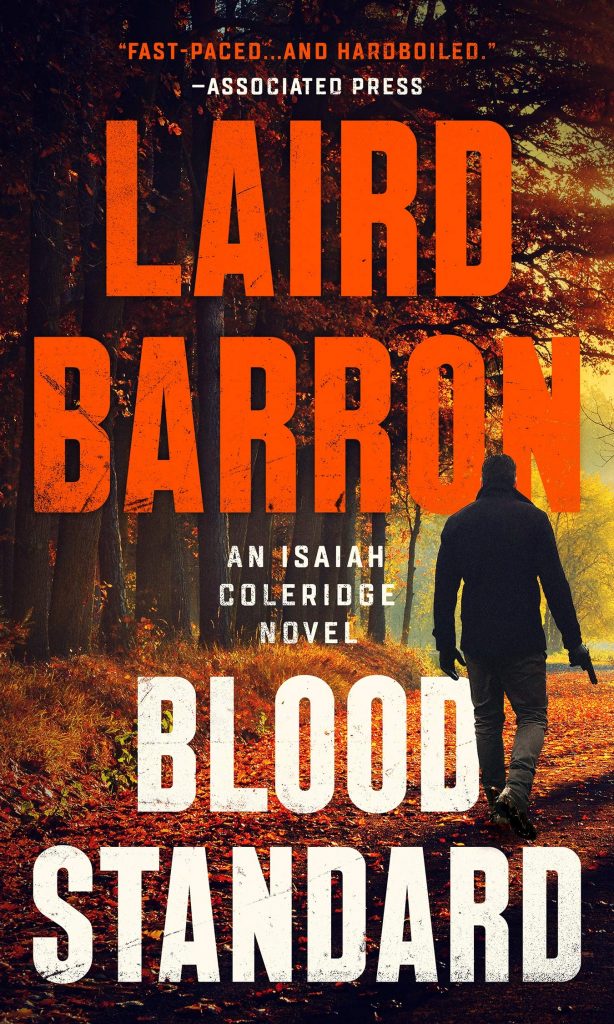 Award-winning author Laird Barron makes his crime fiction debut with a novel set in the underbelly of upstate New York that’s as hardboiled and punchy as a swift right hook to the jaw–a classic noir for fans of James Ellroy and John D. Macdonald.

Isaiah Coleridge is a mob enforcer in Alaska–he’s tough, seen a lot, and dished out more. But when he forcibly ends the moneymaking scheme of a made man, he gets in the kind of trouble that can lead to a bullet behind the ear. Saved by the grace of his boss and exiled to upstate New York, Isaiah begins a new life, a quiet life without gunshots or explosions. Except a teenage girl disappears, and Isaiah isn’t one to let that slip by. And delving into the underworld to track this missing girl will get him exactly the kind of notice he was warned to avoid.

“Laird Barron has so much fun with this character, who admires Humphrey Bogart’s take on Sam Spade and tosses off one-liners that bring the spirit of Dashiell Hammett into the 21st century.”
—Raleigh News & Observer

“The action is fast-paced, the characters well drawn, the settings vivid and the hardboiled prose quirky in the manner of a writer who cut his teeth on horror and poetry.”
—Associated Press

“Singular and excellent . . . BLOOD STANDARD sets a standard that will be hard to match.”
—criminalelement.com

“Massive, scarred Isaiah is a thug’s thug, but he’s also a well-read student of mythology. He’s indifferent to stab wounds and generates righteous mayhem in his quest. Fans of violent crime fiction will love this one and will be eager to hear more from Isaiah.”
—Booklist (starred review)

“Rendered in icy strokes of prose, Laird Barron’s Blood Standard is a remarkably self-assured crime novel—at once explosive and intimate, with a tightly wound plot and wonderfully realized characters. And then there’s Barron’s hero, Isaiah Coleridge. He’s got a dead dog named Achilles and bits of Beowulf on his breath and in his teeth. Needless to say, there’s not too many like him.”
—Michael Harvey, author of Brighton and The Chicago Way

The tale moves you forward through the roads of Isaiah, he has had it tough, wants out of mob and any other organizations, but finds himself amongst bad men again in search of a girl that nobody would pay too much attention to search for. He feels indebted to family of a farm that gave him some shelter and solace, wants to do a good turn for a change.

Writing with some solid potency and reflections on a terrible world that needs terrible counteractions, with someone prepared and able to take care of himself.
One brave scene evoked in this tale where a man just has to to save a poor puppy from cowardly men will plant some empathy for our main protagonist, half-Maori Isaiah Coleridge, “Military brat to teen menace. Gangs, fight clubs, eventually the Outfit. Your path went downhill on a bobsled with no brakes.”
But he has a chance to put things right.
Call it atonement, payback, or paying forward whilst trying to go legit or something close to it.
Isaiah is the real deal, man with heart and kicks ass, menacing going berserk on any deserveth, he is setting a standard the blood standard and the rest best keep up once he finds his ground as fixer/detective.
In his words,
“Blood had spilled. As ever, blood was the currency of my existence. Blood was the standard.
It would always be this way. Men with guns, men with knives, men with evil intentions. My world, my tribe. My calling.”
And there will be another chapter in his life, with a forthcoming work out May 2019, can’t wait to read it, and I leave you with words as a new world opens up,
“There’d be a vetting process until I got a feel for the trade. A calibration of lethal force versus delicacy and discretion. Fixing wasn’t quite as straightforward as my previous existence as a hitter. Every day presented a new problem, an unforeseen complication. Definitely the kind of work that merited hazard pay.
The only detail that mattered? I didn’t have to do anything or kill anyone that I didn’t really want to.
Famous last words.”

“As a boy, I admired Humphrey Bogart in a big way. I coveted the homburg and trench coat. I wanted to pack heat and smoke unfiltered cigarettes and give them long-legged dames in mink stoles the squinty-eyed once-over. I longed to chase villains, right wrongs, and restore the peace.
Upon surviving into manhood, I discovered the black and comedic irony that is every gumshoe’s existential plight, the secret that dime novels and black-and-white movies always elide: each clue our intrepid detective deciphers, each mystery he unravels, each crime he solves, makes the world an unhappier place. I got smart and became a gangster instead. More money, more women, and better clothes. Much less in the way of mystery. As for the misery quotient? Basically a wash.
Became a gangster. There’s a mouthful. How I wound up hitting for the far north division of the Outfit is a woeful saga. The story of how I escaped that life is no less grim, but it’s a hell of a lot shorter.”

“Upon landing, I reported to Vitale Night, a local mob potentate in charge of tundra as far as the eye could see. A medium-built guy; angular, from his hawkish nose and bony hands to his sharp knees. Shiny, graying hair and tailored duds—a Sinatra wannabe.
Night had risen through the ranks in Chicago as the premier button man of the generation prior to my own. Quick on the draw as a Wild West gunfighter with a pile of bodies to his credit. I witnessed him in action at the shooting range. Fast wasn’t really an adequate description. The pistol seemed to teleport from its holster to his hand as he emptied a magazine through a bull’s-eye the diameter of a nickel.”

“When you needed a whip hand, you sent Isaiah Coleridge. I’d set the gold standard. Those movies by Albert Broccoli about the world-famous spy? In every flick there’s a sinister, powerfully built dude in a nice suit lurking at the margins. He kills people who annoy his boss, the archvillian. I was that dude.”

“I watched the tops of the trees drift by and thought perhaps Dad had it right. I was Oppenheimer’s dread in microcosm, a miniature atom bomb. A destroyer of small things. Not worlds, nothing so grand, but individual bodies, individual lives. In little more than a week I’d crossed purposes with mercenaries, gangsters, white supremacists, hillbilly moonshiners, gangbangers, and Feds. Blood had spilled. As ever, blood was the currency of my existence. Blood was the standard.
It would always be this way. Men with guns, men with knives, men with evil intentions. My world, my tribe. My calling.”

Laird Barron was born in Alaska, where he raised huskies and worked in the construction and fishing industries for much of his youth. He is the author of several short story collections and two novels, and his work has also appeared in many magazines and anthologies. A multiple Locus, World Fantasy, and Bram Stoker award nominee, he is also a three-time winner of the Shirley Jackson Award. Barron lives in Kingston, NY.

Reviewed by Lou Pendergrast on 08 November 2018