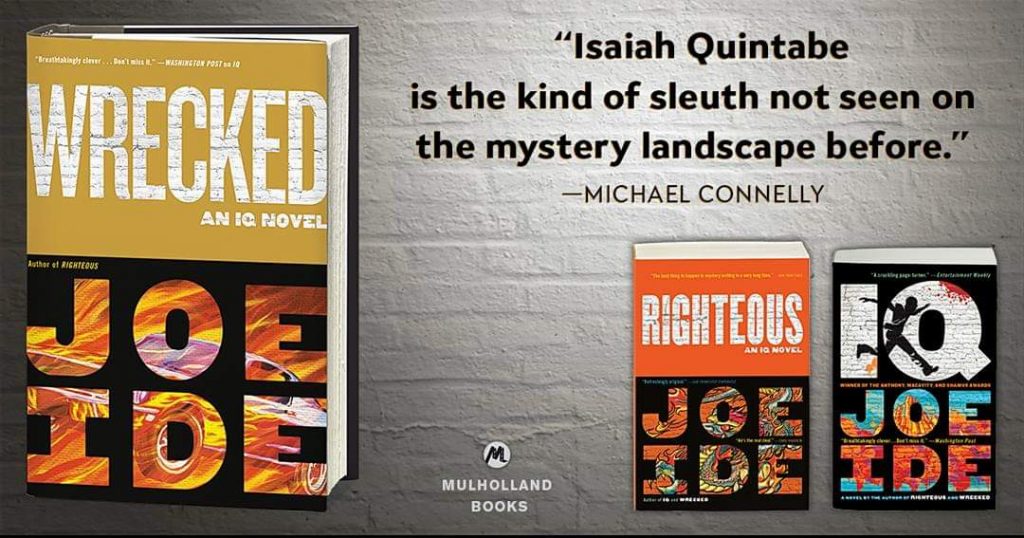 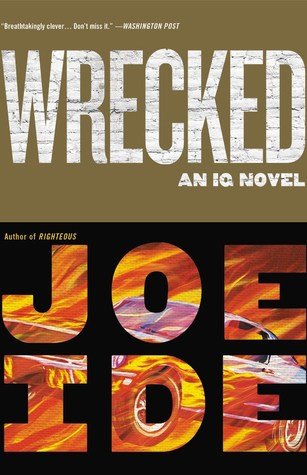 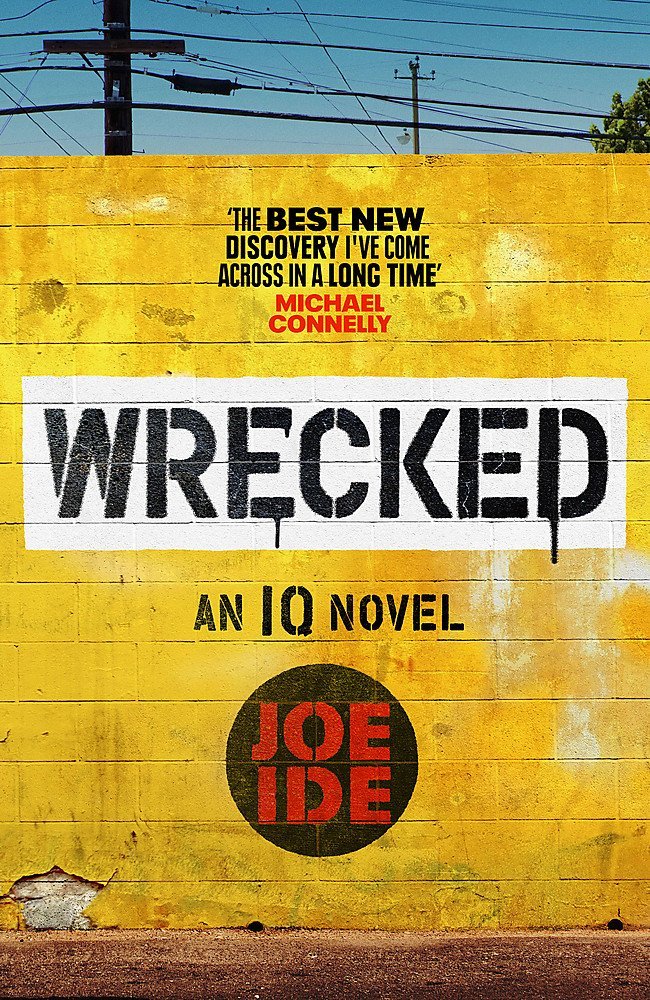 Isaiah Quintabe–IQ for short–has never been more successful, or felt more alone. A series of high-profile wins in his hometown of East Long Beach have made him so notorious that he can hardly go to the corner store without being recognized. Dodson, once his sidekick, is now his full-fledged partner, hell-bent on giving IQ’s PI business some real legitimacy: a Facebook page, and IQ’s promise to stop accepting Christmas sweaters and carpet cleanings in exchange for PI services.

So when a young painter approaches IQ for help tracking down her missing mother, it’s not just the case Isaiah’s looking for, but the human connection. And when his new confidant turns out to be connected to a dangerous paramilitary operation, IQ falls victim to a threat even a genius can’t see coming.

Waiting for Isaiah around every corner is Seb, the Oxford-educated African gangster who was responsible for the death of his brother, Marcus. Only, this time, Isaiah’s not alone. Joined by a new love interest and his familiar band of accomplices, IQ is back–and the adventures are better than ever.

“Once again, Ide brilliantly combines caper-style comedy with real-world violence and more than a dollop of complex human relationships, the kind that too often lead to mess and muddle rather than happily-ever-aftering. If you haven’t discovered this series yet, remedial action is required immediately.”
– Booklist

“The hip-hop generation’s answer to Sherlock Holmes returns fast and furious in the third installment of Ide’s celebrated series… Ide’s penchant for colorful characters, droll banter, and whackadoodle set pieces is aided by a growing command of narrative dynamics. And Isaiah Quintabe remains an engaging, fascinating protagonist… There’s a harder, darker edge to the violence that gives this ripsnorting follow-up a rueful yet resonant aftertaste, perhaps in anticipation of more unsettling jolts in the hero’s future.”
– Kirkus

“Wrecked takes Ide’s unlikely hero into new territory, with foes that test his mettle in ways his previous adversaries could not even fathom, and with a possible love interest that exposes an entirely new facet of IQ’s character.”
– BookPage

“Having read all three of Joe Ide’s novels about the young Sherlock Holmes of the ‘hood, Isaiah Quintabe, I am pleased to say that his third novel, Wrecked, is the best one yet. The stakes are higher, the suspense more intense, and the addition of a budding romance provides more character depth. Read it, enjoy it, and then impatiently wait around for the next one like the rest of us.”
– Kareem Abdul-Jabbar, author of Mycroft Holmes and Coach Wooden and Me

“With writing so sharp you may cut your fingers on the pages, Joe Ide’s latest IQ novel, Wrecked, is outrageous and laugh-out-loud funny, a page-turner with devastating observations about the dangers of state-sanctioned violence and its consequences. The characters are unforgettable, none more so than IQ himself. Like in the previous books, IQ’s tender intelligence and his tight moral compass are what make this series so stirring… and touching.”
– Attica Locke, Edgar Award-winning author of Bluebird, Bluebird 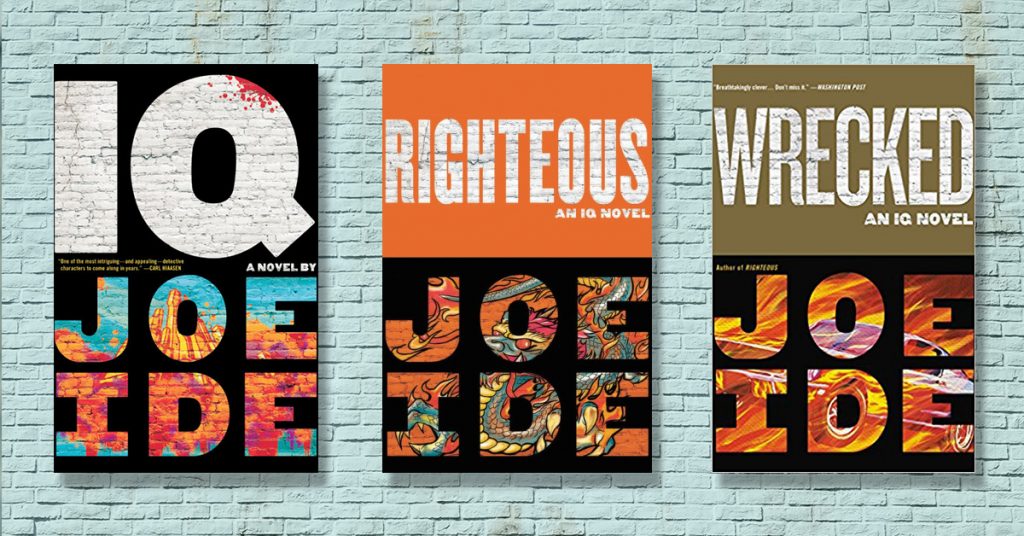 Story opens with a prologue bringing the reader back to things past, from real world news, ones of past horrors and Abu Ghraib, men and women part of those terrible images of degradation. The first chapter shifts to IQ and his management of business as a pi and trying to get some more monies in, with social media and such, he needs some changes to do and so partnering up with Dodson.

With a new client he finds himself amidst art and trying to feel again, maybe with this case he could have the chances of reigniting some passion and love. This case has him going deeper than he imagined and can he handle it and succeed up against one corrupt nasty Walczak?
For this guy the antagonist there is a big crime sheet and he is ex-CIA, and now with his own seek and destroy and hide, security company.

This time round with Isaiah Quintabe there is only so much time for coffees at The Coffee Cup shop, as there is possible opportunities with romance and the heat is on, and its big, there is a team after his client and himself.

I am happy to say I have been there from the beginning, that is the rise and growth of Isaiah Quintabe on his first episode into narrative in IQ and the second episode Righteous and now here in Wrecked.
Same old IQ, a likeable PI, with style and originality, street smarts, witty dialogue, and this time round wiser, and open for some love, and problem solving with tragedies.
With all the three narratives and chronicles of IQ, the author, Joe Ide has crafted a tale about the alternative American dream, the other side of the fences tale, tales of poetic justice in ways, in pursuit of happiness and what people in the concrete jungle will do for it.
Nicely written modern tragedies, and human terribleness, with some seek out in dangers and correct, saving lives problem solving, in a sharp witty and original style.

“Walczak sighed and drummed his fingers on the desk. He was trim and fit, like he could run on a treadmill or play tennis for weeks at a time. He had blond hair, Aryan blue eyes, and an All-American face, his smile as broad as a car salesman’s, his teeth too white to be human. More like an appliance or snow. He had on his casual Friday look. Khaki chinos, a white Egyptian cotton shirt with the sleeves rolled up, a fat gold Rolex, and for that touch of hipness, six-hundred-and-eighty-nine-dollar Kanye West sneakers in fire-hydrant yellow. If he was handling your portfolio you’d give him the passcode to your brokerage accounts and not worry about a thing.”

“They had their own little cabal; Walczak, Jimenez, Hawkins, and Owens. They called themselves the Four Horsemen. If Abu Ghraib wasn’t the apocalypse, nothing was. Walczak was different from the other CIA guys. He got right in there and tortured prisoners personally, which was weird if you didn’t have to. He was also a clean freak, showering four or five times a day and paying somebody to do his laundry. He only went to the bathroom if he was alone and washed his hands like an eye surgeon. If he was anywhere but in his office he wore latex gloves.
With the detainees, he always went that extra mile. If they’d beaten a guy senseless and he was lying on the floor, Walczak would kick him. If a detainee had a broken leg, he’d step on it. Walczak organized contests for the dog handlers. If you were the first one to make a prisoner piss on himself, you got a bottle of booze. He ordered a detainee to be crucified. Hung him by his arms with a hood over his head. The guy died, and they buried him just outside the prison walls. Why not? Who was going to dig up some asshole in a killing field? Walczak was delighted when the detainee’s family was being held too. He’d bring in the guy’s wife, tell him all the different ways you were going to defile her if he didn’t start talking. Then he’d grab her tits or rip off her burka. It worked better than sic’ing Slayer on him. There wasn’t a lot in the news about rape but there should have been. The whole cell block was rape central. Men, women, boys, girls. Didn’t matter.
Walczak’s specialty was water-boarding. He’d get excited about it like he was getting the prisoner ready for a space launch. The plank had to be tilted down fifteen degrees for maximum effect, a number Jimenez suspected Walczak made up. The prisoner was strapped down completely, ankles to shoulders, even his head. Walczak didn’t like wigglers. The towel had to be drawn taut over the prisoner’s face so as not to impede the water flow, and Walczak ’s preference was to use a hose. A stream of water made the sense of drowning continuous. If no hose was available, Walczak used ten-gallon gasoline drums. None of this was necessary. A bucket and fifteen or twenty seconds and the guy would be choking and gagging and freaking out. A trained marine couldn’t hack it for more than thirty. But Walczak let it go on. And on. And on. Until the guy was actually drowning and everybody in the room was alarmed.”

“This was way deeper than he’d ever imagined. Walczak had huge resources at his command. Trained operatives, computer analysts, drones, satellite photography, military and law enforcement personnel, 17,000 employees, and an arsenal of every weapon imaginable. He could take over France.”

Reviewed by Lou Pendergrast on 30 September 2018