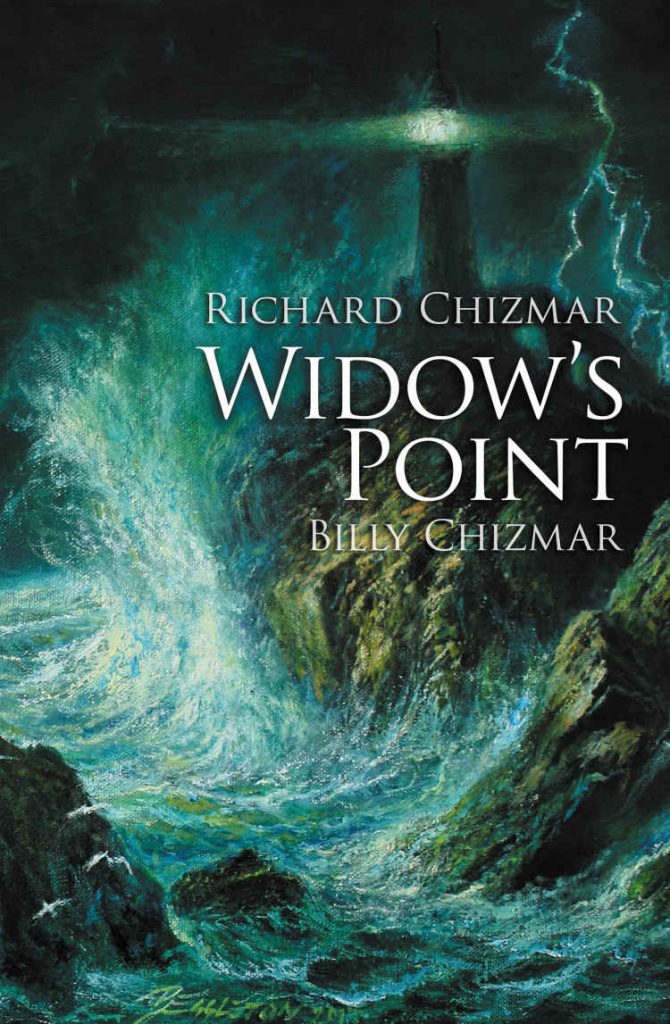 Longtime residents of Harper’s Cove believe that something is wrong with the Widow’s Point Lighthouse. Some say it’s cursed. Others claim it’s haunted.

Originally built in 1838, three workers were killed during the lighthouse’s construction, including one who mysteriously plunged to his death from the catwalk. That tragic accident was never explained, and it was just the beginning of the terror. In the decades that followed, nearly two dozen additional deaths occurred in or around the lighthouse including cold-blooded murder, suicide, unexplained accidents and disappearances, the slaughter of an entire family, and the inexplicable death of a Hollywood starlet who was filming a movie on the grounds.

The lighthouse was finally shuttered tight in 1988 and a security fence was erected around the property. No one has been inside since.

Thomas Livingston is the acclaimed author of thirteen books about the supernatural and this evening he will enter the Widow’s Point Lighthouse, searching for material for his next bestseller. He will be locked inside for the weekend with no way of contacting the outside world. And although no human has stepped foot inside the structure in nearly three decades, Livingston will not be alone.

In this remarkable collaboration, father and son writing team, Richard and Billy Chizmar, combine forces to tell a chilling ghost story that will make you think twice about what is waiting for you in the dark. This novella is a much-expanded version of the short story of the same title.

Acclaimed horror author Chizmar and his son deliver an original and terrifying cursed-place tale that will leave readers looking over their shoulders… this novella is viscerally terrifying, realistic, and intense. It is a modern ghost story that will scare even the most seasoned horror reader and will be eagerly devoured by fans of paranormal-investigation tales as well as those who enjoy intense cursed-place stories…”
— Booklist

“The spirit of William Hope Hodgson is alive and well in Widow’s Point, a briny ghost story infused with sinister new life by Richard and Billy Chizmar. If you’re looking for a tale that has you reconsidering that trip to the coast while telling yourself those whispers from ‘neath your bed are simply the wind, you’ve found it. Widow’s Point is a chilling addition to the haunted house subgenre.”
— Kealan Patrick Burke, Bram Stoker Award-winning author of Sour Candy and Kin

“With Widow’s Point, the Chizmars deliver a fantastic new take on several old tropes, making the sea and haunted house stories scary again. A masterful, atmospheric and genuinely frightening ghost story. I loved it.”
— Brian Keene, Grandmaster Award winning author of The Complex and End of the Road

“Widow’s Point simmers, bubbles, and boils over in the most seductive, troubling, and finally throat-gripping manner possible, and along the way neatly solves the problem of how to handle the fate of a first-person narrator of a tale remarkable for accelerating dread. Richard and Billy Chizmar have given us a cold and delicious treat.”
— Peter Straub, New York Times bestselling author of Ghost Story and In the Night Room

“Eleanor Vance would feel right at home in the lighthouse of Widow’s Point. In a significant literary achievement, Richard and Billy Chizmar have retained the quiet terrors of the traditional haunted house story while updating its form for our fragmented Facebook age. Told in snippets of video camera footage and contemporaneous voice recordings, with the history of the lighthouse narrated in excerpted readings from an old diary, the splintered narrative reflects not only the mental disintegration of the tale’s protagonist, but the fractured way in which today’s society absorbs information. At once comfortably old-fashioned and bracingly contemporary, Widow’s Point is a creepy delight.”
— Bentley Little, bestselling author of The Influence and The Handyman

“Widow’s Point has that William Hope Hodgson dark aura about it, but it’s far better written, and there’s a deeper theme at work. A ghost story of the first order. It makes the skin crawl and the shadows in your bedroom creep. Cheers to father and son team Richard and Billy Chizmar.”
— Joe R. Lansdale, award-winning author of Rusty Puppy and Blood and Lemonade

The last lighthouse tale I had read was The Light Between the Oceans, it was a wonderful moving heartfelt love story. There was a grande lighthouse in that too.

This is no that tale.

Sympathy for whoever so steps forth within the Widow’s Point lighthouse.

What was Thomas Livingston bestselling author, hoping to find in there?
Maybe some truth or falsehood behind the many stories and legends surrounding Widow’s Point.
Caution if you are fragile and have heart or mind prone to nightmares do not read before sleep this may haunt you.

One may think about the usual elements that appear in haunted house tales, but this is not a residential street or a house, it is a dwelling by the sea, a lighthouse watching over the mystical and haunting ocean, a place that was meant to install security watching over with its eye those stranded.

The main part of this narrative is written with transcriptions of video and audio footage, with also various paragraphs from a journal of a child of old, once a resident.
Narrative taking you in by the hand with first person narration, with all the terror and fright of an isolation and crucible tale, the sounds, the smells, the…, evoking within the reader great fear and trepidation.
Flowing like sea into the narrative with lucid formation and hooking in with no words wasted, all the necessary details to haunt. More please, of these two terrible minds with two haunting voices.

“My name is Thomas Livingston, bestselling author of Shattered Dreams, Ashes to Ashes, and eleven other bestselling non-fiction volumes of the supernatural. I’m here today on the windswept coast of Harper’s Cove at the far northern tip of Nova Scotia standing at the foot of the legendary Widow’s Point Lighthouse.
“According to historical records, the Widow’s Point Lighthouse, originally named for the large number of ships that crashed in the rocky shallows below before its existence, was erected in the summer and autumn of 1838 by Franklin Washburn II, proprietor of the largest fishing and gaming company in Nova Scotia.”
Livingston’s face grows somber.
“There is little doubt that the Widow’s Point Lighthouse led to a sharp decrease in the number of nautical accidents off her shoreline—but at what cost? Legend and literally centuries of first-hand accounts seem to reinforce the belief that the Widow’s Point Lighthouse is cursed… or perhaps an even more apt description… haunted.”

RICHARD CHIZMAR is a New York Times and USA Today bestselling author. He is the co-author (with Stephen King) of the bestselling novella, Gwendy’s Button Box and the founder/publisher of Cemetery Dance magazine and the Cemetery Dance Publications book imprint. He has edited more than 35 anthologies and his fiction has appeared in dozens of publications, including Ellery Queen’s Mystery Magazine and multiple editions of The Year’s 25 Finest Crime and Mystery Stories. He has won two World Fantasy awards, four International Horror Guild awards, and the HWA’s Board of Trustee’s award. Chizmar (in collaboration with Johnathon Schaech) has also written screenplays and teleplays for United Artists, Sony Screen Gems, Lions Gate, Showtime, NBC, and many other companies. Chizmar’s work has been translated into many languages throughout the world, and he has appeared at numerous conferences as a writing instructor, guest speaker, panelist, and guest of honor. Please visit the author’s website at: Richardchizmar.com

BILLY CHIZMAR’s short stories have been published in various anthologies including Fearful Fathoms and Dead Harvest. His essay, “The Role of God in Stephen King’s Desperation” was published in the non-fiction collection, Reading Stephen King. In 2017, he directed/co-wrote/starred in a short horror film, Gone, which has been screened at numerous film festivals around the country. Chizmar was recently named a U.S. Lacrosse Academic All-American during his senior year at the St. Paul’s School and is currently a freshman at Colby College.

Reviewed by Lou Pendergrast on 09 January 2019