Book Review: Where the Crawdads Sing by Delia Owens - More2Read

Where the Crawdads Sing by Delia Owens 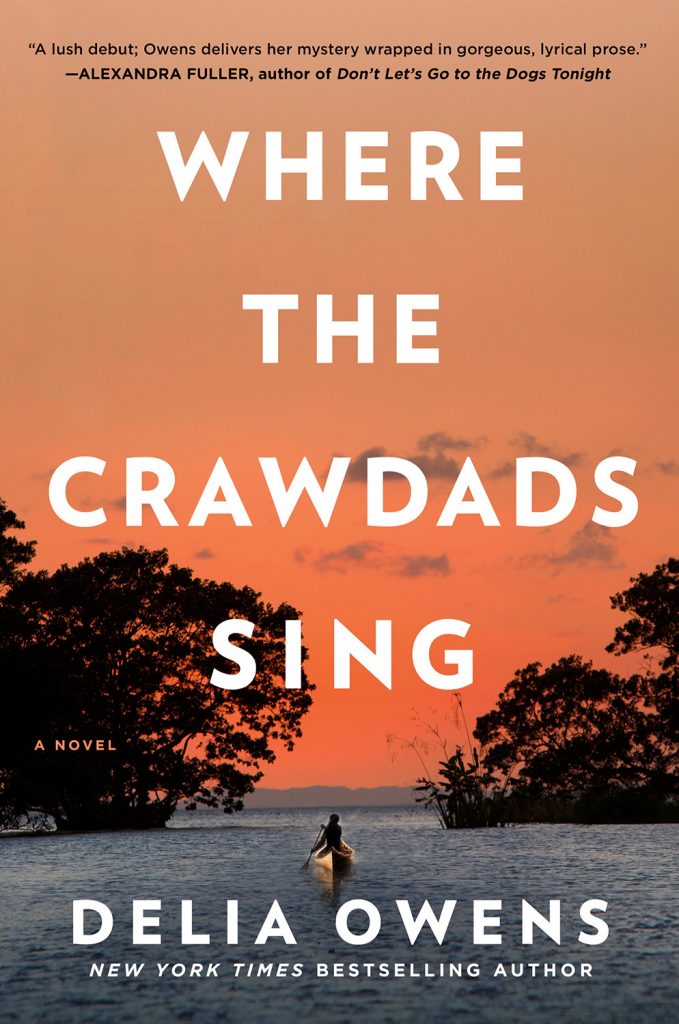 Where the Crawdads Sing by Delia Owens

How long can you protect your heart?

For years, rumors of the “Marsh Girl” have haunted Barkley Cove, a quiet town on the North Carolina coast. So in late 1969, when handsome Chase Andrews is found dead, the locals immediately suspect Kya Clark, the so-called Marsh Girl. But Kya is not what they say. Sensitive and intelligent, she has survived for years alone in the marsh that she calls home, finding friends in the gulls and lessons in the sand. Then the time comes when she yearns to be touched and loved. When two young men from town become intrigued by her wild beauty, Kya opens herself to a new life–until the unthinkable happens.

Perfect for fans of Barbara Kingsolver and Karen Russell, Where the Crawdads Sing is at once an exquisite ode to the natural world, a heartbreaking coming-of-age story, and a surprising tale of possible murder. Owens reminds us that we are forever shaped by the children we once were, and that we are all subject to the beautiful and violent secrets that nature keeps.

Praise for Where the Crawdads Sing :

“A lush debut novel, Owens delivers her mystery wrapped in gorgeous, lyrical prose. It’s clear she’s from this place—the land of the southern coasts, but also the emotional terrain—you can feel it in the pages.  A magnificent achievement, ambitious, credible and very timely.”
— Alexandra Fuller, New York Timesbestselling author of Don’t Let’s Go to the Dogs Tonight

“Delia Owen’s gorgeous novel is both a coming-of-age tale and an engrossing whodunit.”— Real Simple

“Lyrical . . . Its appeal ris[es] from Kya’s deep connection to the place where makes her home, and to all of its creatures.” — Booklist

“With prose luminous as a low-country moon, Owens weaves a compelling tale of a forgotten girl in the unforgiving coastal marshes of North Carolina. It is a murder mystery/love story/courtroom drama that readers will love, but the novel delves so much deeper into the bone and sinew of our very nature, asking often unanswerable questions, old and intractable as the marsh itself. A stunning debut!”
— Christopher Scotton, author of The Secret Wisdom of the Earth

“Where The Crawdads Sing carries the rhythm of an old time ballad. It is clear Owens knows this land intimately, from the black mud sucking at footsteps to the taste of saltwater and the cry of seagulls.”
— David Joy, author of The Line That Held Us

A memorable character in a poignant tale.
Catherine Danielle Clark is one of self reliance and beauty, a strong female character, a misfit with grit.
Amongst the drunkenness and violence of her pa hitting out at ma and her and siblings, in time, she would be left to live alone to her own devices and fate, this tale follows her metamorphosis.
Answers and truths to be known to mysteries and a ballad of love in hand will captivate till the end.
She is a character living on the edge of life and people but almost in the best place in ways, with minimalism and nature with plenty heart, this was a great excursion on the complexities of the heart of one Catherine Danielle Clark aka marsh girl.

A melancholic tale of tragedies, loss, complexities and frailties, coming of age, love lost and newly founded, what a great debut, no words wasted with great voice, a lucid poem of mystery playing out before for the reader.

“On the morning of October 30, 1969, the body of Chase Andrews lay in the swamp, which would have absorbed it silently, routinely. Hiding it for good. A swamp knows all about death, and doesn’t necessarily define it as tragedy, certainly not a sin.”

“A great blue heron is the color of gray mist reflecting in blue water. And like mist, she can fade into the backdrop, all of her disappearing except the concentric circles of her lock-and-load eyes. She is a patient, solitary hunter, standing alone as long as it takes to snatch her prey. Or, eyeing her catch, she will stride forward one slow step at a time, like a predacious bridesmaid. And yet, on rare occasions she hunts on the wing, darting and diving sharply, swordlike beak in the lead.”

“Kya knew Chase had chosen not to go to college but to work for his dad. He was a standout in town, the tom turkey. And somewhere within, she worried she was also a piece of beach art, a curiosity to be turned over in his hands, then tossed back on the sand. But she walked on. She’d given love a chance; now she wanted simply to fill the empty spaces. Ease the loneliness while wailing off her heart.”

Reviewed by Lou Pendergrast on 01 August 2018