Book Review: What It Was (Derek Strange and Terry Quinn #5) by George Pelecanos - More2Read 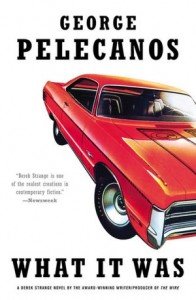 This novel stemmed from George Pelecanos’s novel The Night Gardener where a character Red ‘Fury’ Jones was planted as a fable, he wanted to give a whole story with him in as the bad boy.
And what a story it is, well done this is a throwback to the bygone days of Plymouth automobiles, Afro puffs, when single tracks were on 45 records needed of a spacer, no mobiles, social media, or CCTV. Good old detective work knocking down doors and shacking up perps.
He delivers a kind of tale that could be quite true by the letter.
Red and his Madame Coco are wreaking havoc in town and making themselves known.
They are robbing, killing dealers, testers and suppliers.
Bobby Odum a tester of substances is the main focus of Frank “Hound Dog” Vaughn a Washington, D.C. cop investigating his death by the gun of notorious Red. He’s been smoked and his stash taken, that stash happens to be on loan from The Syndicate an out of town mobsters, a whole load of fireworks is about to go off. The syndicate hire two contract man Lou Fanella and Gino Gregorio.
Red is biting off more than he can chew.
Derek Strange our other main character a P.I, that George has been running with in previous novels, has been hired by a lady to recover her precious ring that was in possession of the murdered Bobby by the hands of Red. This interlocks Derek Strange a P.I and Vaughan a cop together in an unofficial way in hot pursuit of bringing down and catching the over eager gun totting up and coming bad guy Red.

This is the kind of story I was waiting to read from Pelecanos, he writes with good characters, crisp dialogue and slick style. The pace gathers momentum and delivers a satisfying entertaining rumble tumble tale.

Watergate, Afro puffs, Colt 22 Woodsmen and Plymouth Fury GT Sport V8 are all from a period of time we will look back on and this story makes you feel part of.
One Red ‘Fury’ Jones is leaving behind a trail of fire making this one, a must read.

Settle up and listen to the track of this stories days and featured in this book ‘If Loving You is Wrong’ by Luther Ingram via a single 45 (don’t forget the spacer in the middle) and savor.
Purchase from Amazon.com

Reviewed by Lou Pendergrast on 02 February 2012

George Pelecanos returns to his roots

George Pelecanos returns to his roots – and to beloved Private Investigator Derek Strange – in an all-consuming detective story set in 1970s D.C.