Vanished in the Dunes by Allan Retzky 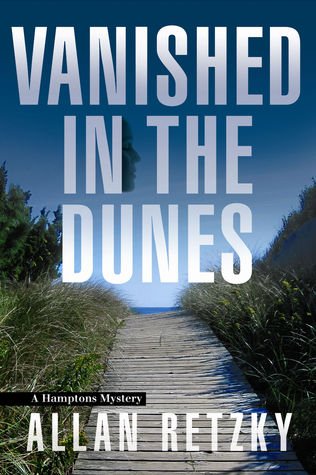 Amos Posner has a lovely house in the upscale Hamptons beach community of eastern Long Island. But recent events in his life are preventing him from enjoying it. His employer, an international trading firm, fired him after making him the scapegoat for some shady business deals. His wife, a highly successful Manhattan lawyer, has not taken kindly to his job situation, and their marriage is under considerable stress.

Amos is spending most of his time at the beach house, alone, and not at all happy. So he is highly vulnerable when a beautiful woman approaches him on a bus – the Hampton Jitney – from Manhattan to the Hamptons and persuades him to show her around the area on her day off from her job as a psychiatric resident at a Manhattan hospital. When Amos reluctantly agrees, he gets far more than an ego boost. He gets a nightmare beyond imagination. And the cascading events could cost him more than the loss of his job and his wife. They could cost him his life.

Amos Posner, it’s seems at the start of this story, needs clarity it’s clear he is struggling to see through the foggy window of his life.
He was an international trader for years with a large firm but lost his position two years ago. He is married happily? maybe he’s about to find out through dark days that follow his meeting with a woman.

His chance encounter on a bus with a attractive woman in a pink and white catapulted his life into a deadly spiral of seduction, deceit and deception.

There are characters in this story who have different religions and roots, their backgrounds do not hold importance in this mystery. The story is more of the psychological kind.

An interesting detective who steps on to the scene detective Wisdom, when Amos meets him he describes him as ‘like that shrewd yet modest television detective Colombo, except he has neither a cigar not a raincoat.”
I also liked the usage in this story of a particular drug that one character takes for a certain illness.

The story is not too long, it holds it’s reader with I think just the right length.
This was a modest debut which had me picturing it as an old black and white movie adaptation unfolding, written by James M Cain.
Cain wrote wonderful noir stories not too long, psychology twists, murder and love involved. I would say this is the same quality but to have me think about that author of bygone days is something.