UR by Stephen King - more2read.com

UR by Stephen King

I confess! I have committed a sin I have avoided reading novels from The Grandmaster writer Stephen King!
I repent! I will make my up-most effort in reading my way through The Dark Tower series, one book a month minimum.
King was one of the first to delve into publishing via the kindle from this genre. This novella will be looked upon in the future as the genesis of the kindle era. His talent is to turn anything into a craft from kindle to Riding the Bullet. Great creative story.

EXCERPT “ Does this gadget of yours have a smell?” “Nope,” Henderson replied. “Not really. But when you turn the pages…here, with this button…they kind of flutter, like in a real book, and I can go to any page I want, and when it sleeps, it shows pictures of famous writers, and it holds a charge” ”

“ “The Tower trembles; the worlds shudder in their courses. The rose feels a chill, as ofwinter.” ”

“ What seemed major—what loomed over his life and very sanity—were the riches hidden within that slim pink panel of plastic. He thought of all the writers whose passing he had mourned, from Norman Mailer and Saul Bellow to Donald Westlake and Evan Hunter; one after another, Thanatos stilled the magic voices and they spoke no more. But now they could. They could speak to him. He threw back the bedclothes. The Kindle was calling him. Not in a human voice, but in an organic one. It sounded like a beating heart, Poe’s tell-tale heart, coming from inside his briefcase instead of from under the floorboards, and— Poe! Good God, he had never checked Poe! ” 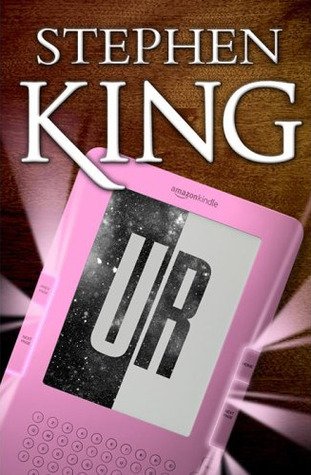 BUY FROM AMAZON.CO.UK OR AMAZON.COM

Reviewed by Lou Pendergrast on 24 August 2011