Under the Skin by Michel Faber - more2read.com

Under the Skin by Michel Faber 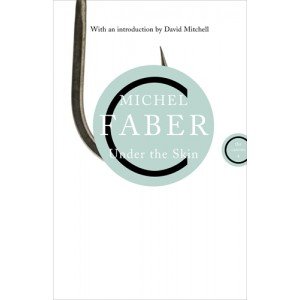 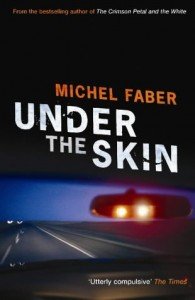 In the opening pages of Under the Skin, a lone female is scouting the Scottish Highlands in search of well-proportioned men: “Isserley always drove straight past a hitch-hiker when she first saw him, to give herself time to size him up. She was looking for big muscles: a hunk on legs. Puny, scrawny specimens were no use to her.” At this point, the reader might be forgiven for anticipating some run-of-the-mill psychosexual drama. But commonplace expectation is no help when it comes to Michel Faber’s strange and unsettling first novel; small details, then major clues, suggest that something deeply bizarre is afoot. What are the reasons for Isserley’s extensive surgical scarring, her thick glasses, her excruciating backache? Who are the solitary few who work on the farm where her cottage is located? And why are they all nervous about the arrival of someone called Amlis Vess?

The ensuing narrative is of such cumulative, compelling strangeness that it almost defies description. The one thing that can be said with certainty is that Under the Skin is unlike anything else you have ever read. Faber’s control of his medium is nearly flawless. Applying the rules of psychological realism to a fictional world that is both terrifying and unearthly, he nonetheless compels the reader’s absolute identification with Isserley. Not even the author’s fine short-story collection, Some Rain Must Fall, prepared us for such mastery. Under the Skin is ultimately a reviewer’s nightmare and a reader’s dream: a book so distinctive, so elegantly written, and so original that one can only urge everybody in earshot to experience it, and soon. –Burhan Tufail

Hmm what should I say or in this case what should I not say.
The winning element of this story is mystery, being surprised and the strangeness that comes with it.
This original story is one that can possibly stir some repulsion in the reader and some thought on our human race and trusts that we may allude to.
A captivating story with a female main protagonist that you DO NOT want to hitch a ride with.
This one does not get pigeonholed into a certain genre it has a wide scope of attraction.

Reviewed by Lou Pendergrast on 02 December 2012