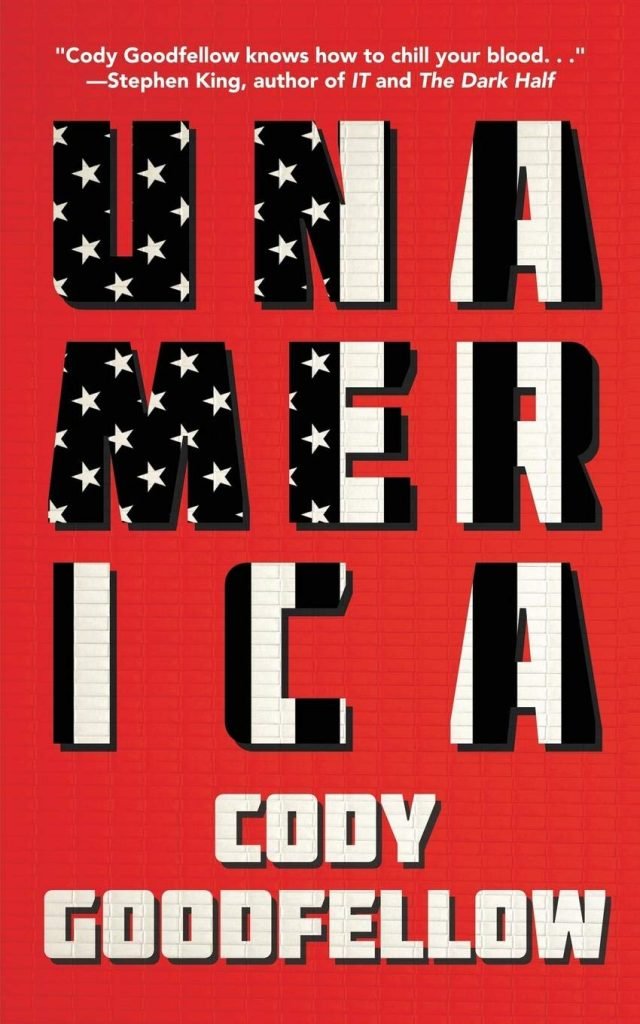 “Cody Goodfellow knows how to chill your blood. . .” —Stephen King, author of It and The Dark Half

Buried half a mile beneath the desert sands of the US-Mexico border, exists a secret city that holds the promise of everything that draws refugees and immigrants to America––liberty, luxury and excess. . .

In this Terminal Autonomous Zone, two prophets will rise—one, a reckless seeker who believes the psychedelic mushrooms he’s discovered will spur a revolution in human consciousness; the other, a fire-and-brimstone preacher endowed by strange angels with a power that heals the sick and raises the dead—and as rival factions emerge around them, a march toward war begins . . .

“A vertiginous, conspiratorial rabbit-hole set at the end of the American century. . . Unamerica fuses the acid paranoia of Thomas Pynchon’s The Crying of Lot 49 with the low-life and high-tech exile of John Carpenter’s Escape From New York. Goodfellow leads us down a path to salvation that’s populated with depraved conglomerates, violent criminals, bizarre shamans, cruel angels, and strangest of all. . . hope.”
—Ross E. Lockhart, editor of Cthulhu Fhtagn! and Eternal Frankenstein

“It doesn’t matter if he’s doing crime, Lovecraftian short stories, strange literary fiction disguised as madman narratives, horror, or something in between, you always get an explosive mixture of ideas and superb use of language when reading Cody Goodfellow.”
—Gabino Iglesias, author of Coyote Songs and Zero Saints

An American Nolan Hatch gets himself lost and caught up in somewhere off-the-grid, he finds himself in Unamerica.
“It’s a city of tens of thousands, somewhere beneath the Mexican desert, but it’s still a slum. The games may be cruel and life may be cheap, but Hatch knows how to play.”

This Unamerica requires many things and his first task is a barcode on his wrist then the navigational and survival skills needed through a place where, “Crime is rampant, cultivated and harvested like a product in itself.”
He encounters many characters, bizarre and strange, one key player that will set him on his quest for enterprise and entrepreneurship would be Jamie, the connection to the top
dog in Unamerica, amongst all its denizens from every margin of American life.
Nolan puts art into chemistry they say, an engineer of human consciousness, he has something special to give, a transcending product, a fungal-derived tryptamine.
Will he be successfully whilst the men behind the scenes at work in this chess game in play, behind this sinister labyrinth of Unamerica?

This glorious Unamerica what a splendid place.
“Unamerica is a self-contained underground city run by a coalition of corporations in partnership with the federal government under the auspices of the Department of Commerce. An ideal focus group environment, where products from Olestra and artificial hearts to electronic mind control and nerve gas are tested on a captive market.”

A hook in this work is how this all will play out and the journey through this place and the quest of Nolan Hatch against such manipulations and capitalisation at work, and will he be success in spreading a new spiritual awakening or will a spiritual destruction come to fruition.
There will be social satire and commentary contained within.

Normality does not exist in this tale, it’s one mind twist of American dreams askew, Unamerica is a ride though nightmarish sensory world of deprivation and lust, an intoxication overload in this subterranean labyrinth of hell on earth, a divine comedy in a Cody Goodfellow vision.
Past read tales come to mind after reading this, like that of The War of the End of the World by Mario Vargas Llosa with Fight Club by Chuck Palahniuk.

If this is evolution then end of the world is near, in this narrative, with all the weird and Batshit craziness. The whys, the how it came about, and the journey of this Unamerica has the reader implanted and juxtaposed amongst terrible things, peoples, adjectives and nouns that will shock, all adding to this entertaining and interesting ride with sentences.
An original tale with a cautionary and dispossessed version of America the reader would hope to remain forever in fiction.
A work delivered with polarised potent prose taking you by the hand into the mind of Cody Goodfellow and it is one hell of a creation factory of characters and realms.

“At first glance, it’s a city of Kowloon Walled Citie s, built out of gigantic Legos by a deeply disturbed demiurge who truly sucks at Tetris. Thousands of brightly colored cargo containers in haphazard stacks, some reaching to the ceiling in skyscraper tenement blocks, and some attached like barnacles to the columns supporting it, carved up by staggered streets that radiate like broken spokes from a vast, central pillar bedecked with searchlights and Times Square-style animated billboards.”

“Jaime breaks it down as simple as he can, whips out his phone and shows the tourist a map of the cavern, which makes him laugh and observe that it looks just like fu****g Burning Man, whatever that is.
The city is a f****d-up pizza a mile and a half long by three-quarters of a mile wide, divided into slices by radiating avenues and lavishly topped with hatred and vice. In the center is the Arcade, a massive tower that reaches the roof of the cavern, the largest of twelve in the city. Its lower floors are all retail shops and medical clinics where every product and service is free, but carefully monitored.
Everyone in Unamerica is a guinea pig. Whatever else they do with their time, everyone has a schedule of surveys, blood tests and examinations to pay their way. The Arcade is neutral territory and patrolled by the cops who use Star Wars-shit experimental weapons and lethal force with total impunity, so nobody f***s with them.
The rest of the city is exactly what it looks like—a gigantic, subterranean megaslum. A feudal ochlocracy wherever it’s not pure anarchy. Everyone who has a place in the city holds onto it by force of arms or by paying protection to one or more of a hundred street gangs and criminal organizations.”

“Right. People work out and diet because they’re terrified of being rejected. Rich, successful people work hard and cheat the system because they’re afraid of being poor. Everybody is motivated to do what they do by fear of the opposite. Couple that with our fear of accepting ourselves, and you end up with homophobic politicians who make honest gay folks’ lives hell, getting caught blowing the Vienna Boys’ Choir. You get people killing themselves and each other because their lives aren’t TV commercials. You get people drugging themselves and seeking validation from products, that they’ll never get from within.”

“You know milusos—men with nothing, who will do anything for enough money to get by, men who know nothing and thus, will believe anything. Remember that word, for that is what you are. George Orwell says, a plongeur is a slave, and a wasted slave, doing stupid and largely unnecessary work. He is kept at work, ultimately, because of a vague feeling that he would be dangerous if he had leisure. And educated people, who should be on his side, acquiesce in the process, because they know nothing about him and consequently are afraid of him—”

Reviewed by Lou Pendergrast on 27 March 2019