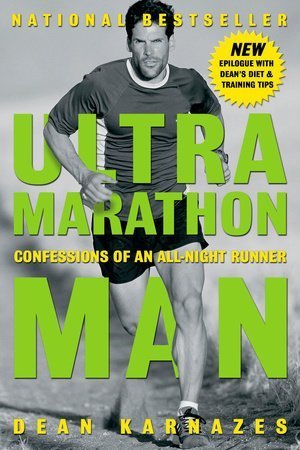 Ultrarunning legend Dean Karnazes has run 262 miles-the equivalent of ten marathons-without rest. He has run over mountains, across Death Valley, and to the South Pole-and is probably the first person to eat an entire pizza while running. With an insight, candor, and humor rarely seen in sports memoirs (and written without the aid of a ghostwriter or cowriter), Ultramarathon Man has inspired tens of thousands of people-nonrunners and runners alike-to push themselves beyond their comfort zones and be reminded of “what it feels like to be truly alive,” says Sam Fussell, author of Muscle.

And in the new paperback edition, Karnazes answers the two questions he was most asked on his book tour:

– What, exactly, do you eat?
– How do you train to stay in such good shape?

“Full of euphoric highs. Rusisng with Karnazes [is] like setting up one’s easel next to Money or Picasso… His book describes a journey into distance running that is much less about sweat than about the emotional terrain that unfolds at the frontier of endurance.”
–The New York Times

“[Karnazes’] spirited memoir… can help mere mortals who want to push past their perceived limits or simply jump-start their sedentary lives.”
–Chicago Tribune

“There is clearly something Nietzschean in Karnaze’s makeup…that whatever doesn’t kill you makes you stronger.’
–Los Angeles Times

“An exhibition of unadulterated courage and mental and physical stamina [for] anyone who likes to read about ordinary people doing extraordinary things.”
–Boston Globe

“[Dean is] like a comic book superhero who remains undercover by day, every bit the unremarkable family man.”
–The London Daily Telegraph

“A real life Forrest Gump… [Karnazes] has pushed his body to limits that are beyond masochistic. They’re inhuman.”
–Newsday

Ultimately the author has laid down in words answers to why he runs, what compels him to do ultramarathon running, his desires and passions, all honestly written in easy reading nicely packet together narrative that can inspire and aid the one wanting to push themselves to their limits and beyond. Heartfelt testaments from a man who is truly someone pushing himself beyond human limitations.
He tells how he had a need to fill a void despite having a good job and financial security, and he takes the reader upon his road expounding on his pursuit of happiness by doing something that makes him happy, running, very very, long distances.
Those distances went through extremes, from South Pole -128.6 degrees Fahrenheit, to “Running down the white line on the highway to hell,” at Badwater with the temperatures can exceed 130 degrees Fahrenheit with asphalt melting the soles of his trainers.
He takes you through all these extraordinary challenges daring greatly into the arena of human heart at conflict with itself, the enemy being the idea that something was not possible, the self into untrodden terrain building and discovering inner strengths and mental toughness, he is a fine example of this and then there are the charities, lives inspired, lives in need of a donor helped, the people he aided, in these efforts a great fete.
He symbolises sheer determination, endurance, and never giving up, and following your dream, the king of pain not giving in and up, a family man, proving, “nice guys can finish first.”

“And now’s the time to ponder his question. Millions of Americans run. They run for the exercise, for their cardiovascular health, for the endorphin high. In 2003, a record-setting 460,000 people completed one of the country’s many marathons. They pushed the outer limits of their endurance to complete the 26.2 miles.
Then there’s the small hardcore group of runners, a kind of runners’ underground, who are called ultra-marathoners. For us, a marathon is just a warm-up. We run 50-mile races, 100-mile races. We’ll run twenty-four hours and more without sleep, barely pausing for food and water, or even to use the bathroom. We run up “and down mountains; through Death Valley in the dead of summer; at the South Pole. We push our bodies, minds, and spirits well past what most humans would consider the limits of pain and exertion.
I’m one of the few who’s run beyond 100 miles without resting, which I guess makes me an extra-ultra-marathoner. Or just nuts. Whenever people hear that I’ve run 100 miles at a clip, they inevitably ask two questions. The first is “How can you do that?” The second, and much harder to answer, is the same one that pizza guy asked me: “Why?”

“My newfound love of running seemed to awaken a sense of hope. There was something in our future to look forward to; something, perhaps, grand and monumental. Attempting to run 100 miles was a spectacular aspiration, and the pursuit of this dream seemed to transcend career goals and other ambitions.”

“For me, I knew, running great distances was a release; and, on some level, my boundless energy needed an outlet. The average obsessive-compulsive takes seven years to get help. The average runner covers 10,920 miles in that time. Whether my affliction was clinical is anyone’s guess; I never did submit to testing. Some seek the comfort of their therapist’s office, others head for the corner pub and dive into a pint, but I choose running as my therapy. It was the best source of renewal there was. I couldn’t recall a single time that I felt worse after a run than before. What drug could compete? As Lily Tomlin said, “Exercise is for people who can’t handle drugs and alcohol.
I’d also come to recognize that the simplicity of running was quite liberating. Modern man has virtually everything one could desire, but too often we’re still not fulfilled. “Things” don’t bring happiness. Some of my finest moments came while running down the open road, little more than a pair of shoes and shorts to my name. A runner doesn’t need much. Thoreau once said that a man’s riches are based on what he can do without. Perhaps in needing less, you’re actually getting more.”

“It was a schizophrenic existence—renegade extreme athlete on one hand, corporate loyalist on the other—but I was willing to do whatever it took, and I spent the balance of a year largely concealing my behavior from co-workers. Running was a passion; work paid the rent and Julie’s dental-school bills. There would be no sacrificing my “company man” reputation for running. So I downplayed my running, uneasy that others might interpret an extracurricular interest of this intensity as a softening of my devotion to the company. A kink in the corporate armament.
Yet in my heart, my devotions were indeed shifting. Completing the Western States Endurance Run had become a goal as meaningful to me as any other in my life. Never before had I been so challenged by a single pursuit. Nor had I ever been so captivated and engaged. The training continued more fervently than ever, and I continued treading the delicate line between recklessness and responsibility, never letting on how much time and effort were being poured into this single dream.”

“Badwater is the lowest point in the Western Hemisphere, smack in the middle of Death Valley, at the southeastern end of California, 282 feet below sea level. Summertime temperatures can exceed 130 degrees Fahrenheit, and the asphalt can get better than 200 degrees. Not your ideal place for a jog.
But the summer after I completed the Western States, I found myself standing at the starting line of the Badwater Ultramarathon, drenched in perspiration, shaking with anticipation, waiting for the race to begin.
Twenty-four of us were about to embark on what is called The World’s Toughest Footrace,
a 135-mile trek across Death Valley to Mount Whitney, the highest peak in the contiguous United States.
While the Western States 100-Mile Endurance Run had been grueling, Badwater is widely considered the ultimate test of endurance and human resolve. Or just plain insanity. It can go either way.”

“Even while participation in 10Ks and marathons is on the rise, 100-mile footraces remain almost unknown to the general public. The level of corporate sponsorship and media coverage of just one major U.S. marathon, like Boston or Chicago, would dwarf that of all ultra-endurance events combined. And when comparing any running event to a popular spectator sport, like football or baseball, the level of endorsements isn’t even a blip on the radar.
And I like that.
Runners are real people. They don’t run for money or recognition, they do it out of passion. Most have day jobs that pay the bills, and running is a labor of love. Ultrarunners take it to the next level. Training to run 100 miles while working nine-to-five requires a phenomenal level of commitment and determination. It’s a select breed that can withstand the tremendous physical and emotional toll that performing on such a level demands. Without discipline to rise before dawn and pound out the miles, you’ll never make it. If the fire in your heart isn’t strong, there’s no point trying.”

“A week after The Relay, a miracle occurred. Libby received her organ transplant. She had run the race of her life, and she had won.
Playing a small role in helping to save Libby was one of the most enriching accomplishments of my life. If I could use my running to benefit others, it gave new meaning to the pursuit. I wanted to do more.
I ran The Relay solo again the subsequent year, this time for a little boy named David Mehran who, like Libby, needed a liver transplant. Despite improbable odds, young David also received the gift of life a week after The Relay. I wanted to run more.”

Reviewed by Lou Pendergrast on 28 April 2019