Trouble No Man by Brian Hart 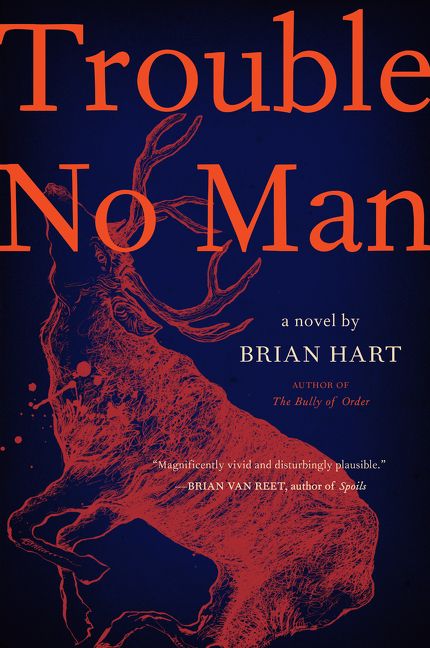 American War meets Into the Wild in Brian Hart’s epic saga of one man’s struggle to survive a hostile world—tracing his path from a self-destructive, skateboarding youth in the 90s to the near future as he journeys across a desolate, militia-controlled American West to find his missing family—perfect for fans of Edan Lepuki and Cormac McCarthy.

In the America of a near future, northern California and the Pacific Northwest have become a desolate wasteland controlled by violent separatist militias and marked by a lack of water and fuel. In a village outside Reno, a middle-aged man visits an undertaker and gathers the ashes of his dead wife to bring to Alaska. There, their children await them—refugees from the destruction of the south. To reach his only remaining family, the man must cross the treacherous, violent landscape north by bike, his dog his only companion.

Thirty years earlier, we meet Roy Bingham. After a rough-and-tumble childhood, Roy is numbing himself with skateboarding, drugs, and sex, when he meets Karen. Sassy, soulful, and arresting, Karen pulls Roy into her orbit until she decides to give up their nomadic lifestyle to put down roots in her hometown of Loyalton, California. Roy’s fidelity buckles under the commitment and after a boozy night in Reno he leaves Karen for the road and skateboarding.

Flashing back and forth in time across four decades in the life of a man who is lost even when he’s found, Trouble No Man delivers a resonant story of survival, violence, and family, set against the tumult of an America on the precipice of becoming an unfree nation.

Praise for Trouble No Man:

“Trouble No Man is a standout in dystopian fiction, a post-punk Western chronicling one man’s decline and fall amid an empire’s. Brian Hart is the rare literary talent who can move readers with a subtle knowledge of both tenderness and horror. A deeply impressive, insightful work of realism.”
– Brian Van Reet, Author of Spoils

“Luminous, brutal, and tenderhearted, Trouble No Man rewires tired and toxic cowboy tropes to build a newer, truer sort of Western.”
– Michael Christie, author of If I Fall, I Die

“Roy’s evolution from self-sabotaging youth to family man, and his journey’s achingly nostalgic tone, are a compelling counterweight to the bursts of cruelty and raw violence in his encounters with militiamen. Dystopian thrillers can be conversational gold in book-group settings, and this one offers story-driving humanity that refuses to take a back seat to the well-crafted neo-western setting.”
– Booklist

Praise for The Bully of Order:

“This crackling, lightning-bolt energy and patient attention to even the lowest of characters recalls the work of Denis Johnson… helped along by an energizing sense of humor and a virtuosic control of plot… Hart has created a Dickensian portrait of the barely settled Pacific Northwest.”
– New York Times Book Review

“Mesmerizing…. Hart has conjured a singular, searing world. When you step into this novel you submit to its dream… [and] believe in his large gift that leaves you stunned and breathless. A wonderful, unique portrait of a particular landscape I now see anew.”
– Amanda Coplin, author of The Orchardist

“Hart’s sense of place is brilliant…. There are dazzling characterizations… [and] a dense, deep and illuminating narrative… of greed and ambition and of fathers and sons…. Think the brutal realities of McCarthy’s Blood Meridian set among the primeval forests of the Pacific Northwest frontier.”
– Kirkus, starred review

Reviewed by Lou Pendergrast on 18 January 2019