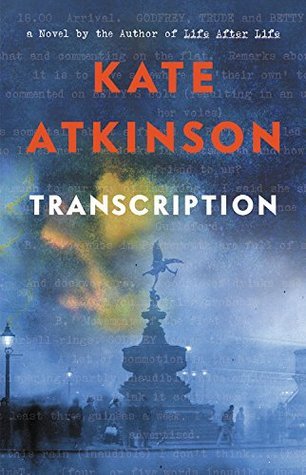 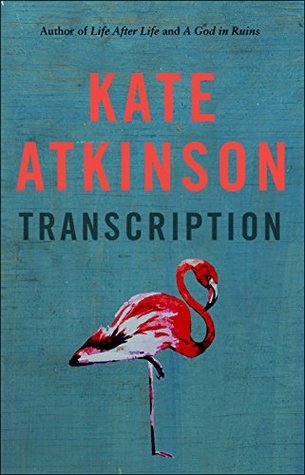 A dramatic story of WWII espionage, betrayal, and loyalty, by the #1 bestselling author of Life After Life

In 1940, eighteen-year old Juliet Armstrong is reluctantly recruited into the world of espionage. Sent to an obscure department of MI5 tasked with monitoring the comings and goings of British Fascist sympathizers, she discovers the work to be by turns both tedious and terrifying. But after the war has ended, she presumes the events of those years have been relegated to the past forever.

Ten years later, now a radio producer at the BBC, Juliet is unexpectedly confronted by figures from her past. A different war is being fought now, on a different battleground, but Juliet finds herself once more under threat. A bill of reckoning is due, and she finally begins to realize that there is no action without consequence.
Transcription is a work of rare depth and texture, a bravura modern novel of extraordinary power, wit and empathy. It is a triumphant work of fiction from one of the best writers of our time.

“There is intrigue. There are surprises. But the unknowns aren’t always what we think they are. The deepest pleasure here, though, is the author’s language. As ever, Atkinson is sharp, precise, and funny . . . Another beautifully crafted book from an author of great intelligence and empathy.”
– Kirkus

“Atkinson never fails to take us beyond an individual’s circumstances to the achingly human, often-contradictory impulses within. And, as all of Atkinson’s readers know, she is an exquisite writer of prose, using language with startling precision whether she is plumbing an inner life, describing events of appalling violence, or displaying her characters’ wonderfully acerbic wit. Evoking such different but equally memorable works as Graham Greene’s The Human Factor (1978) and Margaret Drabble’s The Middle Ground (1980), this is a wonderful novel about making choices, failing to make them, and living, with some degree of grace, the lives our choices determine for us.”
– Booklist

There will be some fake identities, deception, infiltrations, webs of deceit, war, murder, moles, espionage, and the job of transcriptions and the work of being a spy as an eighteen-year-old, Juliet Armstrong would find herself amongst, along with plenty cups of tea, and keep calm and carry on.

The author cleverly uses history and plays in part with it, as this is a fiction narrative, and in process crafting an evocative enigma of a tale, that proves to be intriguing and suspenseful reading, and a nostalgic portrait of a female agent and transcriber, Juliet Armstrong.

There are some scenes that occur in Dolphin Square, Pimlico London. This is to be the place of work for the new recruit.
There is some historical truth of MI5 there, on Wikipedia there is this,“It provided a base for the Free French during World War II and number 308 Hood House was used by MI5 section B5(b) responsible for infiltrating agents into potentially subversive groups from 1924 to 1946.[7]”
There is also an office for MI5 in this narrative in Wormwood Scrubs London, of which now serves as a prison that was in second world war actually used as office space, noted in Wikipedia also, “During the Second World War, the prison was taken over by the War Department and the prisoners were evacuated to other prisons. It was used as secure office space for the duration of hostilities, and housed MI5 and MI8.

“The mark of a good agent is when you have no idea which side they’re on.”

“Godfrey Toby is his name,’ Peregrine Gibbons said. ‘He poses as an agent of the German government, but of course he is one of us.’
It was the first time Juliet had heard the name Godfrey Toby and she said, ‘He’s not actually German then?’
‘Goodness, no. There is no one more English than Godfrey.’ But surely, Juliet thought, Peregrine Gibbons – the name alone – was the apotheosis of an Englishman. ‘No one more trustworthy either,’ he said. ‘Godfrey’s been in “deep cover” for a long time, attending Fascist meetings and so on throughout the Thirties. He had contacts with workers at Siemens before the war – their factories in England have always been hotbeds for German intelligence. He is well known to the fifth column, they feel quite safe with him. I presume you are familiar with the ins and outs of the fifth column, Miss Armstrong?’
‘Fascist sympathizers, supporters of the enemy, sir?’
‘Exactly. Subversives. The Nordic League, the Link, the Right Club, the Imperial Fascist League, and a hundred smaller factions. The people who meet with Godfrey are mostly old British Union of Fascists members – Mosley’s lot. Our own home-grown evil, I’m sorry to say. And instead of rooting them out, the plan is to let them flourish – but within a walled garden from which they cannot escape and spread their evil seed.”

“And now here they were in Pimlico, in Dolphin Square, so that he could show her the ‘set-up’. He had taken two flats next door to each other – ‘Isolation is the best form of secrecy,’ he said. ‘Mosley has a flat here. He’ll be one of our neighbours.’ This seemed to amuse him. ‘Cheek by jowl with the enemy.’
Dolphin Square was built a few years ago, close to the Thames, and until now Juliet had only seen it from the outside. Entering through the large arch on the river side it presented quite a daunting sight – ten blocks of flats, each ten storeys high, built around a kind of garden quadrangle with trees and flower beds and a winter-dry fountain. ‘Quite Soviet in its conception and execution, don’t you think?’ Perry said.
“I suppose,’ Juliet said, although she didn’t think the Russians would have named their housing towers after legendary British admirals and sea-captains – Beatty, Collingwood, Drake, and so on. They were to be in Nelson House, Perry said. He would live and work in one flat – Juliet would work there too – while in the next-door flat an MI5 officer – Godfrey Toby – would masquerade as a Nazi agent and encourage people with pro-Fascist sympathies to report to him. ‘If they’re telling Godfrey their secrets,’ Perry said, ‘then they are not telling the Germans. Godfrey will be a conduit to divert their treachery into our own reservoir.’ Metaphor really wasn’t his forte.
‘And one will lead us to another, and so on,’ he continued. ‘The beauty of it is that they are doing the rounding-up themselves.”

“It had seemed like an attractive prospect. She had been working in a prison for the last couple of months – MI5 had relocated to Wormwood Scrubs so as best to accommodate their burgeoning ranks, necessitated by war. It was an unpleasant place to work. All day long, people clattered up and down the open metal staircases. The female staff had even been given special dispensation to wear trousers because the men could see up their skirts when they were going up the stairs. And the Ladies were not ladies’ toilets at all but horrid things designed for prisoners, with stable-type doors that left you completely visible from the bust upwards and the knees downward. The cells functioned as their offices and people were forever getting locked in by accident.
Pimlico had seemed an attractive proposition in comparison. And yet. All this talk of isolation and secrecy – was she to be locked away here too?”

“The Scrubs, as everyone called it, was chaotic, full of people totally unsuited to the job in hand. MI5 were recruiting an enormous number of new people, girls mostly, into ‘A’ Division, which was administrative.”

“The sun was flooding into the upstairs drawing room in Pelham Place although the weather remained chill. In the street below, the trees were beginning to display their fresh young leaves. It was such a hopeful time of year and yet Denmark had just surrendered and the Germans had taken Oslo and set up a government under Quisling. Poland, Norway, Denmark – Hitler was collecting countries like stamps. How long before he had the full set?
The future was coming nearer, one relentless goose-step after the next. Juliet could still remember when Hitler had seemed like a harmless clown. No one was amused now.”

Reviewed by Lou Pendergrast on 30 September 2018