Book Review: This Side of Night by J. Todd Scott - More2Read

This Side of Night by J. Todd Scott 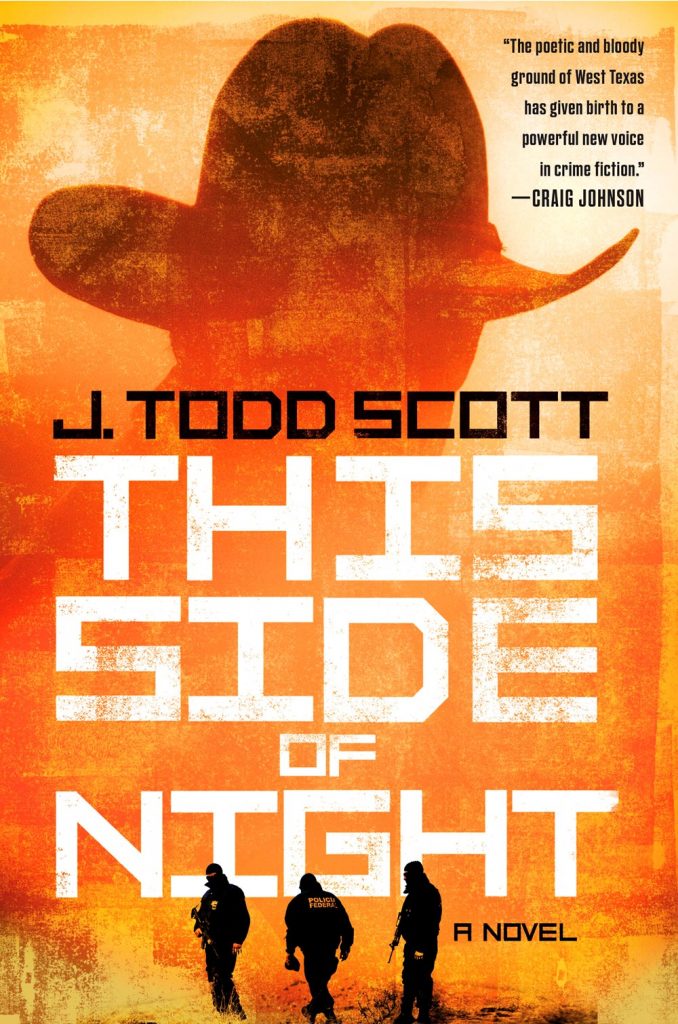 The vicious Mexican cartel war boils over into the Big Bend in the explosive new novel from the author of The Far Empty and High White Sun.

In the Mexican borderlands, a busload of student protesters is gunned down in broad daylight, a violent act blamed on the Nemesio cartel. But its aging leader, Fox Uno, sees the attack for what it is: another salvo in the long-running battle for control of Nemesio itself; perhaps by a rival cartel, or maybe someone closer to home…

Across the Rio Grande, Sheriff Chris Cherry and his deputies America Reynosa and Danny Ford find themselves caught in Fox Uno’s escalating war with the recent discovery of five dead men at the river’s edge. But when El Paso DEA agent Joe Garrison’s own Nemesio investigation leads him into the heart of the Big Bend, he’s not ready to accept the cartel leader’s retreat or defeat. Not only does he suspect a high-profile drug task force in a neighboring county is corrupt, he can’t shake lingering doubts about the loyalty and motives of the young deputy, Ame Reynosa. And he won’t let Sheriff Cherry ignore them either.

In this pitiless land it’s kill or be killed, where everyone will make one final bloody stand to decide the fate of Nemesio, the law in the Big Bend, and most of all, the future of America Reynosa.

Praise for This Side of Night:

“The author exploits his decades of experience as a federal agent to create a powerful, realistic picture of crime along the southern border. Thriller fans will enjoy this absorbing and disturbing book.”
—Kirkus Reviews

“The stellar third volume in Scott’s epic Texas border series (after 2018’s High White Sun) draws its inspiration from a real-life tragedy…Scott, a veteran federal agent, writes with authority and gravitas about complex border issues. Fans of Don Winslow and Cormac McCarthy won’t want to miss this one.”
—Publishers Weekly

“Scott writes beautifully, dreaming up intriguing action scenes, which those who are focused only on thrills will wish kept going and going. But patient readers will recognize and appreciate Scott’s end game: showing us a world where thieves, murderers, and sadists are everyday folk.”
—Booklist

“Ojos de los muertos.
The night had come alive to swallow them whole and make them disappear.”

“Drug and human trafficking on the Texas-Mexico border was a violent and bloody business, but also a very lucrative one, and right now, business was not good for anyone.”

“There isn’t any real right or wrong here, only what you have to do.”

There are the dead teenagers and the missing on one side of the border, whilst there is a Sheriff election in the backdrop of this tale on another, with the force of the sicarios and one cartel leader running though this tales core affecting all they touch with other corrupt men in uniform, Fox Uno, leader of Nemesio cartel, a mass murderer who calls himself death, the corrupt and the good in the balance.
It is all happening at the Big bend the Far Six, zeroing down to a cinematic showdown affair in one of the best I have read for a while upon the page having me recalling film scenes from No Country For Old Men and Sicario.

Both sides of the border, lives affected by crimes and violence, fiction telling but some truth work in fiction framework with his “DEA craft” coming from a voice that has lived the terrain, breathed the air and felt the corrupted lives during his years as DEA agent.
This is no easy fete this writing of complex histories and territories, he succeeded in doing what he says his desired to communicate in my interview with him he said:

“I wanted to go south for the first time in the series and draw a little attention to the complexities many families face that straddle both sides of the border. America is bound by blood to a significant cartel figure, and as much as she’d tried to escape that legacy, it’s haunted her through the series to date. Having worked drug and cartel cases as long as I have on the border and the Southwest, I wanted to bring more of that real-life experience to bear than I have in any of the previous books. This story has more DEA craft than all the others combined.”

I have missed some histories of the Big Bend so would be good to go back and start with the first book with the Far Empty and the beginnings of Sheriff Chris Cherry.

There is the best and worst of men in this west Texas border noir, many mechanisms set in motion with a wheel of violence at work with the evil that men do, in the uniform of the law and outside the law, the victims, the revenge and vengeance, a long cycle of history of violence with unfinished dirty deeds in proximity of the Border.
A gripping tale of two sides of the border with ill will spreading and drugs corrupting, courage and strength found with heroes born, killers put to rest, and men transitioning to quieter lives.

“It was vida everywhere, all around him. But as much as he liked it here, he could only spend two or three days at the most, sometimes less, because of the americanos. Las Tres Letras . . . DEA. He could never stay anywhere for long. His life had become disposable, cast away, everything in it ready to be thrown out or discarded at a moment’s notice. He used a cell phone two times and it was replaced with another; fresh laptops and satellite phones were always appearing out of plastic and Styrofoam; new cars and stolen and repainted trucks came and went by the score, changing or disappearing as frequently as the men who drove them and protected him. No longer was he with the same woman twice. No one could know too much, or get too close, except for Gualterio. Not even Martino, who chose to stay away anyway. This was his life now: all these things he could have, yet everything slipping almost untouched through his fingers.
The lyrics of a narcocorrido once boasted that Juan Abrego Carrión owned the world, but that was far from true.
He could buy the world, but he could own nothing.
No longer.
He wanted to stand outside the barn door for a moment more, gather himself for what would come next, but it was never good to be outside, uncovered, for long. Martino, who had studied two years at a university in California, had talked to him of satellites and drones and all the things the americanos were using nowadays to hunt him. No, he truly did not own the world. It owned him, and even the sky held him prisoner.”

“Juan Abrego knew terror intimately, knew the very curves and contours of it as well as he knew those of any woman he’d ever had, so he stood in front of the bound man for a long minute, watching him. Watching him breathe faster and faster and then piss himself as the terror took hold.”

“He could point to visible improvements around the jail and around the department itself. He’d implemented new policies and practices that had brought the Big Bend County Sheriff’s Department in line with modern and, Chris hoped, more ethical policing. He’d trained and equipped his deputies better, hiring good people to be those deputies: America, Danny, and the new kid, Marco.
He’d expanded the department’s outreach to the Hispanic community.
These were all things he was proud of, but were they enough?
Did they matter?” 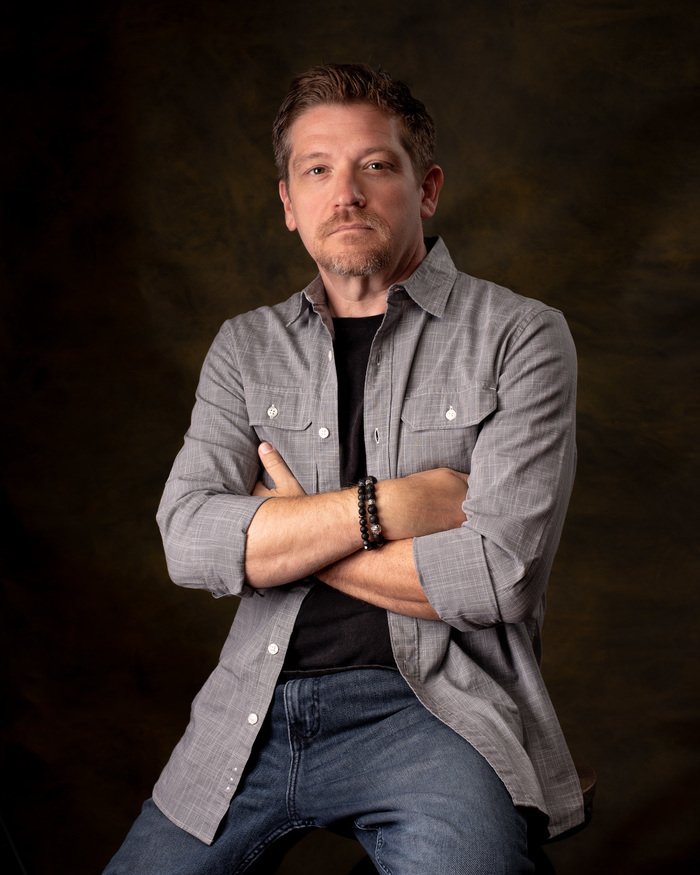 J. Todd Scott was born in rural Kentucky and attended college and law school in Virginia, where he set aside an early ambition to write to pursue a career as a federal agent. His assignments have taken him all over the U.S and the world, but a badge and gun never replaced his passion for books and writing. He now resides in the American Southwest, and when he’s not hunting down very bad men, he’s hard at work on his next book.