The Whisperer by Donato Carrisi 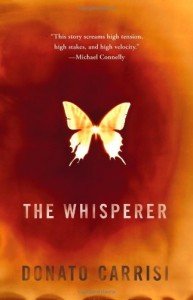 Synopsis
A gripping literary thriller and smash bestseller that has taken Italy, France, Germany and the UK by storm.

The severed arms of five girls who vanished in broad daylight are discovered buried in a clearing in the woods. Alive or dead, the remainder of the girls’ bodies are nowhere to be found. Worse still, there is a sixth, yet to be identified.

At first, the case seems simple. A series of clues leads investigators Mila Vasquez, a celebrated profiler with an attitude problem who is an expert in crimes relating to children, and Goran Gavila, the eerily prescient criminologist who sees deeper into Mila’s dark past than any man has before, to a twisted killer. But when they begin to follow the leads for the second missing child, it points in a vastly different direction.

Vasquez and Gavila begin to wonder if they’ve been brought in to take the fall in a near-hopeless case. Is it all coincidence? Copycats? Or, is there a mastermind of evil behind the killings? And if so, from where is he conducting his symphony of murder?

Obsessed with a case that becomes more tangled and intense as they unravel the layers of evil, Gavila and Vasquez find that their lives are increasingly in each other’s hands….

THE WHISPERER, as sensational a bestseller in Europe as the Stieg Larsson novels, is that rare creation: a thought-provoking, intelligent thriller that is also utterly unputdownable.

“Stations .
It’s strange, thought Mila. While for the rest of the world they’re only a place you pass through, for some they’re a terminus. They stop there and they don’t leave again. Stations are a kind of ante-hell, where lost souls congregate in the hope that someone will come and collect them.
An average of twenty to twenty-five individuals disappear every day. Mila knew the statistic very well. All of a sudden these people vanish without warning, without a suitcase. As if they had dissolved into nothing.”

“But you’re not the only one who can get into people’s minds…Lately I’ve learned a lot about serial killers. I’ve learned that they’re divided into four categories: visionaries, missionaries, hedonists and power seekers…But there’s a fifth kind: they’re called subliminal killers.”

My Review
The synopsis covers well what the story is about so there is no need for me to fill you in.
Basically missing girls 6 and found arms 5. The search for the killer is on and the whole uncovering of a pedophile network and using sixth sense to track the killer adds an edge to the story. This is a debut novel so you have to give the author the credit for capturing worldwide attention. The translation I do feel in this instance loses the writing prose. There are good sections of writing and other sections that don’t quite match the flow of the story. If the story was tighter and had a faster motion of events it would have been a more better read..
There is a mention of a prisoner with strange behavioral patterns and that a few killers could be involved. The silence of the lambs link some readers have mentioned could have stemmed from that set up of the story, though the writing is not in the same quality as Thomas Harris.
There is a hook here that keeps you reading, due to the want of the identity of the perpetrator.

Reviewed by Lou Pendergrast on 20 January 2012