The Skeleton Melodies by Clint Smith 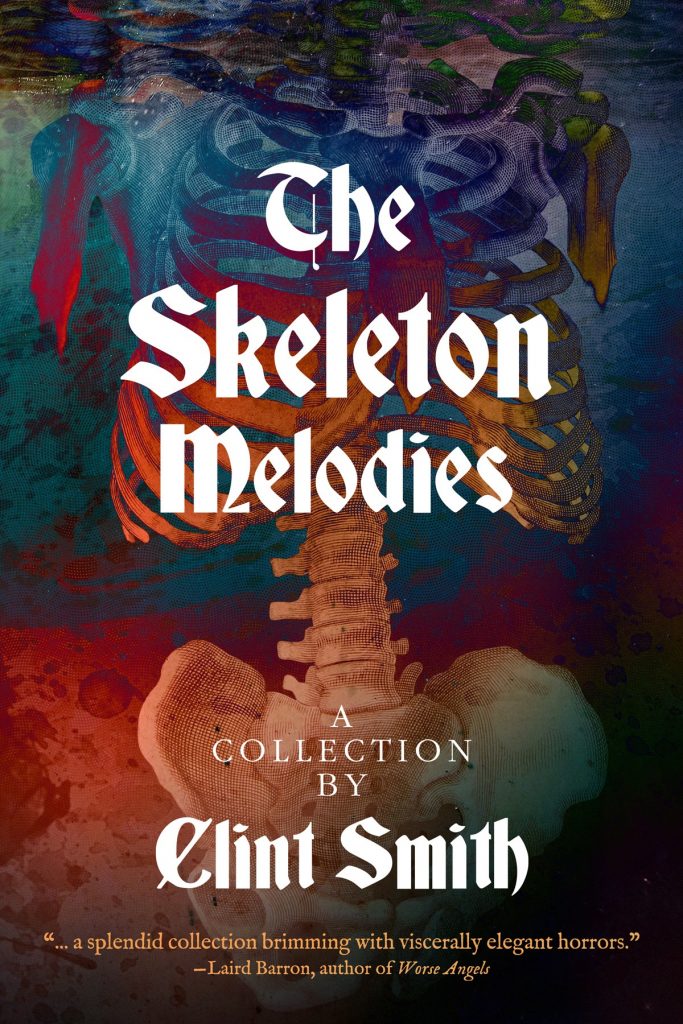 About The Skeleton Melodies

In 2014, Hippocampus Press published Clint Smith’s first short story collection, Ghouljaw and Other Stories. Now, Smith has assembled his second story collection, and it features all the virtues of his first book while adding new touches that will broaden his readership.

The Skeleton Melodies features such stories as “Lisa’s Pieces,” a grisly tale of cruelty and murder; “Fiending Apophenia,” in which a schoolteacher reflects poignantly on his past derelictions; “The Fall of Tomlinson Hall,” wherein Smith draws upon his own expertise in the culinary arts to fashion a story of cannibalistic terror; and “The Rive,” a highly timely post-apocalyptic account of the horrors that inequities in health care can foster.

Other stories treat of domestic strife leading to supernatural or psychological horror, such as “Animalhouse” or “The Undertow, and They That Dwell Therein.” The volume culminates in the richly textured novella “Haunt Me Still,” one of the most subtle and powerful ghost stories in recent years.

Praise For The Skeleton Melodies

“Smith is a real find, an elegant stylist with an imagination that’s unsettling, paranoid, gruesomely funny at times, and startlingly original. He’s written one of the scariest sex scenes I’ve ever read, but he can even make vacuuming your own house seem scary.”
-T.E.D. Klein, author of Providence after Dark and Other Writings

“In his compelling sophomore collection, Clint Smith dives deep into his characters’ psyches, unearthing the histories, the mysteries driving them toward horrors visceral and cosmic. His stories make reference to the work of John Cheever, of George Orwell, and his fiction displays the same attention to style, to grace and elegance of expression, which distinguishes the writing of those writers. In Smith’s work, carefully rendered portraits of daily existence open into the weird and terrifying. There are images of body horror in these pages that would not be out of place in the early films of David Cronenberg, and there are evocations of vistas immense as any in the work of Machen and Klein. With these stories, Smith solidifies and extends the gains made in his first collection, and leaves us eager for another.”
-John Langan, author of Sefira and Other Betrayals

“Smith’s affect is a pendulum that swings from the classical and the mannered into his own vision of contemporary darkness; a darkness that conceals all sorts of hazards. The Skeleton Melodies is a splendid collection brimming with viscerally elegant horrors.”
-Laird Barron, author of Worse Angels

Reviews will be added through first few weeks of April had to try first two to start with and wasn’t disappointed.

There is a displaying of ones own style of writing, a voice, a prose style describing things with keen lyrical symmetry.
A little horror of a weird tale of ancient and modern aspects fused with lyrical precision of a surgeon.
There is for an author plenty words to fill and stray from the meat of the tale and this one does not that, the right balance to drive the reader forward and fine details evoking the past and present, and monstrous actions contained within.

“Colin looked practically the same, his features sustained. Older, more mature, sure—his skin in sequence with his age. He’d taken to slicking back his black hair. And while Colin (so far as Lew knew) had never played a sport in his life, he maintained the sinewy build of a swimmer or rower—the aesthete of the elite.”

“A gray, mottled punch of light emerges in pitch, lending some sense of dimension, direction. The perturbating glow swells as decades shift, deteriorate and coalesce into mere seconds . . .”

“Colin’s true nature. Even the phrase had never occurred to Lew back then. It had been simpler, more innocent than that. Colin had been his friend. His only friend.

It was a mundane, mid-teen scenario. Still, it served as the fulcrum of their divergent, brotherly bifurcation. There had been five of them: Lew (clumsy), Colin (clever), Lisa (sophisticated), Monica (the infidel), and Heather (the mouse). They’d been friends since elementary school, insulating one another as they progressed through the unforgiving social strata of middle school and high school—the four of them a pentagram of pubescent protection. Though Colin and Lisa were the only two who’d developed a romantic relationship.”

The Undertow, and They That Dwell Therein

Pitting family against terrors, with loss, dream interpretation and beliefs in the unraveling story along with certain truths to be unveiled.

Whilst the news on the TV in the hotel room is scaring her kids the main character mentions one story by Flannery O’Connor, one of my favourites, where avoiding is not an option and a similitude struck on the thought of avoiding killers.

Reads like a Flannery O’Connor and John Cheever tragedy with a horror mutation.

“Gwen struggled from slumber—her eyelids fluttering, finally parting to take in the early morning murk, the bleed edging the curtains and touching the sand-colored walls. A hotel room, she told herself. Tennessee, she refined as she bobbed to the surface of lucidity.

Still not summoning the urge to budge, she took visual inventory: Abbi, her small, cotton-clad form breathing gently, her dark hair spilled on the pillow; and over on the pull-out bed, the larger, haphazard sprawl of her twelve-year-old son, the boy’s snore nearly blending with the phlegmy din of the room’s A/C unit. That snore had a signature, yet another inherited trait from his father that delicately irritated Gwen.”

“Coping with the kids, even in this single-mom gig, was easier than the days of frigid tension between her and Sean. Sure: the accountability was exhausting, but she’d gotten used to the rhythms of responsibility associated with unilateral parenting over the past five years.”

“It was just out of the inelegant and ill-shaped accretion that was their relationship and eventual marriage: they’d successfully collaborated on two children, while also collaborating on whittling down their alliance to one sharp point: Sean had simply grown weary of . . . well, everything: being a husband, being a mortgage-toiler, being a father. It was the birth of Abbi, Gwen was certain, that had put the finishing touches on it all.”

“Gwen knew from personal experience: in times of crisis, people needed self-soothing testaments—remnants, in her mother’s case, of those unflinching, ecclesiastical fundamentals from childhood.”

“Though she did not physically react, there was part of Gwen that bristled: yes, at the innocence of the words themselves, but also at the affectation of magical thinking. She was not necessarily surprised by this, yet found herself needing something else—something more realistically sound than self-centered promises of the afterlife. Despite this, she still sought to soothe her mother.

And it was during moments like this, intimate moments where their wavelengths might have a chance to overlap—as mothers, as daughters, as women—that she felt most susceptible to her mother’s credulousness, as though her mother’s beliefs were working on her, a sort of fundamental infection. But she knew all too well that, when it came to her stubborn mother, there would be no reciprocity, no hope for philosophical cross-pollination.”

Clint Smith is the author of the collection GHOULJAW AND OTHER STORIES (Hippocampus Press, 2014), and the novella, WHEN IT’S TIME FOR DEAD THINGS TO DIE (Unnerving Press, 2019). His sophomore collection, THE SKELETON MELODIES, is is now available from Hippocampus Press.

Of late, his story, “Behemoth,” can be found in the Scott Dwyer anthology, PLUTO IN FURS.

A former freelance writer, Clint’s non-fiction stories and columns have previously appeared in FARM Indiana Magazine, SOUTH Magazine, the Southside Times, and the Indianapolis Star. Readers can follow him on Twitter @clintsmithtales; or read more at clintsmithfiction.com.

Clint lives in Indiana, along with his wife and children, just outside Deacon’s Creek. 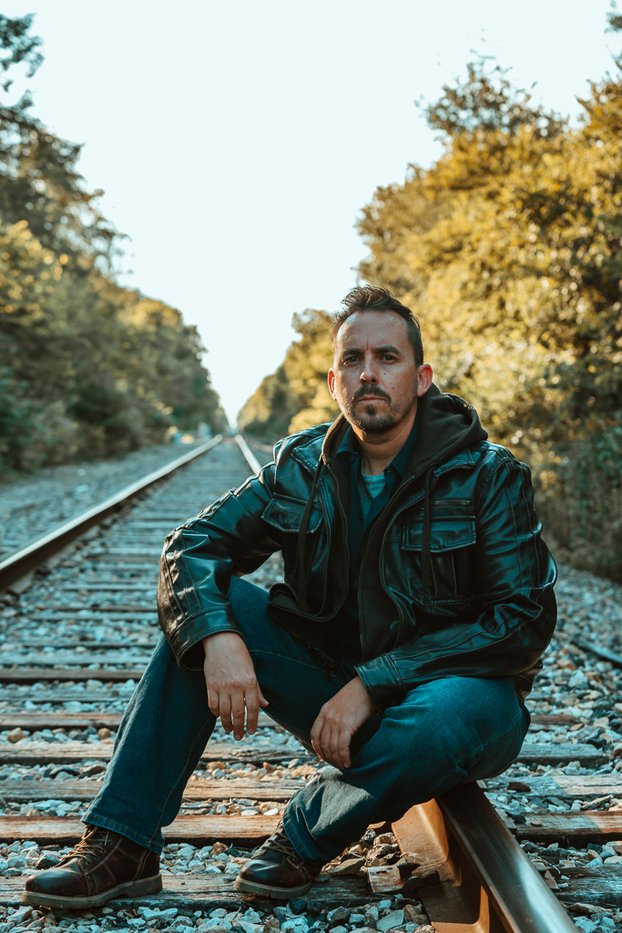 Reviewed by Lou Pendergrast on 03 April 2021