The Skeleton Box: A Starvation Lake Mystery by Bryan Gruley 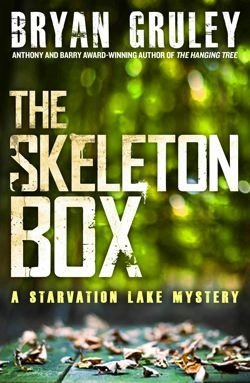 Anthony and Barry Award-winning author Bryan Gruley returns with the third novel in his critically acclaimed Starvation Lake mystery series.A series of mysterious break-ins is plaguing the small town of Starvation Lake. Someone is slipping into the homes of elderly people when they’re out playing Bingo. Oddly, the intruders take nothing, despite evidence that they rifle through personal files.     Worry turns to panic when a break-in leads to the death of a beloved citizen. Phyllis Bontrager is found dead in the home of her best friend, Bea Carpenter, mother of Gus Carpenter. Bea, suffering from worsening dementia and under the influence of sleeping pills, remembers little of the break-in. Her son, editor of the local newspaper, must pursue a terrible story: the death of a woman he has known all his life, who also happens to be the mother of his ex-girlfriend, Darlene.      With the help of Luke Whistler, an ex-Detroit Free Press reporter who came north looking for slower days and some old-fashioned newspaper work, Gus sets out to uncover the truth behind Mrs. B’s death and the “Bingo Night Break-Ins.” What he doesn’t know is that Whistler has his own agenda, and the secrets he’s determined to unearth—involving the long-ago killing of a nun—could forever change Gus’s perceptions about Starvation Lake and even his own family.

In a quiet town called starvation lake there are no murderers. Well thats what they thought. A series of burglaries during bingo nights started occurring in Starvation lake. They were attended mostly by the elder folk of the community, one turns ugly with a murder.

Past murders become revisited with question marks on the guilty.
Secrets that others want buried come to the surface and up in the communities faces.
One old soul believes the truth will not set you free.
Suspects some laughable and have nothing to do with burglaries or murder are brought in. With a community who has not dealt with murderer recently you only hope Starvation lake learns from this crime and secret.

Some people of the town tried to forget the break in that had left one of their own dead. They would channel their fear and confusion into cheering for the boys taking their first step toward the towns first state title.

I enjoyed this little town mystery. You find yourself really involved in the search for truth.
The story wraps up quite neatly with a great scene of unveiling of truths and closure of the mystery in Starvation Lake and what lies in a box others prefer lost forever.

I have been meaning to read this authors debut novel ‘Starvation Lake’ for quite a while but never got to doing it, i hope to this year some time.