The Revisionists by Thomas Mullen

Buy from Amazon.co.uk or Amazon.com The Revisionists

Would you kill to make the world a peaceful place?

Zed is an agent from the future. A place where all of the world’s problems have been solved. No hunger. No war. No despair.

His mission is to keep that way. Even if it means ensuring every cataclysm throughout history runs its course, especially one just on the horizon.

Zed’s mission will ensnare the lives of a disgraced former spy named Leo; a young lawyer, Tasha, grieving over the loss of her brother; Sari, the oppressed employee of a foreign diplomat; and countless others. But will he finish his final mission before the present takes precedence over a perfect future? One that may have more cracks than he realizes?

The Revisionists is a literary tale of action and intrigue that puts a fresh spin on today’s global crises, asking questions about the nature of history and the future, and our own roles in shaping them.

MY REVIEW
Within these pages you will find a complex cerebral thriller. A thriller post 9/11 and a government where agents hunt down and kill those that plot to unbalance the peace. A world of espionage, secrets and cover ups. Don’t expect a visceral thriller, from the title and book cover I was expecting more of a cinematic kind of thriller instead it turned out to be a thinking mans tale of truth and power. You have a couple of searches for truth here, one a dead brother in the army and secondly a diplomat while is in the midst of deals with a foreign enemy, his maid has been the recipient of some abuse. It is a long haul to read and at times wanted a bit more accelerated pace, in the end I would say I found it was crafted together quite cleverly. 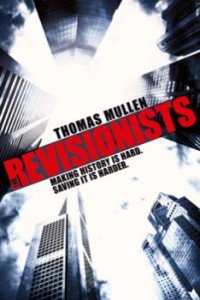 Reviewed by Lou Pendergrast on 05 October 2011