The Revenant by Michael Punke

The Revenant by Michael Punke 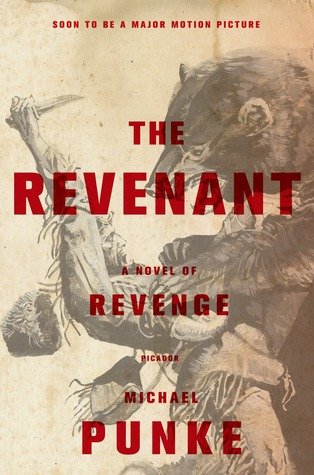 A thrilling tale of betrayal and revenge set against the nineteenth-century American frontier, the astonishing story of real-life trapper and frontiersman Hugh Glass

The year is 1823, and the trappers of the Rocky Mountain Fur Company live a brutal frontier life. Hugh Glass is among the company’s finest men, an experienced frontiersman and an expert tracker. But when a scouting mission puts him face-to-face with a grizzly bear, he is viciously mauled and not expected to survive. Two company men are dispatched to stay behind and tend to Glass before he dies. When the men abandon him instead, Glass is driven to survive by one desire: revenge. With shocking grit and determination, Glass sets out, crawling at first, across hundreds of miles of uncharted American frontier. Based on a true story, The Revenant is a remarkable tale of obsession, the human will stretched to its limits, and the lengths that one man will go to for retribution.

Praise for The Revenant:

“The makings of a western classic, Michael Punke’s novel The Revenant provides muscle and sinew to the vengeful and epic tale of mountain man, Hugh Glass that even a sow Grizzly couldn’t rend asunder.”
–Craig Johnson, author of the Walt Longmire novels

“A superb revenge story . . . Punke has added considerably to our understanding of human endurance and of the men who pushed west in the footsteps of Lewis and Clark–a significant feat.”
–The Washington Post Book World

“A captivating tale of a singular individual . . . Authenticity is exactly what The Revenant provides, in abundance.”
–The Denver Post

“One of the great tales of the nineteenth-century West.”
–The Salt Lake Tribune

“A gripping and hard-edged tale of survival, revenge, and, ultimately, redemption….Loosely based on true events, Glass’s harrowing journey will keep readers engaged throughout. A must-read for fans of Westerns and frontier fiction and recommended for anyone interested in stories that test the limit of how much the human body and spirit can endure.”
–Library Journal

“To enterprising young men. The subscriber wishes to engage one hundred young men to ascend the Missouri river to its source, there to be employed for one, two, or three years. For particulars enquire of Captain Henry, near the lead mines in the country of Washington, who will ascend with, and command, the party.”

After the bear attack, it was asked for two men to stay behind with the dying man Glass, for a some of money they were to give him a burial then catch up with the group out seeking Fur. One man of the two, Fitzgerald, had a history of violence and gambling. Bridger, the other, had a dream to travel and see the mountains and wilderness.
What was not carried out as agreed inevitably lead to one mans quest and vow for revenge and justice, these factors drove him with sheer bravery and courage to basically crawl across the wilderness crossing paths with all manner of beasts, snakes, wolves and men. What they had done was rob him of his few prized possession in particular, The Angstadt, his rifle.

This historical tale has truth in it as a man of this name Hugh Gass, the main protagonist of this tale, did exist and was attacked by a grizzly and mauled and then left by two men to tend for himself and then was set upon a quest for revenge.
The encounters with different characters of nature, encounters with different tongues and ways of men, encounters with the wilderness and the Bear, and being left for dead crawling for survival all come alive on the page with sentences evoking a great sense of place and action, with memorable crafted characters and a great hook in the narrative to the question of the survival of Hugh Gass, and to the finality of his revenge.

A must read tale for 2015.
This tale will also be played out in a film adaption starring Leanardo DI cAprio.

“Fitzgerald grew up in New Orleans, the son of a Scottish sailor and a Cajun merchant’s daughter. His father put in port once a year during the ten years of marriage before his ship went down in the Caribbean. On each call to New Orleans he left his fertile wife with the seed of a new addition to the family. Three months after learning of her husband’s death, Fitzgerald’s mother married the elderly owner of a sundry shop, an action she viewed as essential to support her family. Her pragmatic decision served most of her children well. Eight survived to adulthood. The two eldest sons took over the sundry shop when the old man died. Most of the other boys found honest work and the girls married respectably. John got lost somewhere in the middle. From an early age, Fitzgerald demonstrated both a reflex toward and a skill for engaging in violence. He was quick to resolve disputes with a punch or a kick, and was thrown out of school at the age of ten for stabbing a classmate in the leg with a pencil. Fitzgerald had no interest in the hard labor of following his father to sea, but he mixed eagerly in the seedy chaos of a port town. His fighting skills were tested and honed on the docks where he spent his teenage days. At seventeen, a boatman slashed his face in a barroom brawl. The incident left him with a fishhook scar and a new respect for cutlery. He became fascinated with knives, acquiring a collection of daggers and scalpers in a wide range of sizes and shapes.”

“Yet it wasn’t the Mississippi River that captured Jim Bridger’s imagination—it was the Missouri. A mere six miles from his ferry the two great rivers joined as one, the wild waters of the frontier pouring into the bromide current of the everyday. It was the confluence of old and new, known and unknown, civilization and wilderness. Bridger lived for the rare moments when the fur traders and voyageurs tied their sleek Mackinaws at the ferry landing, sometimes even camping for the night. He marveled at their tales of savage Indians, teeming game, forever plains, and soaring mountains. The frontier for Bridger became an aching presence that he could feel, but could not define, a magnetic force pulling him inexorably toward something that he had heard about, but never seen. A preacher on a swaybacked mule rode Bridger’s ferry one day. He asked Bridger if he knew God’s mission for him in life. Without pause Bridger answered, “Go to the Rockies.” The preacher was elated, urging the boy to consider missionary work with the savages. Bridger had no interest in bringing Jesus to the Indians, but the conversation stuck with him. The boy came to believe that going west was more than just a fancy for someplace new. He came to see it as a part of his soul, a missing piece that could only be made whole on some far-off mountain or plain.”

“I have to get warm. It took all his strength to lift his head. The blanket lay about twenty feet away. He rolled from his side to his stomach, maneuvering his left arm out in front of his body. Glass bent his left leg, then straightened it to push. Between his one good arm and his one good leg, he push-dragged himself across the clearing. The twenty feet felt like twenty miles, and three times he stopped to rest. Each breath drew like a rasp through his throat, and he felt again the dull throbbing in his cleaved back. He stretched to grab the blanket when it came within reach. He pulled it around his shoulders, embracing the weighty warmth of the Hudson Bay wool. Then he passed out. Through the long morning, Glass’s body fought against the infection of his wounds. He slipped between consciousness, unconsciousness, and a confusing state in between, aware of his surroundings like random pages of a book, scattered glimpses of a story with no continuity to bind them. When conscious, he wished desperately to sleep again, if only to gain respite from the pain. Yet each interlude of sleep came with a haunting precursor—the terrifying thought that he might never wake again. Is this what it’s like to die?”

“The collected Pawnee tribe stood in front of him, openmouthed in shock. Glass’s entire face was blood red, as if his skin had been stripped away. The whites of his eyes caught the light of the fire and shone like a fall moon. Most of the Indians had never seen a white man, so his full beard added to the impression of a demonic animal. Glass slapped one of the braves with his open hand, leaving a vermillion hand print etched on his chest. The tribe let out a collective gasp.”