The Return Man by V.M. Zito 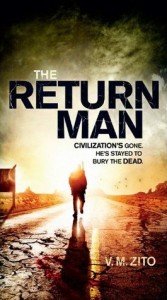 The outbreak tore the USA in two. The east remains a safe haven. The west has become a ravaged wilderness, known by survivors as the Evacuated States. It is here that Henry Marco makes his living. Hired by grieving relatives, he tracks down the dead and delivers peace.

Now Homeland Security wants Marco for a mission unlike any other. He must return to California, where the apocalypse began. Where a secret is hidden. And where his own tragic past waits to punish him again.

But in the wastelands of America, you never know who – or what – is watching you.

Before the Resurrection they all had normal lives and families, when all went to the undead their roles and priorities changed. One man Marco, changed completely, once a renowned Doctor hes now a hired Hitman to execute the undead. Returns them, for their families, back to dead as they should not be walking the earth undead. It is a task that requires emotional detachment and one that Marco the marksman has developed on. There are many things he had left behind one being his wife, four years now and no trace of her, she is possibly another lost to the undead.
Some big power pushers want Marco on the trail of an old buddy to recover him and some needed information on The Resurrection, the outbreak. The buddy is Roger Ballard a genius, a preeminent research neurologist and encephalopathologist.
There’s also another man that joins Marco, his name is Wu a trained assassin of the living not one known to kill the undead, a military agent. These two are about to face the most undead that they have ever had to face and try to come through alive with the locating and delivering of the vital important information. He must consider that in the wrong hands it could doom the whole earth.

The story was written well and the writer really gets you into the psyche of the characters and the loneliness they face, you feel the death they partake in and are surrounded with and walk their walk on the Grimm earth, he places you in the thick of the battle in the search of Roger Ballard.

Reviewed by Lou Pendergrast on 29 March 2012