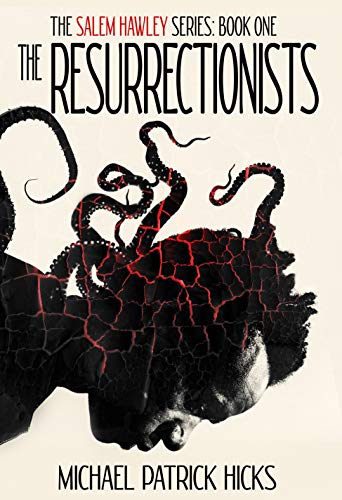 Having won his emancipation after fighting on the side of the colonies during the American Revolution, Salem Hawley is a free man. Only a handful of years after the end of British rule, Hawley finds himself drawn into a new war unlike anything he has ever seen.

New York City is on the cusp of a new revolution as the science of medicine advances, but procuring bodies for study is still illegal. Bands of resurrectionists are stealing corpses from New York cemeteries, and women of the night are disappearing from the streets, only to meet grisly ends elsewhere.

After a friend’s family is robbed from their graves, Hawley is compelled to fight back against the wave of exhumations plaguing the Black cemetery. Little does he know, the theft of bodies is key to far darker arts being performed by the resurrectionists. If successful, the work of these occultists could spell the end of the fledgling American Experiment… and the world itself.??

The Resurrectionists, the first book in the Salem Hawley series, is a novella of historical cosmic horror from the author of Broken Shells and Mass Hysteria.

Praise for The Resurrectionists:

“The Resurrectionists is a stunning achievement ? an effective historical novel AND a brutal horror story. Salem Hawley is a fantastic protagonist I look forward to following in future stores.”
– John Hornor Jacobs, author of The Sea Dreams It Is the Sky: A Novella of Cosmic Horror

“Gritty, grand and grotesque, The Resurrectionists is a mind-bending, Lovecraftian myth set in the murky underbelly of post-Revolutionary War Manhattan. It played out in my imagination in a palette of reds and browns like a lush Hammer horror film. Salem Hawley is a riveting avenger, and I’m eager to follow him on further macabre adventures.”
– Chris Sorensen, author of The Nightmare Room

“As terrifying and action-packed as a slasher flick, but also saturated with literary merit at its core, exploring social issues like racism, classism, and the ramifications of medical experimentation. It was such a fun, provocative read. I can’t wait to see what direction he steers the plot in the second book.”
– Jeremy Hepler, Bram Stoker Award-nominated author of The Boulevard Monster

“A perfect blend of historical and cosmic horror. Hicks has definitely created something special here, simultaneously authentic and otherworldly. Great characterization, vivid descriptions, and a cast of villains that will make your skin crawl.”
– Tim Meyer, author of The Switch House

“A gritty, grisly historical fiction with poetic prose and plenty of heart and guts. A mesmerizing, cosmic horror tale channeling elements of Lovecraft and Chambers with a dash of Poe. I can’t wait for the next chapter!”
– Chuck Buda, author of Tourniquet

“Grim, perverse, and written with literary panache, The Resurrectionists sets the bar high for modern authors of Lovecraftian horror. With its mix of Lovecraftian and human monsters, this opening chapter in the Salem Hawley series will delight readers of both cosmic horror and the morbidly beautiful works of Clive Barker.”
– Glen Krisch, author of Where Darkness Dwells

“A deliciously evil blend of Lovecraft, Martyrs, Frankenstein and Grand-Guignol madness. The concept is bonkers and the gore is unrelenting and off the wall. A hell of a way to kick off what will be a killer series.”
– Hunter Shea, author of Antarctic Ice Beasts

“With echoes of LaValle’s The Ballad of Black Tom, Michael Patrick Hicks’s The Resurrectionists conjures a unique and horrifying vision from the void beyond. I can’t wait to see where the series goes next.”
– Todd Keisling, author of The Final Reconciliation and Ugly Little Things

“An intriguing tale of cosmic horror and grave robbing… a very entertaining read and deserves to bring the fiction of Michael Patrick Hicks to a wider audience.”
– Ginger Nuts of Horror

“I could nearly smell the blood and feel the tentacles reaching for me from the void. The Resurrectionists is a great story on its own, but also serves as a stellar introduction to a series that makes this ‘series shy’ reader excited for what’s to come.”
– Biblioculus

“One of the best Lovecraftian books I’ve read in quite some time. Fans of the sub-genre should find this book right up their alley… Michael Patrick Hicks captures the sense of helplessness, dread, and the smallness of Man in the universe very well.”
– Real Dead Reviews

There will be continued within this book: beak-masked surgeons, grave robbers, evisceration, plague cultists, black magic, monsters, the mystical, otherworldly Old Ones, believing “Suffering is always the key,” and experimentation, with the days of old and prejudices of old.

Opens with scene of horror with the strange, a beaked mask man removing a heart, that may have you hooked in the tale.
“A slender man draped in a thick, waxed overcoat stood over her, his hands gloved in shiny black leather to match the coat. His face was hidden behind a large-beaked mask.”

Storytelling reminiscent of the likes of author Robert McCammon.
Find yourself transported to terrible times and minds with immersive storytelling in the cosmic horror realm.
Reader left eagerly awaiting the continuation of this interlude into heart of darkness.

“From The Daily Advertiser:
We have been in a state of great tumult for a day or two past. The causes of which, as well as I can digest from various accounts, are as follows: The young students of physic have, for some time past, been loudly complained of for their very frequent and wanton trespasses in the burial grounds of this City. The corpse of a young gentleman from the West Indies was lately taken up, the grave left open and the funeral clothing scattered about. A very handsome and much-esteemed young lady of good connection was also carried off. These, with various other acts of a similar kind, inflamed the minds of people exceedingly, and the young member of the faculty as well as the mansions of the dead, have been quickly watched.”

“Hawley had fought for his freedom, only to find his choices of where he could live and the jobs he could practice were limited. Even the sanctity of his burial was in doubt.”

“Earlier in the month, he and a number of the city’s other free blacks had attended a council meeting to petition for the end of desecration to the Negroes Burial Grounds. The potter’s field had been routinely looted by medical students in need of bodies for their anatomy lessons and dissections. The city’s night watch did little to prevent it, focusing their efforts on protecting the white cemeteries. Meanwhile, Negro burial plots were ransacked by teams of resurrectionists, the corpses of friends and family stolen away in the darkest hours of night. Their hacked-apart remains were scattered around the filthy island for the pigs to feast on and for birds to pick at.”

“Some claimed that Bayley’s experiments would have made the Christ-followers of the Spanish Inquisition seem tame in comparison. With no regard toward his conscious or immortal soul, Bayley eviscerated, maimed, mutilated, murdered, and burned scores of men in pursuit of a mystic sight, all the while proclaiming the advancement of the physic and the pursuit of study.”