The Pumpkin Man by John Everson

Buy from Amazon.com The Pumpkin Man

After her father’s gruesome murder, Jenn needed a place to get away from it all with some friends, to take her mind off her grief. The empty seaside cottage she inherited seemed perfect. Jenn didn’t know that the cottage held arcane secrets, mysteries long hidden and best left alone. She didn’t realize until it was too late that the old books and Ouija board she found there really do hold great power. And it was only after her friend’s headless body was discovered that she knew the legend of the local bogeyman was no mere legend at all. An evil has been unleashed, a terrifying figure previously only spoken of in whispers. But now the whispers will become screams. Beware…The Pumpkin Man.

My Review
When an author the likes of Jonathan Maberry gives a novel like this praise, you’d better pay heed. He was right in say commenting, “This is a deliciously creepy novel”.
On the offset of the story I was hooked and under the spell of the Pumpkin man Its been a while since I have read a good creepy gory novel. The writing flows well and really keeps you on he edge of your seat. Everson is an author that I had not yet sampled and I am glad that I did his novels have either been nominated or won a Bram stoker award I will be hunting them out possibly Covenant.

The story is of the horror strain in its traditional sense one heavily laden with mysterious goings on, occult family, deaths and demon worship.
You won’t look at a pumpkin in the same way again!
He really pulls the chills out with the choice of character as a perpetrator of murder and the technique of killing will be engraved in you’re nightmares. An urban legend that is no joke Halloween brings death of the most twisted kind. The story is set in one of the creepiest surrounding you could think.
A young niece inherits a home from her aunt, she takes a trip to see her worldly gain and find clues that link the murder of her father and a chain of murders with her ancestors. You will find it a very dark enjoyable tale of evil presence. 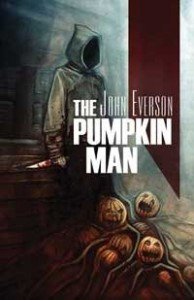 Reviewed by Lou Pendergrast on 27 October 2011