The Oracle Year by Charles Soule 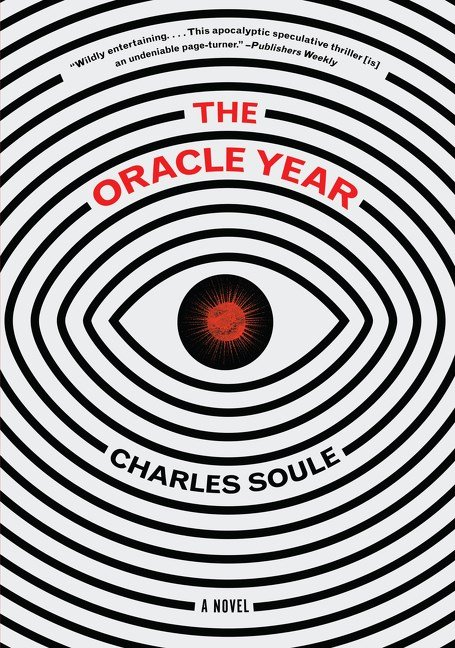 The Oracle Year by Charles Soule :

From bestselling comic-book franchise writer Charles Soule comes a clever and witty first novel of a twentysomething New Yorker who wakes up one morning with the power to predict the future—perfect for fans of Joe Hill and Brad Meltzer, or books like This Book Is Full of Spiders and Welcome to Night Vale

Knowledge is power. So when an unassuming Manhattan bassist named Will Dando awakens from a dream one morning with 108 predictions about the future in his head, he rapidly finds himself the most powerful man in the world. Protecting his anonymity by calling himself the Oracle, he sets up a heavily guarded Web site with the help of his friend Hamza to selectively announce his revelations. In no time, global corporations are offering him millions for exclusive access, eager to profit from his prophecies.

He’s also making a lot of high-powered enemies, from the President of the United States and a nationally prominent televangelist to a warlord with a nuclear missile and an assassin grandmother. Legions of cyber spies are unleashed to hack the Site—as it’s come to be called—and the best manhunters money can buy are deployed not only to unmask the Oracle but to take him out of the game entirely. With only a handful of people he can trust—including a beautiful journalist—it’s all Will can do to simply survive, elude exposure, and protect those he loves long enough to use his knowledge to save the world.

Delivering fast-paced adventure on a global scale as well as sharp-witted satire on our concepts of power and faith, Marvel writer Charles Soule’s audacious debut novel takes readers on a rollicking ride where it’s impossible to predict what will happen next.

Praise for The Oracle Year:

“Here’s my prediction: this book will seep into your soul. The Oracle Year is about knowing the future—and what you do with that knowledge. As you meet Will Dando, you can’t help but reevaluate yourself. Get ready for the best kind of fun.” – Brad Meltzer, New York Times bestselling author of The Inner Circle

“Soule’s The Oracle Year is like a sliding puzzle, except every time you think you can predict what the image will be, new pieces slide into place. It’s a wonderfully mysterious thriller that proves Soule is as much a master of prose as he is of comic book script.” – Chuck Wendig, New York Times bestselling author of Invasive and Blackbirds

“With The Oracle Year, Soule has created something truly special, both a globe-spanning thriller, and a razor-witted look at the modern human condition. The Oracle Year is easily one of the best debuts I’ve read in years.” – Scott Snyder, New York Times bestselling author of Wytches, Batman, and A.D.

“This volatile and unpredictable novel will entertain and keep you guessing until the very end.” – New York Journal of Books

“Someone out there could predict the future. The Oracle.”

Dear society
A site has gone viral excreting rhetoric and predictions of the fates our people. There is a new entity trying to remove you from your beliefs and claim power upon this earth, it has set in motion a clockwork of gears and doom is impeding pandemonium is near. Does the  Oracle have our safety in mind, what does it gain from all these predictions, a false prophet is amongst us, a charlatan , and I hear no talk of God in its statements, follow the money trail you will find the one who is the Oracle, a dangerous one, and possibly some alien form amongst us an interloper of our days that has set in motion our end of days, a storm is coming!
-from concerned citizen

(This letter is the kind of feelings the Oracle has set in motion in this tale expressed in ways by the authors characters written out in my own short form.)

As mentioned in this tale there is a song by The O Jays, “For the Love of Money.”
A classic song and you can’t help seeing that it all started like this. A lover of music and musician struggling to pay bills used this talent of foresight for the love of money, but as the tale moves forward, as the cogs and gears move, the moral lines became blurred and hope the main protagonist crosses with something else taking form, the love of humanity and peace. This world the Oracle has be jettisoned within has him in all the sound and fury “With Great Power Comes Great Responsibility,” words uttered by Voltaire and the Spider-Man and something the Oracle without a rule book will have to comprehend whilst he starts playing with destinies and free wills.

With all these factors in play, the reader will be thoroughly immersed in this world going yet again topsy turvy with this newfound belief in the Oracle, a new hope.

The story will hook you with anticipation in the outcome and final destination of chess match that seems to play out.

The author has the tale to the point, clear in telling with ease of read, captivating and entertaining, as collateral damage shows it ugly head, powerful people centre on and close a grip and circle on the Oracle and his identity, and powerful people across the world juxtaposed with a human catastrophe in the balance.

This could play out as an entertaining adaptation to a screen near you like Ready Player One, I predict without knowledge of the future.

“Twenty events, all accompanied by dates. The first two had already happened by the time the Site went viral, but the rest all were slated to occur in the future. Since then four more of those dates had passed, and on each, the event on the Site occurred, exactly as it described. Or more accurately, predicted—by an unknown person, presence, supercomputer, or alien that had become known as the Oracle, in the same way that the Site had become the Site.”

“Things happen in the world because the predictions are out there. People do things they wouldn’t otherwise have done. I’m changing the future.”
Will took more coins and dropped them into the fountain, a few inches apart, one after the other. Each created a new set of ripples, which interacted with the tiny waves generated by the others. Interference patterns—miniature geometries.
“There,” he continued. “Each prediction is a coin. It ripples out into the world, changing things, and sometimes those changes meet up with ripples from another prediction. They bounce off each other, and then something else happens.”

Questions to the Author on Goodreads :

What’s this about THE ORACLE YEAR being made into a TV show?

Charles Soule:
Glad you asked, Charles! On January 22, 2018, the acquisition of my upcoming novel THE ORACLE YEAR (out April 3 from the Harper Perennial imprint of Harper Collins) by a fantastic production house was announced on Deadline.com. Tomorrow Studios picked up the book, and I’m looking forward to helping see the process through to ideally be on screens big and small everywhere. You never know with this stuff, Hollywood being Hollywood, but I’m hugely thrilled at the opportunity, and I hope it drives readers to the book, too. The full press release is here: http://deadline.com/2018/01/tomorrow-…

Where did you get the idea for your most recent book?

Charles Soule:
I was a practicing attorney for over fifteen years before getting into comics. I still am, to a degree, but not like I was – I worked at large firms in NYC and then opened my own practice. During that time, I always knew that this was what I wanted to do – writing was always waiting for me – but I didn’t know if it would ever work, if I’d ever really be able to justify leaving the law. I was working two full-time jobs, really – the legal work plus doing everything I could to get things going on the writing front. I would have given everything I had to be able to get an answer to the question “Will this WORK?” Just that little glimpse of the future – this future – would have meant everything to me.

I think that’s probably a pretty relatable impulse to most of us. I had my question, but we all have our own: “Will he get better?” “Will all of this pay off in the end?” “Will I ever see her again?”

What will happen next?

That was the impetus for writing THE ORACLE YEAR. I wanted to write a book about a world in which that one question we all have about the future had a chance of being answered. It grew and expanded from there, but that was the seed.

It made for a pretty compelling idea to explore, especially in the unpredictable world we’re currently living in – and I think and hope a compelling read, as well.

What are you currently working on?

Charles Soule :
This changes constantly, because I do a ton of work for Marvel Comics as well as my own comics work, and the pace is very quick. (Quicker than novels, anyway.) Right now, I’m working on two Star Wars ongoing series for Marvel/Lucasfilm (Darth Vader and Poe Dameron), I’ve been the writer of Daredevil for about three years, I’m doing work in the X-Men world including the resurrection of Professor X and Wolverine. I also write my own creator-owned series CURSE WORDS with series artist and partner-in-curse Ryan Browne, which is published by Image Comics and has two volumes out thus far. I’m doing work to get ready for the release of THE ORACLE YEAR in April, and working on my second novel. Oof. It’s a lot, but I love it.

What’s the best thing about being a writer?

Charles Soule :
Creating worlds, and sharing those worlds. Bringing ideas to life, making myself think about things deeply and presenting those thoughts to readers. It’s always a rush.

How do you deal with writer’s block?

Charles Soule :
It’s not really much of an issue for me, generally – I’m always working on so many stories at once that if I don’t have the answer to a question on one book, I can shift to another one. If all else fails, I go for long runs – I love running, and it’s been a great help to me as far as finding ideas. The key, I think, is letting my mind rest. My subconscious seems to be better at problem-solving than my active mind, sometimes.

Reviewed by Lou Pendergrast on 03 April 2018