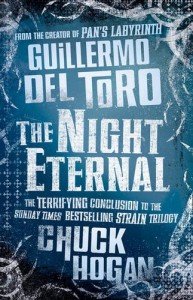 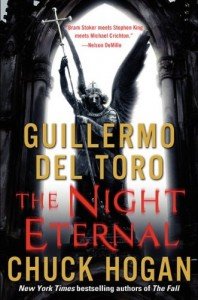 The Strain trilogy opened with an authentic wow moment: a Boeing 777 arrives at JFK airport with all but four of the passengers dead in their seats. The flashlight beams of the first responders “registered dully in the dead jewels of their open eyes.” Not much later these corpses begin to rise from their morgue slabs, and a plague of blood-hungry predators overwhelms New York. The first hundred pages of The Strain is a sustained exercise in terror that held this reader in spellbound delight, because del Toro and Hogan write with crisp authenticity about both the fantastical (vampires) and the completely real (New York City, with all its odd nooks and crannies).

What began in The Strain comes to a sublimely satisfying conclusion in The Night Eternal. Del Toro and Hogan have taken Dracula, the greatest vampire tale of them all, and deftly turned it inside out. In Stoker’s novel, Bloodsucker Zero arrives in England on a sailing ship called the Demeter. As with the Regis Air 777, the Demeter is a ghost ship when it reaches port, the eponymous Count having snacked his way across the ocean. The difference is that Dracula is confronted by a heroic band of vampire-hunters who eventually drive him from England by using modern technology—everything from diaries kept on wax recording cylinders to blood transfusions. In The Strain Trilogy, the body-hopping Master—who arrives at JFK in the person of Polish nobleman Jusef Sardu—uses the very technology that defeated his honorable forebear to destroy the civilized world. Big corporations are his tools; modern transportation serves to spread the vampire virus; nuclear weapons usher in a new era of pollution and atmospheric darkness.

Only jolly old England escapes; the wily Brits have blown up the Chunnel early on, and remain relatively vampire-free. At moments like this, the reader senses del Toro and Hogan tucking their tongues in their cheeks and having a gleeful blast.

When speaking of the New World Order in Henry the Sixth, Shakespeare has one of his characters say, “The first thing we do, let’s kill all the lawyers.” As The Night Eternal opens, the Master (currently having traded the body of Sardu for that of rock star Gabriel Bolivar) doubles down on that, ordering his minions to kill not just those in the legal profession but all the CEOs, tycoons, intellectuals, rebels, and artists. “Their execution was swift, public and brutal. Out they marched, the damned, out of the River House, the Dakota, the Beresford and their ilk…in a horrific pageant of carnage, they were disposed of.”

With the exception of heroic pawnbroker/scholar Abraham Setrakian (who almost destroyed the Master in Volume Two, The Fall), the winning cast of human characters from the previous novels are all present and accounted for: Nora Martinez, who has traded in her scientist’s microscope for a silver sword; Vasily Fet, who now exterminates vampires instead of rats; Augustin “Gus” Elizade, once a gangbanger and now a hero of resistance. There’s also the less-than-admirable but fascinating (in a repulsive way, it’s true) Alfonso Creem, with his insatiable appetite and his vampire-repelling mouthful of silver teeth.

And there’s Eph Goodweather, the epidemiologist around whom all these others revolve. When The Night Eternal begins, two years after the Master has used nuclear weapons to create vampire-friendly darkness all over the planet, Eph has fallen on hard times. His undead ex-wife stalks him relentlessly (he is, after all, one of her “Dear Ones”), his son has become a rifle-toting, obsessive-compulsive acolyte of the Master, and Eph himself has started popping Vicodin and oxycodone. Nora has left him for Vasily Fet, and Eph is viewed with distrust by those who used to rally around him. Justifiable distrust; he keeps showing up late for meetings and vampire-killing gigs.

Fet has managed to purchase a rogue nuke (it’s wrapped in garbage bags and looks like a trashcan), and the resistance fighters have a sacred book that may—if deciphered—lead them to the Black Site where the Master’s earthly life began. If they can destroy that holy soil, they believe the vampire plague will end.

There’s a certain amount of perhaps dispensable hugger-mugger about vampires in Rome and archangels in Sodom, but the main attractions here are the resistance fighters’ fierce dedication to their cause, and Eph Goodweather’s slow and painful realization that if he destroys the Master, he may also destroy his son Zachary, the last person on earth he truly loves. Heroes of tragic dimension are rare in popular fiction, but Goodweather fills the bill nicely.

After a small (and perhaps unavoidable—see Tolkein’s The Two Towers) letdown in The Fall, The Strain Trilogy comes to a rip-roaring conclusion in The Night Eternal. The action is non-stop, and the fantasy element is anchored in enough satisfying detail to make it believable. All the New York landmarks, such as Central Park’s Belvedere Castle and The Cloisters, are real. And while you’re discovering such essential vampire facts as the undead’s inability to cross running water without human help, you’ll also find out that the stone lions outside the New York Public Library have names: Patience and Fortitude. Plus, come on, admit it—there’s something about seeing vampires massing for an attack in a Wendy’s parking lot that makes them more real. The devil’s in the details, and this is one devilishly good read full of satisfying scares. — Stephen King

A great cataclysmic finale to a story of biblical proportions, a story thats unearths a history as old as mankind.

A father and a son separated across the Atlantic, are two important characters in this third and grand finale of a book. The father Dr Ephraim Goodweather, once a prominent epidemiologist with the Centers for Disease Control and Prevention, has a very important role, for the end of times is near either for the humans or the vampire race. For some reason, which will be unveiled in the book, Ephraim is drawn to the deciphering of the ‘Lumen.’

The Occido Lumen is an important book, a wanted book by ‘The Master'(the evil leader of the vampires), it is a book of revelations to the vampires, just like the holy books of the humans. It contains the creation and history of the worlds vampire race.

The son, Zack has also a vital role in the darkness ensuing, he is being controlled in the old art of the vampires of telepathic mind control, groomed into a vessel that the Master the one vampire who wishes to soon inhabit his body. The boy Zack lived like a prince under the watchful eye of the evil Master, In a real castle in the centre of a giant city. He was given anything he wanted and was handed a zoo to own. But, here is the big but! It all came at a price, a price Zack was not aware of due to the mind control. The price was he is to be the next body host for the master who at present is in possession of a rock stars body. Zack has been lied to his father he was told was dead and his mother a turned vampire in service of the master. The master was controlling his actions and thoughts and emulating the darkness of his heart, to make him more evil. The master gets kicks out acts of decadence and brutality. The boys young mind was an agreeable lump of dough, one the Master continued to knead. There is one scene that stays with you where the boy is placed in a position where he has to kill one animal, on orders from the master, to save the other animals and to keep and own the zoo.

The father races against time in saving the planet and his son from complete human extinction. The others on his side is ‘the born’ Mr Quinlan another ancient vampire who’s against the master, and a band of people courageous souls who mostly have lost loved ones to the vampires.

They are against the master and his band of vampires (strigoi), feelers(four legged blood suckers), and humans that work in his service.

This proved, where many have failed! that a trilogy can really work and the third book can be one of the strongest stories. I don’t really have nightmares after reading books but this gave me one hell of a nightmare last night. The two authors really take you back to the beginning with this book and answer all the questions you were left in doubt about in the first and second book, it tells the story of the genesis of the vampires, the ancients, the first few. There are powers more greater than you can fathom at play in the order of the things, that will or will not save humanity, time will tell.

He has really plotted deep and added some real darkness to this story and genre on a whole, he has rewritten the script on vampires. Forget romance and the now vampire fluffiness ever present in novels, this is darkness true and true a real engrossing tale of humanities perilous battle for survival from the first novel to the third and grand finale.

“Eph wondered what time it was. Sometime o’clock in the morning, he figured, judging by his own failing circadian rhythm. It was summer-at least according to the old calendar-and so the sun should have been high and hot in the sky.

Instead, darkness prevailed. The natural order of the night and day had been shattered, presumably forever. The sun was obliterated by a murky veil of ash floating in the sky. The new atmosphere was comprised of the detritus of nuclear explosions and volcanic eruptions distributed around the globe, a ball of blue-green candy wrapped inside a crust of poisonous chocolate. It had cured into a thick, insulating cowl, sealing in darkness and cold and sealing out the sun.

Perennial nightfall. The planet turned into a pale, rotting netherworld of rime and torment

The perfect ecology for vampires.”

“For the Master, it is best to consider the whole of recorded human history as a series of test runs. A set of experiments carried out over time, in preparation for the final master stroke. The Master was there during the rise and fall of the Roman Empire. He learned from the French Revolution, the Napoleonic wars. He nested in the concentration camps. He lived among you like a deviant sociologist, learning everything he could from and about you, in order to engineer your collapse. Patterns over time. The Master learned to align himself with influential power brokers, such as Eldritch Palmer, and corrupt them. He devised a formula for the mathematics of power. The perfect balance of vampires, cattle, and wardens.“

Reviewed by Lou Pendergrast on 15 October 2011