The Migration by Helen Marshall 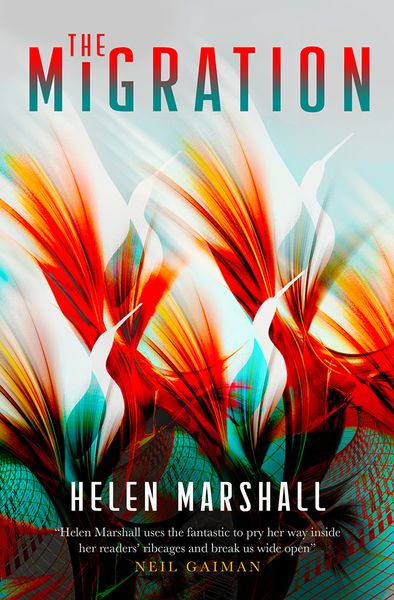 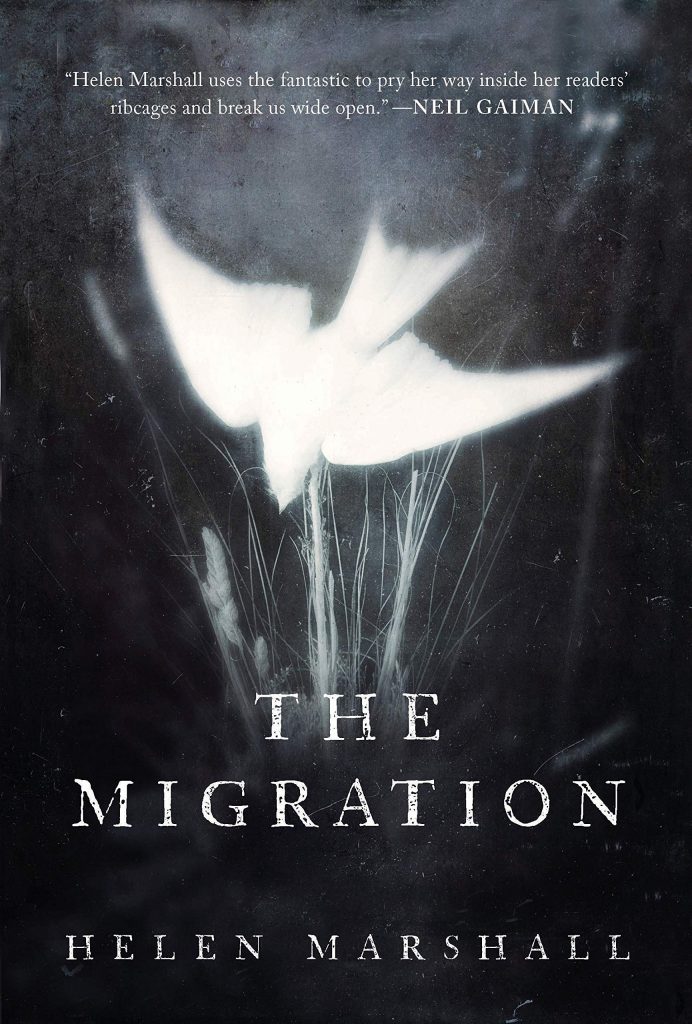 When I was younger I didn’t know a thing about death. I thought it meant stillness, a body gone limp. A marionette with its strings cut. Death was like a long vacation – a going away.

Storms and flooding are worsening around the world, and a mysterious immune disorder has begun to afflict the young. Sophie Perella is about to begin her senior year of high school in Toronto when her little sister, Kira, is diagnosed. Their parents’ marriage falters under the strain, and Sophie’s mother takes the girls to Oxford, England, to live with their Aunt Irene. An Oxford University professor and historical epidemiologist obsessed with relics of the Black Death, Irene works with a centre that specializes in treating people with the illness. She is a friend to Sophie, and offers a window into a strange and ancient history of human plague and recovery. Sophie just wants to understand what’s happening now; but as mortality rates climb, and reports emerge of bodily tremors in the deceased, it becomes clear there is nothing normal about this condition – and that the dead aren’t staying dead. When Kira succumbs, Sophie faces an unimaginable choice: let go of the sister she knows, or take action to embrace something terrifying and new.

Tender and chilling, unsettling and hopeful, The Migration is a story of a young woman’s dawning awareness of mortality and the power of the human heart to thrive in cataclysmic circumstances.

Praise for The Migration:

“It’s a thoughtful novel that places the love between two sisters at the center, and builds around it an intense sci-fi tale of disease and evolution. . . . Marshall skillfully builds a world only a step away from our own, delving into the parallels with previous periods of worldwide disease and chaos, and conjuring an all-too-realistic near future with a light touch.”
—SFX Magazine

“In her debut novel, Marshall adapts [fable, dark fantasy, and myth] to a narrative that simultaneously flirts with dystopia and reckons with mortality. . . . Marshall is painting on a large canvas here and her style is unabashedly baroque: the novel is characterized by a high level of drama, intensity, and movement . . . [The Migration] proves ultimately optimistic about the ability of the human species to adapt to its circumstances.”
—Quill & Quire

“This beautifully written fictional blend of biology, history, and the human heart is a clear-eyed, clean-limbed parable of change. Marshall’s close focus on the nature of emotional and physical metamorphosis becomes a blazing emblem of the transcendent power of hope.”
—Nicola Griffith, author of the Light of the World trilogy

“A dark fable that somehow feels both timeless and urgently topical. The Migration is heart-wringing and powerful, but over and above that, it’s just vivid and immersive and enthralling throughout.”
—M.R. Carey, author of The Girl with All the Gifts

“Intelligent, dark, wildly inventive, The Migration does more than put a new twist on the apocalyptic outbreak novel. It dares to be full of heart and full of difficult, defiant hope.”
—Paul Tremblay, author of A Head Full of Ghosts and The Cabin at the End of the World

“Helen Marshall is a writer who creates real people in real situations, then uses the fantastic to pry her way inside her readers’ ribcages and break us wide open.”
—Neil Gaiman, international bestselling author of The Ocean at the End of the Lane

“The dead should stay dead.”

There is an unknown, the source and the end of those that have been infected by an outbreak, one that affected young people, an insidious strain of J12, a Juvenile Idiopathic Immunodeficiency Syndrome.

Sophie, a likeable and memorable character, is on a mission to discover the fates of those that die from this virus or bacterium, and as her sister, who has the disease, shifts into decline and death, she wants to find out her real end.
A cremation would be the end of the discovering and so something that must be stopped.

Majestic, mysterious, and haunting story, hypnotically taking you under it wings and unraveling though the voice of seventeen year old Sophie.
The metamorphosis, the becoming, all immersive reading having you refuse to close the wings of the book or descend the tale into darkness by powering off.
The author has done a great job with unraveling the story with an economy of words played out in a melody of sentences that evoke mystery, vividness, the pace, the chaos, with discovery and transformations in this memorable tale dealing with realms unknown, plague, cataclysmic events, death, loss and possible reassuring the disquieting of their end.

This novel was provided kindly by Titan books and recommended by author Paul Tremblay in a recent interview I had with him, it did not disappoint.

“Disease presents us with the worst picture of humanity we can imagine. It shows us our fallibility, our mortality. At a basic level it makes us fear for our lives, for our communities, and that fear can be a powerful incentive for violence. But in times of plague there are also stories of great kindness, generosity and heroism. It’s the testing ground of a civilization.”

“Time is an arrow without a target, hurtling into the unknown. What will happen to me if Mom goes away? To our family? Kira’s death has changed us all. And we’re still changing, everything still in motion, nothing coming to rest. Stars, cities, sisters.
How much does Kira still feel? Has she locked away some memory of me within that strange, new form? Does she know where all this is going? Does she have a mind? A soul?
I suppose it isn’t just her I’m thinking about, but me. How I should’ve done all this first so she’d know the way. So she wouldn’t be alone. How for once she is going to reach the end of something before I do.
I’m afraid of being left behind. I guess that hurts too.”

HELEN MARSHALL is the World Fantasy Award-winning author of two short story collections and two poetry chapbooks. Her stories and poetry have appeared in magazines and anthologies including Abyss & Apex, Lady Churchill’s Rosebud Wristlet and Tor.com. She obtained a PhD from the Centre for Medieval Studies at the University of Toronto, and then spent two years completing a postdoctoral fellowship at the University of Oxford investigating literature written during the time of the Black Death. Helen has worked as a managing editor for ChiZine Publications, and was recently hired as a permanent Lecturer in Creative Writing and Publishing at Anglia Ruskin University in Cambridge. She grew up in Sarnia, Ontario, and now resides in Cambridge. The Migration is her first novel.

Reviewed by Lou Pendergrast on 10 March 2019