Book Review: The Man Who Caught the Storm by Brantley Hargrove - More2Read

The Man Who Caught the Storm by Brantley Hargrove 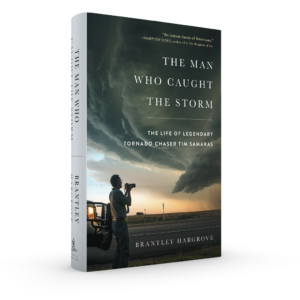 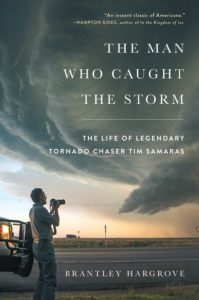 The Man Who Caught the Storm is the saga of the greatest tornado chaser who ever lived: a tale of obsession and daring, and an extraordinary account of humanity’s high-stakes race to understand nature’s fiercest phenomenon.
At the turn of the twenty-first century, the tornado was one of the last true mysteries of the modern world. It was a monster that ravaged the American heartland a thousand times each year, yet science’s every effort to divine its inner workings had ended in failure. Researchers all but gave up, until the arrival of an outsider.

In a field of PhDs, Tim Samaras didn’t attend a day of college in his life. He chased storms with brilliant tools of his own invention and pushed closer to the tornado than anyone else ever dared. When he achieved what meteorologists had deemed impossible, it was as if he had snatched the fire of the gods. Yet even as he transformed the field, Samaras kept on pushing. As his ambitions grew, so did the risks. And when he finally met his match—in a faceoff against the largest tornado ever recorded—it upended everything he thought he knew.

Brantley Hargrove delivers a masterful tale, chronicling the life of Tim Samaras in all its triumph and tragedy. He takes readers inside the thrill of the chase, the captivating science of tornadoes, and the remarkable character of a man who walked the line between life and death in pursuit of knowledge. Following the tradition of Into Thin Air and The Perfect Storm, Hargrove’s debut offers an unforgettable exploration of obsession and the extremes of the natural world.

“With The Man Who Caught the Storm, Brantley Hargrove has given us a thrilling tale of Promethean defiance, one that in our age of superstorms and climate change has much currency today. Pairing rich reporting with an exquisite sense of pacing, Hargrove has chased down the king of the chasers. Here is an instant classic of Americana—a story of tragedy, invention, lore, science, and a most original kind of genius who was irresistibly drawn to one of nature’s most awesome and violent mysteries.”
—Hampton Sides, author of Ghost Soldiers and In the Kingdom of Ice

“An exemplar of narrative nonfiction. … [Hargrove] is a deft writer who uses evocative prose to provide readers the adrenaline rush of a tornado chase. … Readers from all across the spectrum will enjoy this title.”
—Library Journal, Starred Review

“This is what man versus nature is all about. A powerful, vivid, and ultimately heartbreaking investigation into the life of one very brave storm chaser. Brantley Hargrove has given us a masterful biography with all the best attributes of a novel.”
—Skip Hollandsworth, author of The Midnight Assassin

“A vivid, beautifully written, and incredibly reported page-turning tale of a man’s obsession with one of the most powerful forces in nature.”
—Cowboys and Indians Magazine

“Maybe you’ve noticed the news: the climate is angry, and we can look forward to ever more extreme storms. In his fast-moving, page-turning book, The Man Who Caught the Storm, Brantley Hargrove captures an urgent moment in human history: a time when we’re in a race not only to understand nature’s increasingly raw power, but also to survive it.”
—Susan Casey, author of Voices in the Ocean

As the author mentions of the wonder, adrenaline, and a pull exerted towards hunting down the tornados, this truth work also pulled me through, as a newbie of tornados, through all the technicalities to the final days of the brave Storm chaser Tim Samaras.
Captivating at times, informative right through of the determination and obsession Tim Samaras possessed and displayed to achieve his goals against a great giant and monster, within his own David and goliath narrative, up against a devastating entity that rips asunder all in its path, living on the edge and right through, through the eye of the storm, taken by the hand of the author with meticulously researched work.

Later on in my sleep….
That Storm in Wizard of oz

“In the United States, the damage caused by tornadoes has outstripped that of fires, earthquakes, and floods and is nearly on a par with that from hurricanes. The most violent type—the EF4s and EF5s—are exceedingly rare, accounting for roughly one to two percent of all tornadoes. A storm chaser may never see an EF5 in his lifetime. Yet despite their infrequency, some seventy percent of tornado fatalities are attributable to the deadliest breed. The scale of these disasters is nearly beyond accounting.”

“Before long, Tim is finding himself in the right place at the right time. He’s racing those big black clouds, antennas swaying like reeds from the roof of the Datsun, accompanied by only the sound of Morse code bleating from his ham radio and the baritone wind over the Colorado plains. Weather service radar can detect tornadic circulation within the storm, but that doesn’t always mean a tornado is on the ground. That’s where SKYWARN comes in. The organization’s trained spotters provide what’s known as ground truth. Tim starts volunteering for the role, and he quickly develops a reputation as a spotter whose reports are reliable. He isn’t one of those guys who cries “twister” when he sees stray tatters of cloud or dense rain shafts. No, he’s got an eye for this.”

“Tim is, if nothing else, a bit of a cheapskate. He can cobble together working instruments out of what looks like junk. Over at DRI, they call it kludging, which means being resourceful and making an invention work with what you have at hand. But for all the half-improvised, battery-draining toys in the Dryline Chaser, he considers the CD player to be his most essential tool. Neil Young and Eric Clapton stay in heavy rotation.”

“The old axiom holds that they are far more likely to get killed on the road, on the way to a storm, than in a tornado itself. And it’s miraculously true: no chaser has yet died in a tornado. But chasers continue to get closer and closer, goaded by the prospect of social-media glory, YouTube notoriety, and the modest sums earned by selling video rights to TV news.”

“Tim is troubled not just by what he’s seen today but by the scene around him—a giddy celebration of tempted fate. But even as he frets over the danger evident in clip after clip, the arc of his own history bends toward ever greater proximity to the lethal winds. The greatest intercept of his life was no less a nail-biter than Kiesling’s, though Tim would like to believe that the risks he takes serve a higher calling. Years ago, he was inspired by men who hunted tornadoes for science. He’s one of them now. But the truth about implacable nature is that it doesn’t distinguish between those who approach for knowledge, and those who approach simply to see something beautiful, frightening, or titillating.”

“In the interlude between seasons, Tim begins to bend his engineer’s mind to the task of envisioning a new direction for his probe program. He is a man pulled in many directions, by family, by a demanding full-time job at Applied Research Associates, and by TWISTEX. After his day job, after dinner with his family, Tim descends into the basement of his Lakewood home—Kathy calls it his “sanctuary”—and begins to conceptualize and construct a brand-new probe. Rare are the moments when his children find him relaxing on the couch.”

Reviewed by Lou Pendergrast on 06 April 2018