The Light Brigade by Kameron Hurley 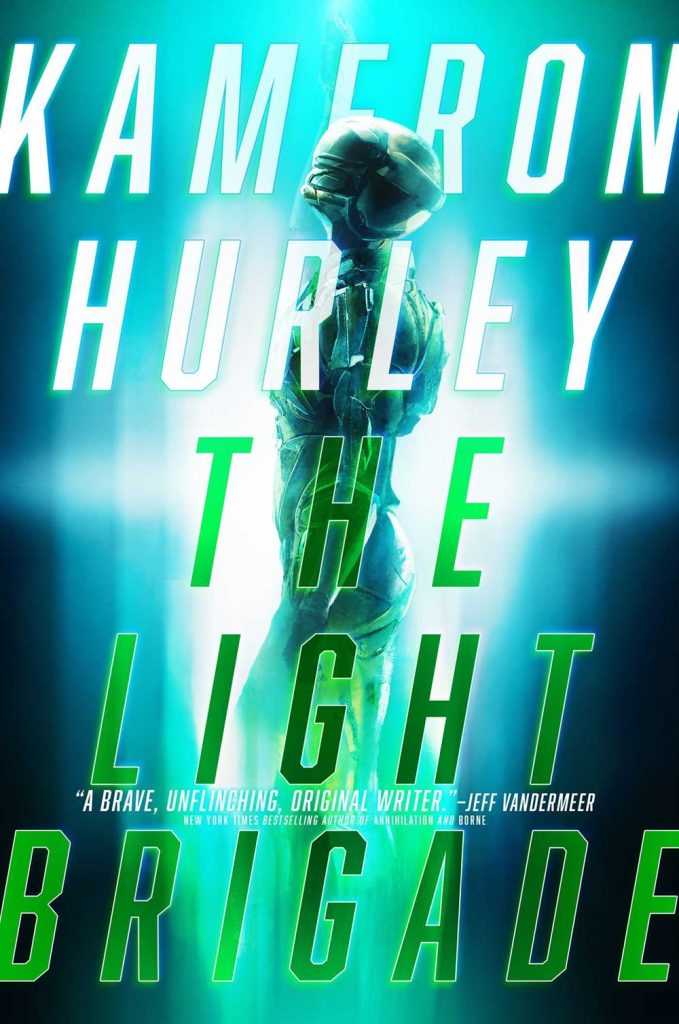 From the Hugo Award­­–winning author of The Stars Are Legion comes a brand-new science fiction thriller about a futuristic war during which soldiers are broken down into light in order to get them to the front lines on Mars.
They said the war would turn us into light.
I wanted to be counted among the heroes who gave us this better world.

The Light Brigade: it’s what soldiers fighting the war against Mars call the ones who come back…different. Grunts in the corporate corps get busted down into light to travel to and from interplanetary battlefronts. Everyone is changed by what the corps must do in order to break them down into light. Those who survive learn to stick to the mission brief—no matter what actually happens during combat.

Dietz, a fresh recruit in the infantry, begins to experience combat drops that don’t sync up with the platoon’s. And Dietz’s bad drops tell a story of the war that’s not at all what the corporate brass want the soldiers to think is going on.

Is Dietz really experiencing the war differently, or is it combat madness? Trying to untangle memory from mission brief and survive with sanity intact, Dietz is ready to become a hero—or maybe a villain; in war it’s hard to tell the difference.

A worthy successor to classic stories like Downbelow Station, Starship Troopers, and The Forever War, The Light Brigade is award-winning author Kameron Hurley’s gritty time-bending take on the future of war.

Praise for The Light Brigade:

“Hurley is one of the most important voices in the field, and Light Brigade is some of her best work. This is the real thing.”
— — James SA Corey,, author of the bestselling Expanse series

“Starship Troopers meets Edge of Tomorrow. A call for us all to be the light in dark times.”
—Rebecca Roanhorse, Hugo and Nebula Award-winning author of Trail of Lightning

“[A] brutal futuristic exploration into the meaninglessness of war and the legacies of corporate greed.”
— — Kirkus Reviews

“Highly recommended for not only sf fans but anyone interested in a thrilling and troubling vision of the future.”
— Booklist

There is light,
even with a War of the Worlds.
Who are they really fighting?

Trapped in a crucible.

With..
“Whole world’s in quarantine,”

She is.
“Old enough not to be dazzled by Ayn Rand.”

“My favorite detectives; Sam Spade and Columbo . . . the rogue detective in Despiadado.”

“Two million people, gone in a blink. And our response: half a continent scorched of all life. A ruined Martian landscape. Murdering our own children.”

The myriad of things around these facts, the complexities being part of the light brigade, the truth of the war, and the corrupt, who are the real enemies, all dealt with with careful crated prose that leaves you wanting more, to expand more, and continue with another episode of this pensive military sci-fi tale with the light brigade.

Kameron Hurley is the acclaimed author of the novels God’s War and The Mirror Empire. Hurley has been awarded two Hugo Awards, the Kitschky Award for Best Debut Novel, and has also been a finalist for the Nebula Award, the Arthur C. Clarke Award, the British Science Fiction and Fantasy Award, and the Locus Award. Visit the author online at https://www.kameronhurley.com

Reviewed by Lou Pendergrast on 20 March 2019