The Kings of Cool by Don Winslow - more2read.com

The Kings of Cool by Don Winslow 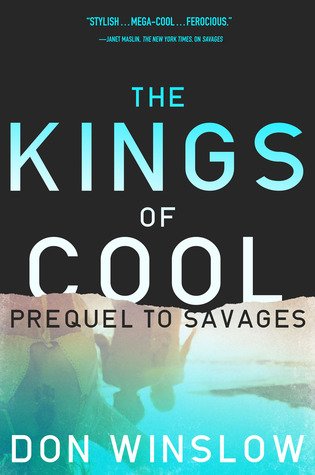 In Savages, Don Winslow introduced Ben and Chon, twenty-something best friends who risk everything to save the girl they both love, O. Among the most celebrated thrillers in recent memory—and now a major motion picture directed by Academy Award–winning filmmaker Oliver Stone—Savages was picked as a best book of the year by Stephen King in Entertainment Weekly, Janet Maslin in The New York Times, and Sarah Weinman in the Los Angeles Times.

Now, in this high-octane prequel, Winslow reaches back in time to tell the story of how Ben, Chon, and O became the people they are. Spanning from 1960s Southern California to the recent past, The Kings of Cool is a breathtakingly original saga of family in all its forms—fathers and sons, mothers and daughters, friends and lovers. As the trio at the center of the book does battle with a cabal of drug dealers and crooked cops, they come to learn that their future is inextricably linked with their parents’ history. A series of breakneck twists and turns puts the two generations on a collision course, culminating in a stunning showdown that will force Ben, Chon, and O to choose between their real families and their loyalty to one another.

We once again visit the bad-ass trio Ben, Chon and O.

Contained within these pages you’ll find sun, surfers, hippies and W.D, standing for war on drugs, wars with drugs and wars and drugs.
Surfers and hippies take you back to the origins of Chon and his family, back to when he wasn’t given this oriental sounding name that has nothing to do with his ethnicity but just a funny moment in his life.
There are plenty of humorous moments delivered with sharp dialog and blistering social commentary.
The famous characters Frankie Machine and Booby Z make an appearance in here from Don Winslow’s other novels. Bobby Z is featured more in the past than Frankie Machine who is just mentioned briefly.
We visit their becoming men and one first love.
With Chon we visit the sins of his father.

His father has an important role and significance to who he is now, love him or hate him.
We taken back to the bygone days in California where the dealing and using of weed shifted to harder drugs and more dangerous drugs.
We are also taken through Chon’s time in the armed forces and his leaving of it.
We learn of how Ben and Chon met.
How O fell in love with Chon

In the present Ben finds himself in a jam with the progressing war on drugs and in a tight spot. This happens while Chon is away in the battlefield but they soon find themselves  reunited and Ben in need of Chon’s help.
The whole cartel is under a watchful eye and when push comes to shove scarifies need to be made in California.

This story never let up for me in pace and the characters were large in character.
The sentences were slick and straight to the point, all these trademarks left in this novel and Savages cements Don Winslow further in the literary hall of fame as a no-nonsense blistering writer of modern day noir.

A thrill ride full loaded with humor, drugs, love, family and wars.
Reads with sharp dialog and sentences that keep you hanging over the last word with page turning awesomeness and smartness.

“Okay with Chon.
But he knows
The past isn’t the past.
It’s always with us.
In our history.
Our minds, our blood.”

“And who is this guy?
Whoever he is, he gave Ben one of those old-school stares until Ben actually had to laugh.
OGR stood up and said,”You Mouth*****s think you’re the kings of cool, right? You know everything, no one can tell you anything? Well, let me tell you something-you don’t know shit.”
OGR gave Ben one more Bobby Badass look and then walked out.
The kings of cool. Ben thought.
He kind of liked it.
Now he turns his attention back to the game.”

“It’s an age-old debate, not be rehashed here, but basically-Ben believes that to answer violence with violence only begets more violence, while Chon believes that to answer violence with nonviolence only begets more violence, his evidence being the entire history of humanity.
Oddly enough, they both believe in karma- what goes around comes around-except with Chon it comes around in a freaking hurry and usually with ill intent.
What Chon calls “microwave karma.”
Together, Ben and Chon make up a collective pacifist.
Ben is the paci
Chon is the fist.”

“Now you have Republican Orange County’s baddest nightmare-the worst antisocial elements (surfers and hippies) gathered on one combination plate in a demonic, drug-induced love fest.
And planning to institutionalize it, because…”

My review of Savages >> https://more2read.com/review/savages-by-don-winslow/