The Hungry 2 The Wrath of God by Harry Shannon, Steven W. Booth

The Hungry 2: The Wrath of God by Harry Shannon, Steven W. Booth 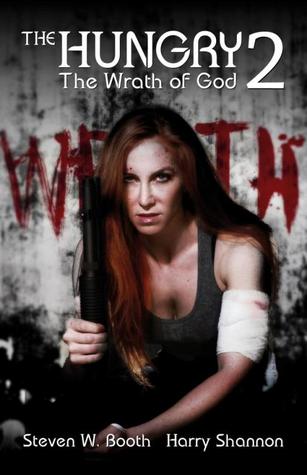 After surviving the first days of the zombie apocalypse, Sheriff Penny Miller and her friends relax in what’s left of Las Vegas. The Army asks Miller and her party to return to Crystal Place, the Top Secret base that was birthplace of the zombies. Even though the mission is to recover data that may lead to a cure for the virus—and Miller herself—she’s pretty sure it’s a bad idea. The Army assures her that a crack team of mercenaries will be there to protect them every step of the way.

When Miller sees weird religious graffiti scrawled in blood on the concrete walls of the deserted base, she’s sure their chances of survival have just dropped to damn near zero. Again.

Sometimes it sucks being right!

Order from iTunes The Hungry 2

Those are the grunts of the undead.

Sheriff Penny Miller, you stole my heart when I first learned of you in the Hungry debut. Now you have rightfully brought it back again with some sweet justice in continuing to kill slobbering, rotting, stinky-assed walking corpses.

Miller was a unique specimen. The only living person to have received both the zombie virus and the antidote. She went to hell and back and survived. Her nightmares testify to the fact that the last thing she wants is to be back in zombie central to pick up dirty laundry, a place where she and her friends almost died.

She is given options: money and freedom for her band of men to get in and out before anyone knows. Back to the unforgiving and hidden violence of the desert plagued with the undead. They promised them greener pastures in return – and money. Will they be able to spend the money?

What people would do for money and freedom.

Has Sheriff Penny Miller bargained for more than she can handle?

“Hell no!” I say. She is one of the toughest gals you’re gonna find on this darn earth, and with plenty of heart.

One thing for sure is she and her band of men know what’s to be expected in the unforgiving barren land, and this time ‘round they’re experienced in killing the undead.

We also learn Penny’s heart is as big as the desert she walks on. She’s a wounded soul emotionally and needs some loving.

Oh yeah. Another thing is they are in a race against time.

There is a clock ticking from 26 hours and 36 minutes down to zero, the annihilation of the zombie zone. Which will then be known as a nuked zone!

This second installment involving Sheriff Penny and the zombie outbreak is more fast-paced than the first. Sheriff Penny is not in a wedding dress this time around, just basic apparel; a vest. And she is to be put through one of the greatest tests of her life. Her friendship with her comrades is also under a test and she must know who to trust.

In this installment, Sheriff Penny meets an equal of sorts in the shape of Major Francine Hanratty, dubbed Rat by her peers. Together they fight for leadership with Penny and her comrades and Rat’s comrades in tow. They must get through this together in order to survive.

Las Vegas had been abandoned and Nevada been placed under quarantine until the whole thing gets resolved.

They will find themselves outnumbered, under-supplied, and behind enemy lines again.

In zombie central they find life not of the undead but in the form of a strange man who talks of belief and minions of the evil one. He’s just what this story needs, an interesting addition to the already colourful characters within in this story. (For the newcomers, this book can be read without reading the debut.)

The already large following of Sheriff Penny Miller will be up in arms rejoicing this fun, fully-loaded, brain entrails explosion of a high-octane charged zombie story.

Miller still displays plenty of humour and common sense. For example: “Miller had learned a long time back that a man in lust was also unguarded and dumb as a fence post.”

Also, Rat, with an equal sense of humour: ” ‘What about them [the zombies]?’ snapped Rat. ‘They’re unarmed, unarmored, uncoordinated, and from what I understand, dumber than dog shit. Like I said, one headshot takes them out. That’s a piece of cake for a first-rate team of marksmen. What are you so worried about, Dale? ‘ ”

Order from iTunes The Hungry 2