The Hunger by Alma Katsu

A tense and gripping reimagining of one of America’s most fascinating historical moments: the Donner Party with a supernatural twist.
Evil is invisible, and it is everywhere.

That is the only way to explain the series of misfortunes that have plagued the wagon train known as the Donner Party. Depleted rations, bitter quarrels, and the mysterious death of a little boy have driven the isolated travelers to the brink of madness. Though they dream of what awaits them in the West, long-buried secrets begin to emerge, and dissent among them escalates to the point of murder and chaos. They cannot seem to escape tragedy…or the feelings that someone–or something–is stalking them. Whether it’s a curse from the beautiful Tamsen Donner (who some think might be a witch), their ill-advised choice of route through uncharted terrain, or just plain bad luck, the ninety men, women, and children of the Donner Party are heading into one of one of the deadliest and most disastrous Western adventures in American history.

As members of the group begin to disappear, the survivors start to wonder if there really is something disturbing, and hungry, waiting for them in the mountains…and whether the evil that has unfolded around them may have in fact been growing within them all along.

Effortlessly combining the supernatural and the historical, The Hunger is an eerie, thrilling look at the volatility of human nature, pushed to its breaking point.

Praise for The Hunger:

Katsu injects the supernatural into this brilliant retelling of the ill-fated Donner Party….Fans of Dan Simmons’s The Terror will find familiar and welcome chills.”
—Publishers Weekly

“For fans of historical fiction and the supernatural, Katsu’s goosebumpy and spooky plot makes for an original and surprising read.”
—Library Journal (starred review)

“A suspenseful and imaginative take on a famous tragedy.”
—Booklist

“An inventive reimagining…Westward migration, murder, sensation: the story of the Donner Party has all this….Katsu creates a riveting drama of power struggles and shifting alliances….The tensions [she] creates are thrilling.”
—Kirkus Reviews

“Grips readers from the opening paragraphs and doesn’t let go. Full of richly drawn and fascinatingly flawed characters, this is a story that is respectful of the history it relates, but doesn’t shy away from the sins, mistakes and bigotry of the past, to impressive effect.”
—RT Book Reviews

“The isolation is anxiety-inducing and the tension is perfect….Well-written and gripping with a strong conclusion, The Hunger is an inventive take on an already morbidly fascinating historical event. Recommended.”
—Historical Novel Society

“Alma Katsu has taken one of the darkest and most chilling episodes in our history, and made the story even darker, even more terrifying. I swear I’m still shuddering. A fantastic read!”
—R.L. Stine, author of the Goosebumps and Fear Street series

“Like The Revenant but with an insistent supernatural whisper. The setting and the story are utterly chilling. And the telling of it is so well done.”
—Sarah Pinborough, author of Behind Her Eyes

“The Hunger is a terrific historical novel with a thrilling, bloody twist. Alma Katsu’s brilliant reimagining of the Donner party’s fate is rich with character, laden with imminent doom, and propelled by chilling mystery. A novel that book clubs and dark fiction fans should devour with equal relish.”
—Christopher Golden, author of Ararat and Snowblind

“If you think the story of the Donner Party can’t get more horrific, think again. In this gripping, atmospheric reimagining of that dark tale, Katsu has created a deeply unsettling and truly terrifying masterpiece.”
—Jennifer McMahon, author of Burntown and The Winter People

“An uneasy, nauseous, slow-burning tale that marries historical fiction with a hint of the supernatural. Great detailing; colorful characterization; some supremely ominous stuff, but always reined in at the final moment to rack up the tension even more. Loved it!”
—Joanne Harris, author of Different Class and Chocolat

“The Hunger is a bold and brilliant novel, heavy with foreboding and dread, and with a rich vein of humanity at its core. I challenge you to read it without experiencing your own hunger pangs.”
—Tim Lebbon, author of Relics and The Silence

“In an audacious twist, Alma Katsu has made something new and suspenseful from the legendary story of the Donner Party. The Hunger is filled with terror, pity, and grue.”
—Keith Donohue, author of The Boy Who Drew Monsters and The Stolen Child

“They were intrepid pioneers, about to blaze a new trail through the wilderness; their names would go down in history.”

“Something terrible had compelled her across the thin frozen ice of the river that winter day, an evil that lived among them that he had failed to see. In this, at least, his grandfather had been correct. Evil was invisible, and it was everywhere.”

“But still, Stanton knew the human mind was susceptible to insidious influence, especially when people were hungry, tired, and afraid.”

Outward bound, a journey, a band of people set out for betterment, maybe in search for answers, the dispossessed, an immigration upon the land, and possibly a possession of sorts taken upon them, one by one, as the unflinching and terrible beauty of the land and what insidiously moves upon it, they drop in number. They embarked across the vast terrain, snow, desert, and woodland, a band of people mostly children, then woman, then men, in small numbers lead by varying beliefs, prejudices, and decisions to be made to survive. Ultimately a tale of survival for people upon the earth with heart at conflict with themselves with what they have to do to survive the bitter cold, the scarcity of food, and the ultimately the hunger as the title of the tale goes.

Maybe the reader when thinking of ice and a strange hunger may rekindle the images from other fictions like that of Game of Thrones and the white walker, the zombies of walking dead, or the vampires and wolves of twilight.

There is our fair share of strangeness and hunger out there in fiction now but this tale still has something to offer an element of suspense and horror of what lurks and what becomes.

The author keeps you thoroughly immersed with the fate of the characters at hand and the decisions and roads they undertake upon the wilderness with this tale of survival against the odds, the psyche, mythology, prejudices, and at its core against each other and the hunger.

That’s the magic of the narrative that remains with the reader all these fundamental human elements at odds with itself left to ruminate and stir what became and can become of people.

The author has successfully highlighted racism and stereotypical attitude of the time toward the native American groups with some of the characters in this tale.

A tragedy of people with truth in history from the 1840’s reimagined with some careful craft in telling with that fictional element of supernatural and what lurks embedded.

“Everyone agreed it had been a bad winter, one of the worst in recollection. Bad enough to force some of the Indian tribes, Paiute and Miwok, down from the mountain. There was no game to be had, and a restless hunger rippled through their movements, left barren camps full of black, scentless fire marks behind them like dark eyes in the earth. A couple of Paiutes even said they’d seen a crazy white man who had managed to survive all by himself through this god-awful winter, skimming over the frozen lake like a ghost. That had to be their man: a fellow named Lewis Keseberg.”

“Doing the washing for the large Graves family was one of Mary’s many responsibilities. Twelve people—her mother and father, five sisters and three brothers, not to mention her older sister Sarah’s husband—meant a lot of dirty clothes and linens, and Mary preferred to do a little every night rather than let it pile up. It was one of the few times she could be by herself. Her entire day, it seemed, was spent in the company of her family: minding her younger siblings, preparing meals alongside her mother, sitting with her sister by the fire in the evenings to mend clothes. From theminute she rose in the morning until she took to her bedroll, she was surrounded by a clutter of other people, assailed by voices and needs, stories and complaints. Sometimes it made her feel as if she were constantly standing in the middle of a hard wind, blown in every direction.”

“What looked like a red, wet smear in the grass turned out to be a body. He shut his eyes momentarily. He’d faced ugly things before but was hard-pressed to recall ever seeing something as monstrous as this. He opened his eyes again. The head was intact. In fact, if you only looked at the face you wouldn’t think anything was wrong. The boy’s eyes were closed, long brown lashes stark against chalk-white cheeks. His fine blond hair was plastered against his skull, his tiny mouth closed. He looked peaceful, as though he were sleeping. But from the neck down . . .”

“He felt stung, struck by the memory of his grandfather telling him, N30 Don’t tempt the devil, boy, as though he could still feel the crack of the old man’s belt buckle in his face after he was caught kissing a neighbour’s daughter out in the churchyard when he was nine years old. How miserable he’d been growing up in his grandfather’s house. And angry at his father, too, for leaving him and his mother there.”

“Human sacrifice is extremely rare among the plains tribes. Ancient cultures to the south, the Mayans and Aztecs, are known to have practiced ritual human sacrifice, but from what I’ve read it’svirtually unheard of north of the Rio Grande.”

“They were intrepid pioneers, about to blaze a new trail through the wilderness; their names would go down in history.”

“Something terrible had compelled her across the thin frozen ice of the river that winter day, an evil that lived among them that he had failed to see. In this, at least, his grandfather had been correct. Evil was invisible, and it was everywhere.”

“But still, Stanton knew the human mind was susceptible to insidious influence, especially when people were hungry, tired, and afraid.”

“And what’s your opinion of this trail? Is it any good? We have ninety people in our party, most of them women and children.” Stanton wasn’t sure why he bothered to ask. Fort Bridger’s fortunes depended on the success of this trail. He hoped Christian decency would keep these men from lying to them outright, but he’d been disappointed by Christian goodness in the past. Few men valued the lives of strangers over profit.”

“Shipwrecked men survived by eating the bodies of sailors who perished before them, Bryant knew. It was the law of the sea. He’d even heard a story about it once. Something Lavinah Murphy had been saying around a fire back in the early days of their journey, a story about a German shipwreck and the unlucky survivors.”

“Death had been chasing them a long while, she knew, but it had never gotten this close. Now it was at their heels like a begging dog; the smell of it was in their hair and under their fingernails. It was everywhere, and it was waiting.” 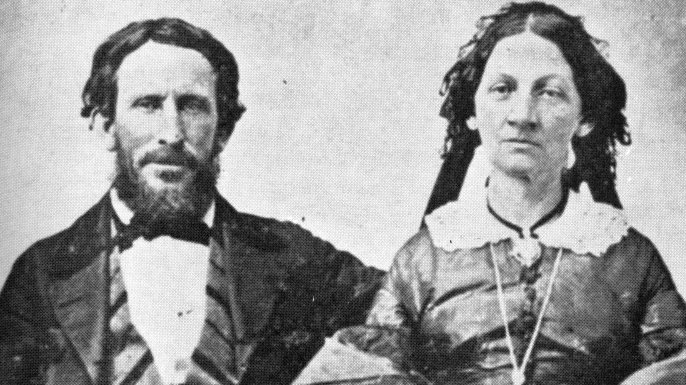 James F. and Margaret (Keyes) Reed, who were members of the Donner Party. (Credit: Public Domain)

MAJOR FILM DEAL: 20th Century Fox has acquired The Hunger, which will be produced by Ridley Scott’s company Scott Free. It will be directed and scripted by Luke Scott, Ridley Scott’s son, who has worked on films like Prometheus, The Martian, and Alien: Covenant.

Reviewed by Lou Pendergrast on 09 March 2018