Review: The Growing Things and Other Stories by Paul Tremblay - More2Read

The Growing Things and Other Stories by Paul Tremblay 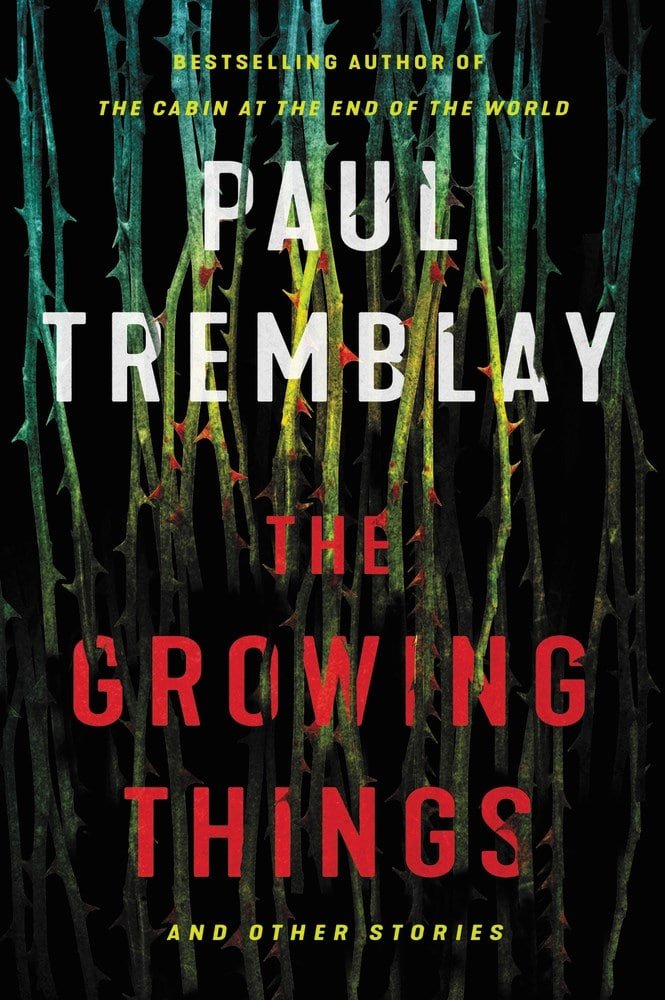 The Growing Things by Paul Tremblay:

A chilling collection of psychological suspense and literary horror from the multiple award-winning author of the national bestseller The Cabin at the End of the World and A Head Full of Ghosts.

In “The Teacher,” a Bram Stoker Award nominee for best short story, a student is forced to watch a disturbing video that will haunt and torment her and her classmates’ lives.

Four men rob a pawn shop at gunpoint only to vanish, one-by-one, as they speed away from the crime scene in “The Getaway.”

In “Swim Wants to Know If It’s as Bad as Swim Thinks,” a meth addict kidnaps her daughter from her estranged mother as their town is terrorized by a giant monster . . . or not.

Joining these haunting works are stories linked to Tremblay’s previous novels. The tour de force metafictional novella “Notes from the Dog Walkers” deconstructs horror and publishing, possibly bringing in a character from A Head Full of Ghosts, all while serving as a prequel to Disappearance at Devil’s Rock. “The Thirteenth Temple” follows another character from A Head Full of Ghosts—Merry, who has published a tell-all memoir written years after the events of the novel. And the title story, “Growing Things,” a shivery tale loosely shared between the sisters in A Head Full of Ghosts, is told here in full.

From global catastrophe to the demons inside our heads, Tremblay illuminates our primal fears and darkest dreams in startlingly original fiction that leaves us unmoored. As he lowers the sky and yanks the ground from beneath our feet, we are compelled to contemplate the darkness inside our own hearts and minds.

Morbid tales, haunting, fears and longings, dwellings, ghosts, devils, creatures, monsters inner and outer, melancholy, sisters, fathers and sons, teachers, men and women, and Merry and Marjorie from Head Full of Ghosts back in the narrative.
A myriad of bat shit craziness presented before the reader, hypnotically evoking within the reader all kinds of things, growing things, ones of fears and longings, and with that maybe some courage with all the terrification before you with nicely crafted voices and stories.

The tales I loved the most:

Growing plants and mysterious knocking at the door an isolation tale with Majorie and Merry from Head Full of Ghosts.

Where We All Will Be

A story on a monster, the swamp kind, official or unofficial.
Concept of monsters elaborates on too with some satire.

“There’s a monster in the swamp. It eats cats and dogs; small, unwanted children, you know the type; and the occasional beautiful woman. Only rarely, so far, once a century, will it devour the angry torch-wielding villagers—your potential neighbors.”

A Haunted House Is a Wheel upon Which Some Are Broken

Nostalgia with scary things, reimagining, I see dead people in a house kind of thing, ghost and one woman’s interlude through re-walking with ghosts that scare her and the loss of loved ones.

“The house is a New England colonial, blue with red and white shutters and trim, recently painted, the first-floor windows festooned with flower boxes. She stands in the house’s considerable shadow. She was once very small, and then she became big, and now she is becoming small again, and that process is painful but not without joy and an animal sense of satisfaction that the coming end is earned.”

It Won’t Go Away

Shock and devastating recounting of last few days of peter’s death by his friend.
Two authors and writers, book readings, signings, and the terrible suicide, with the darkness and shadows around it and how he and others reacted to it.

“Nine days ago, I received an envelope in the mail from Peter. It was exactly one month after he killed himself. I’d been in my new apartment for ten weeks. Time is not an arrow. It is a bottomless bag in which we collect and place things that will be forgotten.”

The Society of the Monsterhood

More monster than Grendel, bully and monster, the story of the society, KG and the monster, myth and urban legends.

“The well was hundreds of years old. Its wall was a ring of stone and crumbling mortar, jutting three feet above the ground with an opening that had a circumference wide enough to fit Daniel Webster and the devil.”

A New Hampshire house, a cabin in the woods, not that book you know the one The Cabin at the End of the World.
There is an ailing mother and death, and a mysterious well with creature accompanying it, one girl armed with sketch pad draws though here loss, life, and conflict with hero and monster.

Paul Tremblay has won the Bram Stoker, British Fantasy, and Massachusetts Book awards and is the author of The Cabin at the End of the World, Disappearance at Devil’s Rock, A Head Full of Ghosts, and the crime novels The Little Sleep and No Sleep Till Wonderland. He is currently a member of the board of directors of the Shirley Jackson Awards, and his essays and short fiction have appeared in the Los Angeles Times, Entertainment Weekly online, and numerous year’s-best anthologies. He has a master’s degree in mathematics and lives outside Boston with his family.