The Gentling Box by Lisa Mannetti

The Gentling Box by Lisa Mannetti 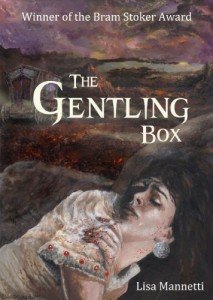 Mannetti’s prose has teeth; sharp teeth that grab on and refuse to let go.”
– J.A. Konrath, author of SHAKEN and ORIGIN

“A keenly conceived and richly executed cornucopia of the blackest magic. Mannetti’s prowess as a writer hauls the reader into a shimmering, phantasmagoric demesne of relentless suspense and high-creep-factor chills, and doesn’t let go until the final page. This story is a dark work of art.”

– Edward Lee, author of CITY INFERNAL and BRIDES OF THE IMPALER.

Set in 19th century Hungary and Romania, The Gentling Box is the Bram Stoker Award-winning novel about a half-gypsy horse trader named Imre and the terrifying choices he must make in order to save the family he loves from the curse known as the hand of the dead.

After a vengeful sorceress inflicts him with a mortal disease, Imre discovers, to his horror, that the only way he can prevent his beloved wife Mimi and their young daughter Lenore from falling prey to the terrifying gypsy curse is to confront the single most horrendous moment of his life. He must decide if he can, once again, face the dark, hideous secrets of the gentling box.

Lisa Mannetti’s has also authored a macabre gag book, 51 FIENDISH WAYS TO LEAVE YOUR LOVER, as well as non-fiction books, and numerous articles and short stories in newspapers, magazines and anthologies. Her story, “Everybody Wins,” was made into a short film by director Paul Leyden starring Malin Ackerman and released under the title Bye-Bye Sally.

Watch the book trailer at: http://www.youtube.com/watch?v=SeBiZmebP…

Visit the Shadowfall Publications website for the latest information about your favorite authors.

Finally i got to read her debut that won the acclaimed Bram Stoker award, previously her novella Deathwatch was a real horror story with dark atmosphere and shocking scenes of blood. This novel is written with the same dark chill oozing with history and presence. She transports you to Romania and a gypsy community, she really makes you feel you are there with the main protagonist. A man who like most have responsibility in the tightly knitted gypsy community, a husband to Mimi his wife and father to one girl.

Be warned you will encounter debauchery and nightmares, but also a heartfelt story with love.

Beauty is in the eye of the beholder some say, well with the main protagonist he seems to see one woman from his youth with a eye of beauty that others can’t quite see. It all becomes disastrously bad for this honey-trap he finds himself in and his family are in an ever increasing peril. There is talk a witch in the community who can raise the dead some said and soon the community are to see the truth of the matter. In a very imaginative tale of horror he finds himself transported back to brutal memories of Gentling. He has memories of when his father gentled the horses and how a harrowing past of his youth it was, one to return in nightmares and then reality. Can he use what he once dreaded and hated can he use the Gentling box on a human soul?

“Mountains do not meet, but people do.”

“A she-demon who drove men-womenn-mad. Her feast, held to celebrate-to appease-i thought, and felt my stomach tighten.”

“To be raised up is more terrible than you know. All the desolation in the world sweeps like a nightwind howling through the vast emptiness that your being. And there is only the will of the one who commands.”

View all my reviews

Reviewed by Lou Pendergrast on 02 November 2011