The Forgotten Girl by Rio Youers 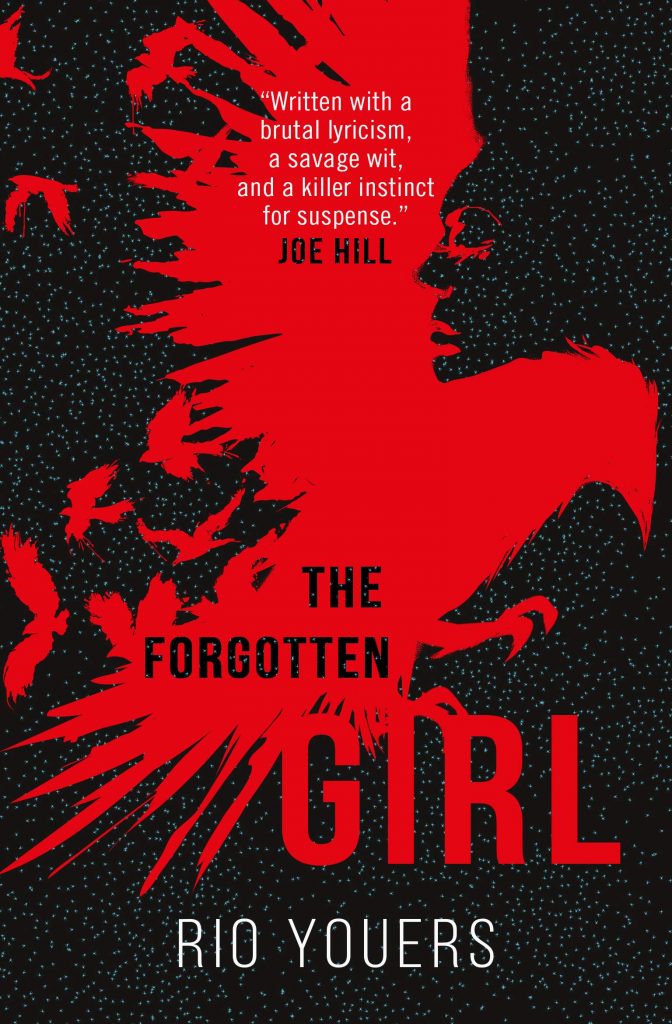 “She possesses a unique and powerful ability. Just like we can erase data from a computer hard drive, Sally can erase memories from a person’s mind.”
Abducted and brutally beaten by a group of thugs, street performer Harvey Anderson is convinced he’s a victim of mistaken identity when they demand to know the location of his girlfriend, Sally Starling. Harvey Anderson has been single for years.
She dominated my dreams. Sometimes as a lover, more often as a scared, lonely girl running from something that slathered and swooped. I woke with her name on my lips, clutching the empty half of the bed, knowing beyond all doubt that she should have been next to me.
Aided by his thugs, a sinister man known as “the spider” has tracked Sally to Harvey. He has pursued her for nine years, desperate to possess her remarkable talents. Yet emotion runs deeper than memory, and so Harvey goes looking for a woman he loves but can’t remember, and encounters a danger beyond anything he could ever imagine.

“How Youers manages to skillfully weave character development into a book filled with edge-of-your-seat action is a testament to his writing skills…a smart thriller that also explores the power of love and memory. Highly recommended.”
–Booklist (starred review)

“Emotionally evocative prose…offers everything that fans of intelligent suspense could wish for.”
–Publishers Weekly (starred review)

“The Forgotten Girl combines elements of the supernatural with mystery in a surprisingly satisfying blend that is as thought-provoking as it is entertaining.”
–Bookgasm

“If you like thrillers, you won’t want to miss this one.”
–The Washington Independent Review of Books

“Sometimes it’s the story that thrills us. Sometimes it’s the writer. Whether we know it or not, we always want both. The Forgotten Girl gives us both….halfway through…you think, ‘I’d be glued to absolutely anything Youers is spinning.'”
–Josh Malerman, author of Bird Box and Black Mad Wheel

“An absolute rocket–The Forgotten Girl is a supernatural thriller that thunders along at Mach 5 from the first page to the last. Written with a brutal lyricism, a savage wit, and a killer instinct for suspense, it’s a work that marks out Rio Youers as a big star.”
–Joe Hill, New York Times Bestselling Author of The Fireman and Heart-Shaped Box

“A page-turner of a novel with concepts that twist your mind, characters that tug at your heartstrings, and a narrative that leaves you breathless. The Forgotten Girl is a supernatural thriller that will ensure you never forget Rio Youers.”
–Sarah Pinborough, New York Times Bestselling Author of Behind Her Eyes

“Rio Youers writes with a magic all his own. The Forgotten Girl is a unique and twisted thriller, loaded with suspense but also laced with beautiful heartbreak. Youers is a rare and original voice, and I can’t wait to see what he does next!”
–Christopher Golden, New York Times bestselling author of Snowblind and Dead Ringers

“The Forgotten Girl has everything going for it. Rio Youers has seasoned an original plot with engaging, unpredictable characters, and a totally badass villain, concocting a heady thrill-fest that will keep you turning pages into the wee hours.”
–F. Paul Wilson, New York Times bestselling author of the Repairman Jack series

“Rio Youers is one of the most vital, most exciting young talents to come along in this decade . . . [He] writes beautiful phrases and sentences, and he has an instinctive feel for horror’s flash points, those moments in a novel when its author must demonstrate that he can keep his head while his readers are cheerfully losing theirs.”
–Peter Straub, New York Times bestselling author of Ghost Story and Shadowland

“Canadian author Youers (Westlake Soul) makes his U.S. debut with a paranormal thriller distinguished by subtle characterizations and emotionally evocative prose. Some vicious thugs abduct street musician Harvey Anderson from his apartment building in Green Ridge, N.J., and give him a savage beating. They want to know the location of Sally Starling, a name he doesn’t recognize, even after they show him a copy of the rental agreement that he and Sally signed in 2010 for the Green Ridge apartment…Harvey’s compelling, moving search for Sally and the truth offers everything that fans of intelligent suspense could wish for.” –
-Publishers Weekly (Starred Review)

“Youers does a remarkable job keeping the book on an even keel . . . drawing a fine domestic portrait of a tight-knit family under pressure while asking compelling questions about the nature of consciousness . . . and what it means to be human.”
–National Post (Canada) on Westlake Soul

Opens with scene of violence and one beaten down by men in search of a girl.
Cowardice must retreat and his busking time aside and some super powers called upon, an ordinary man, Harvey, at war with teleplay and other psychic abilities aided by only vague memories of love our main protagonist finds himself up against a super villain Lang, who established an organisation Nova Oculus, in search of the forgotten girl by any means necessary, Harvey must get to her first and piece together fragmented memories of the dancing girl and remember.

“I considered this enigmatic girl, blithe enough to swirl in the ocean breeze, dangerous enough to excise entire moments from my life. She terrified, fascinated, mystified me. I wanted to track her down and reclaim my memories. I wanted to run away and never look back.”

Memories lost, taken, then returned.
There is a Serial killer to be caught too,
“There had been three unsolved murders in Green Ridge in the last three years. All women. Beaten, raped, stabbed to death. The killer was extremely careful, leaving no incriminating evidence.”

A need for safety and protecting the masses from control and take over with an Orwell quote Harvey ponders, “Power is in tearing human minds to pieces and putting them together again in new shapes of your own choosing,” fates intertwined into an immersive thriller amalgamating concepts of supernatural, science fiction, and fantasy.