Review: The Flicker of Old Dreams by Susan Henderson - More2Read

The Flicker of Old Dreams by Susan Henderson 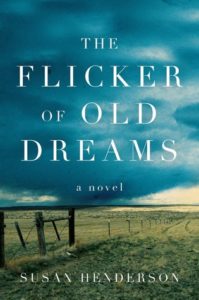 With the quiet precision of Jane Smiley’s A Thousand Acres and the technical clarity of Mary Roach’s Stiff, this is a novel about a young woman who comes most alive while working in her father’s mortuary in a small, forgotten Midwestern town

“The dead come to me vulnerable, sharing their stories and secrets…”

Mary Crampton has spent all of her thirty years in Petroleum, a small Midwestern town once supported by a powerful grain company. Living at home, she works as the embalmer in her father’s mortuary: an unlikely job that has long marked her as an outsider. Yet, to Mary there is a satisfying art to positioning and styling each body to capture the essence of a subject’s life.
Though some townsfolk pretend that the community is thriving, the truth is that Petroleum is crumbling away—a process that began twenty years ago when an accident in the grain elevator killed a beloved high school athlete. The mill closed for good, the train no longer stopped in town, and Robert Golden, the victim’s younger brother, was widely blamed for the tragedy and shipped off to live elsewhere. Now, out of the blue, Robert has returned to care for his terminally ill mother. After Mary—reserved, introspective, and deeply lonely—strikes up an unlikely friendship with him, shocking the locals, she finally begins to consider what might happen if she dared to leave Petroleum.

Set in America’s heartland, The Flicker of Old Dreams explores themes of resilience, redemption, and loyalty in prose as lyrical as it is powerful.

Praise for The Flicker of Old Dreams:

“Susan Henderson offers us the wondrous, sharp picture of the small town of Petroleum, Montana where the past comes back on two feet and a blizzard rages. The Flicker of Old Dreams is a fine novel, heartfelt and bracing company. It is a gem.” — Ron Carlson, author of Five Skies

“Susan Henderson’s The Flicker of Old Dreams is a clear-eyed, wise, and poignant tale of losses and gains, told with tremendous empathy and grace.” — Therese Anne Fowler, New York Times bestselling author of Z: A Novel of Zelda Fitzgerald

“The Flicker of Old Dreams is at once a vivid and wildly compelling study of small town American life and an intimate and incisive exploration of the human condition, from love to loss and beyond.” — Jonathan Evison, the New York Times

“Susan Henderson has secured her position as one of my favorite novelists. You won’t be able to turn away from this tender, elegiac and haunting novel that beautifully exposes the human heart, the human body, and the human condition.” — Jessica Anya Blau, author of the nationally bestselling novel The Summer of Naked Swim Parties

“This novel is so breathtakingly good, so exquisitely written. About a female mortician, about a childhood tragedy that still haunts a damaged young man, about the endless landscape and about those tiny sparks of possibility. Oh my God. Trust me. This book. This book. This Book.” — Caroline Leavitt, New York Times bestselling author of Cruel Beautiful World

“A truly magnificent work of art. The soul energy that is pushing through this story is unstoppable, beautiful, vulnerable, powerful.” — Jessica Keener, author of Night Swim and Strangers in Budapest

“Like the wind scours paint from an old grain silo, Susan Henderson’s writing scours away all the pretend niceness of small town life in Montana to reveal the frayed and patched nature of humanity.” — Helen Simonson, New York Times bestselling author of The Summer Before the War

First person narrative with a distinctive vivid voice of living in a midwest small town with its joy and strife, dreams lost and newly founded. As many lay dying she is in her place of work, working on the dead, as her craft is to bring some beauty to the dead as an embalmer, she’s the embalmer and her father is the funeral director.

The author successfully transports the reader to this town called Petroleum with a narrative delivering a meditation on loss, love, death, family, resilience, and identity with heart felt hypnotic prose. A luminous account on feelings as an outsider in ways, to the norms and traditions, and paternal love in tow and breaking out from home and crucible.

The author crafted some great sentences in this tale, a prose with empathy, a world the narrator loves and loathes at the same time, great sentences expounding on the complexities and fragilities of the human heart one that echoes John Steinbeck, Flannery O’Connor, and William Faulkner.

“They weren’t unkind to me, not yet, but I was peculiar to them. Almost all these kids were the sons or daughters of ranchers. Even if one parent was a shopkeeper, schoolteacher, postman, or waitress, the other likely worked on a ranch. No one else but my father and me lived in the funeral home.”

“Those who’ve heard of Petroleum are often surprised it’s still here. The town is primarily known for what it no longer has: oil. In its heyday, when the pumps drew black fuel from the ground, the population spiked to almost two thousand. But many were only passing through, here to make a quick buck and then move along when the wells ran dry.”

“Secretly I think of myself as an artist. Drawing was my obsession in high school and, briefly, I dreamed I could make a career of it. My mind, my hands have always wanted to create art. Embalming is not completely separate from that impulse. My job is a study of the human form, its beauty and vulnerability. I take pleasure in choosing each tool and color, in making a clean stitch, in positioning the body to create a portrait.”

“My mother has followed us into the house. My mother is the name I’ve given his grief. She was gone long before I knew what death was so, for me, she is an abstract loss, a game of guessing at the life I might have lived. My mother is a collection of stories and inanimate objects. She is a wedding ring in my father’s bedside drawer, a rosehips-flavored tea bag in the back of our kitchen cupboard that we both refuse to use or throw out. She is a picture of someone standing on the rims too far away to see. She is a book underlined only to page seven. She is a pair of burnt rosebushes in the yard that Pop won’t dig up. She is the line between his eyebrows, the groove where his smile would be. She is a feeling in the gut I can’t name or move.”

“A mortician is an illusionist. The goal is to cushion reality, slow down how fast the hurt seeps in. Cuts are filled, the gray pallor painted over. Lips moistened with tinted cream. Hair washed and combed but not overly styled. The embalmer’s threads and glue and brushstrokes must be invisible so that when a family looks into the face of a loved one for the last time, there is no sign of illness, injury, or suffering. The grieving can pretend that their loved ones are merely sleeping. That they will hear you when you bend over to whisper all you had meant to say.”

“We don’t quite fit here, do we?” he says, reaching for another rock and brushing it clean of snow. “Sometimes that’s a lonely place to be, and yet, you don’t really want to be on the inside, either, where you feel pressure to be someone you’re not.” He has identified something I’ve felt but never put into words. That feeling of being most alone in company, the frustration of trying so hard to enjoy fishing, hunting, and basketball, when I just can’t. I’ve lived in Petroleum my whole life, but somehow I feel like an outsider.”

“The wind is a low hum in my ear as we walk across the powdery earth, stepping over slabs of brittle sandstone, animal tracks and droppings. This land still takes my breath away, the sound of birds waking, the far-off mooing, the grass swaying, nothing ever truly still. At the crumbling edge of the rims, we look out over the town and the broken rock below. I watch the movement of men and trucks and cattle.”

“Instead, they experience God in the magnificent earth and sky, in the first sunlight over the rimrocks, in the blue blue snow at twilight, in the care they invest in this land and its creatures, never a guarantee of a return for their labor, forever at the mercy of a force greater than themselves.”

“We have forgotten what we have in common. We’ve forgotten when we walked to school together, when we picked up trash from the same storm. All of us have worked since we were children, on ranches, at the elevator or grocery store. In summers, the fishermen of our families likely kept jars of worms in the fridge. Go into any of our homes and I bet you’ll find a Charlie Russell painting and a Louis L’Amour novel. Walk outside and we hear the same cattle, feel the same wind. How strange that we find ourselves at odds with people so similar to ourselves that someone from another town could not tell us apart. Don’t we all just want simple things from this life—a use for our talents and passions, a chance at love, an old wound healed, someone to hold after a hard day?”

“What the people of this town seem to crave is a different ending to their story. But a mortician knows something about death. Can sense it coming without the need to turn away. Like old age, it comes whether you fear it or not. And hits hard even when you expect it.

“There are not many left like these folks. The child who, without malls, fast food, or movie theaters, spends his free time exploring abandoned buildings, sometimes falling through collapsed boards, surviving such falls with glee. The rancher who wakes up at five in the morning, and before he’s had anything to eat, steps into his mucking boots and feeds the stock. The grandmother who must get out of her truck at every cattle guard, opening the gate in rain and snow and subzero temperatures. These are people with hands rough from labor, and faces creased from a life lived outdoors, from worry over loved ones and making ends meet. There is a spirit here of durability, of hard, physical work, of sacrifice and survival.”

“Tonight when the sun drops low, when the tractors and machines are shut off, the hot engines smoking and clicking as they cool, when the cattle have been fed and are left to their mysterious chattering, the remaining people of this town will head toward their lighted homes, the air pungent with sagebrush, jackrabbits coming out of their burrows to forage, the brown remnants from winter blowing away with the wind. They will untie their worn and dirty work boots and set them outside the door.

“For those who stay, Petroleum is home. This is what they know—this life, this land—it is not only where they live; it is who they are. They may be a dying breed, but if they are dying, they would like to die here. For however many days or years remain, they’ll choose to end their evenings looking up from their battered porches, wrapped in stars.”

Reviewed by Lou Pendergrast on 13 March 2018