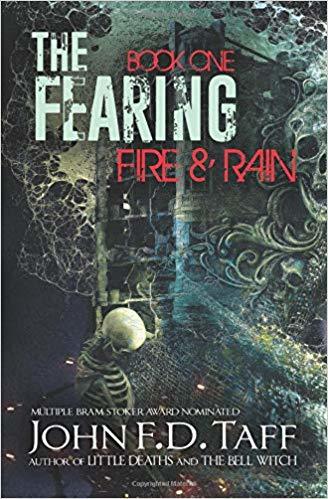 John F.D. Taff’s highly-anticipated epic supernatural thriller, The Fearing, begins with Book One: Fire & Rain where humanity faces a series of catastrophes spawned by a worldwide event that unleashes all of mankind’s greatest fears.

In the American high desert, vacationers returning from a road trip are thrust into a heart-stopping flight from death as they try to avoid a cataclysmic end. In rural Missouri, the lives of a group of high school students are destroyed after their small town is devastated and they’re forced to confront the end of everything they’ve ever known.

And on the eastern seaboard, there’s someone else. An enigmatic man who thrives on despair and embraces all fear. A man with his own dark and sinister goals. Someone who wants to ensure humanity goes out with the biggest bang possible.

“The Fearing isn’t only John F.D. Taff’s best book to date, it’s the kind you put on the shelf reserved for the ones that really did something to you, emotionally, intellectually, physically. A modern master at play..”
– Josh Malerman, Bram Stoker Award®-nominated author of the New York Times bestselling Bird Box

“John F. D. Taff has rapidly become one of my favorite writers in the horror genre. His horror is grounded in our day-to-day lives, in our families, our work, our most private thoughts. His stories vibrate with emotion and life and his prose is cathartic, deeply satisfying, like popping the bubbles in bubble wrap.”
– Ray Garton, Grand Master of Horror and author of Live Girls and Ravenous